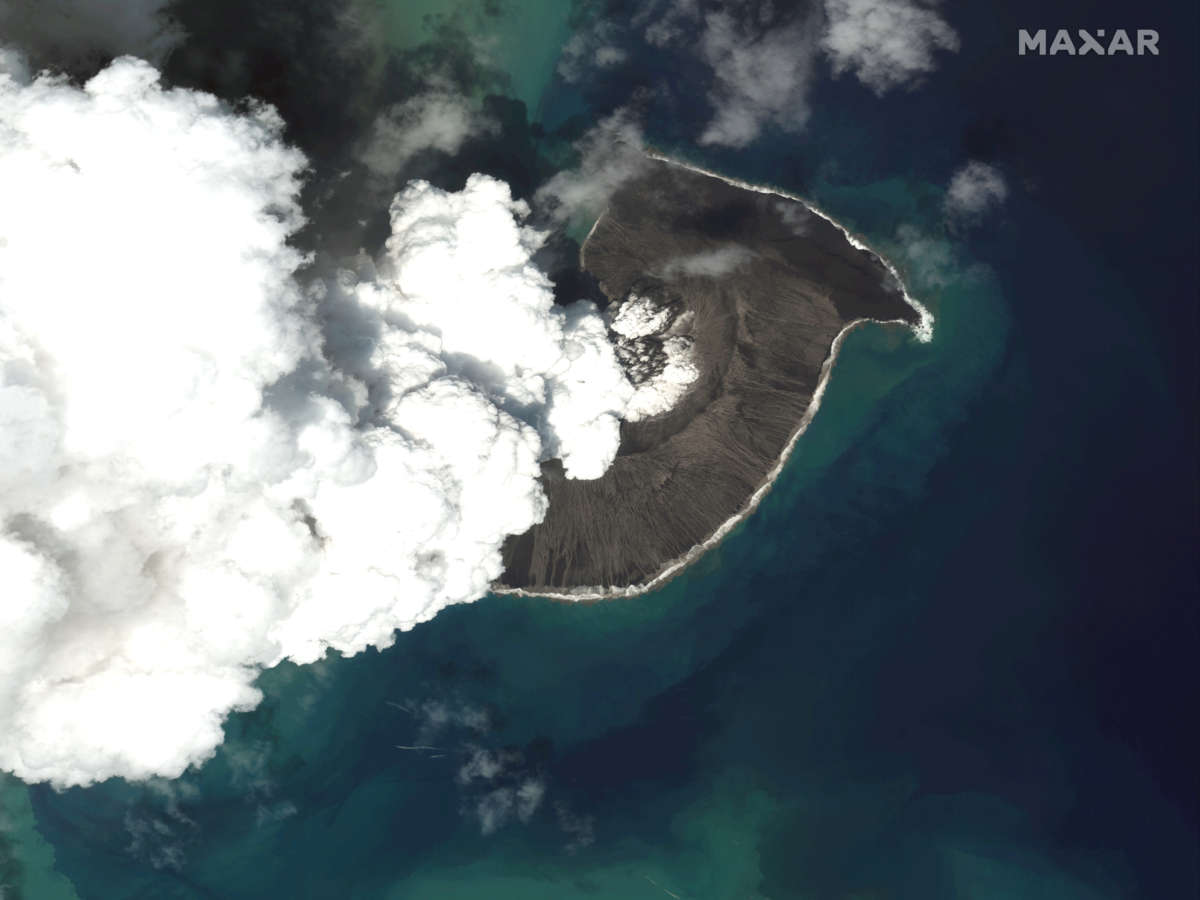 The Tonga volcano on December 24 2021 as seen from a satellite. The eruption turned explosive, in what nuclear monitors say was the biggest bang they've ever recorded.

The explosive volcanic eruption in Tonga on Saturday appears to dwarf the largest nuclear detonations ever conducted, according to a global group that monitors for atomic testing.

The shockwave from the blast was so powerful that it was detected as far away as Antarctica, says Ronan Le Bras, a geophysicist with the Comprehensive Nuclear-Test-Ban Treaty Organization in Vienna, Austria, which oversees an international network of remote monitoring stations.

In total, 52 detectors around planet Earth heard the low-frequency boom from the explosion as it travelled through the atmosphere. It was the loudest event the network had detected in more than 20 years of operation, according to Le Bras.

“Every single station picked it up,” he says. “It’s the biggest thing that we’ve ever seen.”

As large as the explosion was, it was not nuclear in any way, Le Bras adds. Radioactive fallout, the telltale sign of a true nuclear explosion, was not detected at any station.

The shockwave felt ’round the world

The Comprehensive Nuclear-Test-Ban Treaty Organization (CTBTO) was set up in 1996 to monitor for nuclear weapons tests anywhere on Earth. Although the test-ban treaty has yet to be enter into force, the organization has set up an extensive network designed to watch for signs of a nuclear blast.

In the past, the network has picked up North Korea’s underground nuclear tests, and radioactive fallout from the Fukushima nuclear accident.

This time, seismic, hydroacoustic and infrasound stations all picked up the violent, explosive eruption of the volcano, which took place on 15 January. Infrasound, which listens for sound waves lower than what humans can hear, is particularly useful at detecting the rumble of far-off explosions.

According to Le Bras, atmospheric measurements in Austria, roughly 10,000 miles from the eruption site, detected a shockwave that was two hectopascals in strength. By comparison, the largest nuclear weapon ever tested, the Soviet Union’s Tsar Bomba, generated a shockwave of just 0.5-0.7 hectopascals in New Zealand, which sits at a comparable distance from Russia’s nuclear test site in Novaya Zemlya.

Similar readings were picked up in other parts of Europe.

Even now, days after the eruption, Le Bras says the network can continue to detect the faint echo of the shockwave as it circles the Earth’s atmosphere again and again.

Le Bras declined to predict just how big the volcanic eruption in Tonga was, citing the CTBTO’s rules against estimating the size of nuclear detonations. But Margaret Campbell-Brown, a physicist at the University of Western Ontario in Canada who uses infrasound to study meteors as they enter the atmosphere, says she thinks it was at least as large as the 50 megaton Soviet test in 1961.

“A very rough back-of-the-envelope calculation suggests that the energy was around 50 megatons,” says Campbell-Brown. “We haven’t done the real analysis that it would need, but it doesn’t seem like it would be smaller.”

A previous estimate from a team of NASA scientists put the explosion at perhaps 6-10 megatons, but Le Bras says he believes the infrasound data shows the explosion might be far larger.

“I think these estimates are underestimating the yield,” he says.

Jim Garvin, the chief scientist at NASA’s Goddard Space Flight Center in Greenbelt, Maryland who made the original estimate, is more cautious.

“We have to be careful to compare it to a nuclear explosion, because it’s a different process,” Garvin says. His team’s calculations are based purely on the energy required to destroy the island around the volcano. That island had been closely monitored since it first formed in 2015, and Garvin says he believes the group’s calculations are accurate for the energy required to obliterate it.

“Our estimate is based on moving stuff,” he says. But it does not include other forms of energy, such as the energy released by the water turning to steam as it touches molten rock, or magma.

It will take time, he believes, to get a true estimate of the size of the Tonga eruption: “When the teams all get together and put these numbers together, the energy balance will come out,” he says.

The exact cause of the explosive eruption at the island, known as Hunga Tonga-Hunga Ha’apai, remains a mystery. Garvin and his team believe the root cause was a massive influx of seawater into a chamber filled with magma. The island had been growing rapidly as recently as December of 2021, and Garvin suspects that the “plumbing” beneath the surface shifted as the island expanded.

But even that explanation requires a lot more fleshing out, says Ken Rubin, a volcanologist at the University of Hawaii at Manoa. Simply putting rock and magma into contact won’t always generate an explosion, he says.

“There’s this kind of golden ratio where you have just the right amount of both,” Rubin says. At that point, water flashing into steam can expose more molten rock, allowing more water to flow in, in what he describes as a “chain reaction.”

The eruption is especially puzzling because the explosion was so powerful given the amount of magma believed to be released by the volcano. Volcanologists suspect it was much smaller than the eruption at Mt. Pinatubo in 1991. Gasses released by that eruption changed the weather on a global scale, something that is not expected from the Tonga eruption.

The extent of the eruption’s effects on the island nation of Tonga are just now becoming clear. So far, the government has reported three deaths, but many dozens of homes and other structures were damaged by a tsunami. Ash has polluted the ground and water, raising fears of shortages. Relief flights have begun to arrive from Australia carrying drinking water, but so far the Tongan government is trying to limit contact because of fears about spreading COVID-19 among the nation’s inhabitants.

Rubin says that shallow ocean volcanos like the one at Hunga Tonga-Hunga Ha’apai exist around the globe, but they are for the most part unmonitored. That’s in large part because it’s expensive to develop and maintain undersea instruments.

He thinks the eruption in Tonga may focus new resources on studying and monitoring volcanic activity under the sea.

“The vast majority of volcanoes on the planet are in the ocean, not on land,” Rubin says. “Many of them are very deep, but there are enough of these submarine volcanoes in this right depth range … that we should pay more attention to them.”