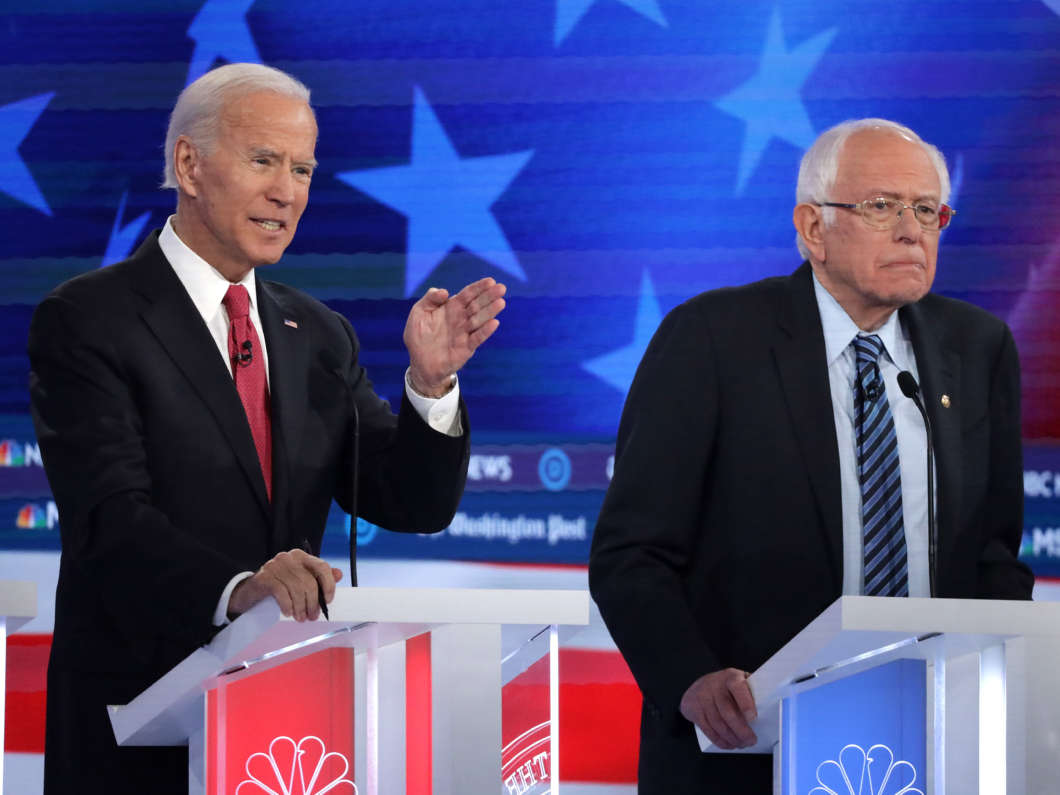 Former Vice President Joe Biden and Vermont Sen. Bernie Sanders lead the crowded Democratic field, pulling in together about half of the support of Democratic voters and Democratic-leaning independents, according to the latest NPR/PBS NewsHour/Marist Poll.

Biden leads with 24%, followed closely by Sanders at 22%. Massachusetts Sen. Elizabeth Warren is third with 17%, followed by South Bend, Ind., Mayor Pete Buttigieg at 13%, all together making up a clear top tier of four candidates.

The poll comes ahead of the next Democratic debate, this Thursday in Los Angeles and sponsored by the PBS NewsHour and Politico.

Importantly, while two-thirds of Democratic voters and Democratic-leaning independents say they are satisfied with the Democratic field, three-quarters (76%) say they could change their minds on whom they currently support.

So this is potentially a very fluid race, and it is why, despite Biden leading consistently in national polls, there has been so much movement in early-state polls.

While Biden continues to lead in national polling, when it comes to all-important state polls, Buttigieg has seen a surge of late. He narrowly leads Sanders in Iowa and narrowly trails him in New Hampshire, with Biden and Warren not far behind, according to RealClearPolitics’ average of the polls.

“We’re looking for late action, because it’s so fluid,” Lee Miringoff, director of the Marist Institute for Public Opinion, which conducted the poll, said of potential change before the first nominating states cast votes. “I think we’re looking at the last surge” for who could win.

Different coalitions for the Democratic candidates

The top candidates draw support from different parts of the Democratic Party, the poll shows.

Notably, though, Sanders is the candidate who narrowly leads with nonwhite voters, 29% to 26%, over Biden. This might be because of Sanders’ strength with younger voters of color and Latinos. But the margins of error with these subgroups are too high to draw any definitive conclusions.

Buttigieg leads with whites with a college degree (23%), including women. Again, Warren is a close second with these groups. So Warren is competing on two separate fronts for support — with the progressives who might be inclined to the policies of Sanders and with Buttigieg for college-educated whites.

By a 54% to 44% margin, Democratic voters think it’s more important to have a nominee who has the best chance of beating Trump than someone who shares their position on most issues.

But Biden leads handily when it comes to those who say it’s more important to continue Obama’s policies — 34% to Buttigieg’s 19%, Warren’s 17% and Sanders’ 14%.

Democrats have put forward a host of policy positions. Some — like “Medicare for All” as a replacement for private health insurance, decriminalizing illegal border crossings and a universal basic income of $1,000 a month — provide warnings for the party, as none is able to win support from a majority of the overall electorate.

But Democrats are on solid ground when talking about stricter background checks for gun purchases, stricter regulation of prescription drug prices, a pathway to citizenship for immigrants in the U.S. illegally, a Green New Deal that addresses climate change by investing in green jobs and energy-efficient infrastructure, and legalizing marijuana.

All are supported by 60% or more of Americans.

There is also majority support for forgiving student loan debt for lower-income people, a wealth tax on wealth above $1 million, keeping but making changes to Obamacare, a public option for health care, a ban on semiautomatic assault-style weapons, a national minimum wage of $15 an hour, taxing carbon emissions and offering free tuition at public colleges and universities.

But Republicans give majority support only for gun background checks and stricter prescription drug regulations.