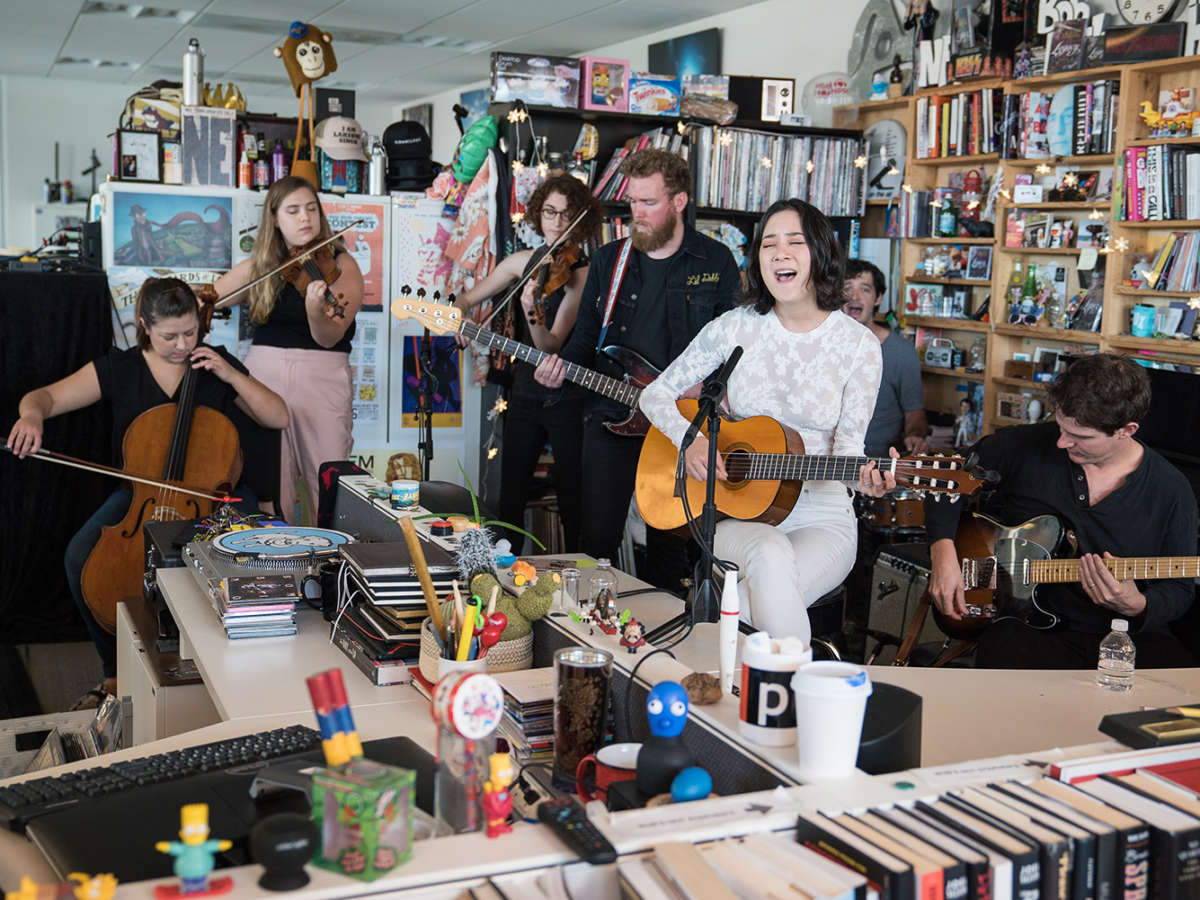 For Tiny Desk Playlists, we ask musicians, creators and folks we admire to choose the Tiny Desk concerts they’ve come to love. To celebrate Asian/Pacific Islander American Heritage Month, we’ve asked some of our colleagues to curate a playlist of their favorite concerts featuring artists who trace their ancestry across the Asian continent and the Pacific Islands.

This playlist was put together by members of NPR AZNs, an employee resource group (ERG) that supports over 100 staff members who identify as Asian, Asian-American, and/or Pacific Islander at NPR. As Alexandria Lee, from NPR’s Audience Relations team, and Emily Kwong, from Short Wave, explain: “Our group’s mission is to serve our community through advocacy and cultural visibility, elevating APIA voices within and beyond NPR. We’re very proud to curate a playlist for NPR Music and to present this compilation, thoughtfully curated by NPR AZNs members across the organization. They reflect on why these performances resonate with them.”

• Japanese Breakfast — There’s a sobriety — and a hint of bleak hilarity — that echoes in the voice of Michelle Zauner, who leads Japanese Breakfast. “I’m not the one I was then / My life was folded up in half,” she sings. “I guess I owe it to the timing of companions / I survived the year at all.” The three-song set is a kiss-mark impression of the band’s 2017 album, Soft Sounds from Another Planet. Something about Zauner’s storytelling sets off flares in my mind, and memories of home wash over me: drinking in a dimly lit parking lot bar, smelling the Kalachuchi trees on the way to class, feeling the dust settling under the arches of my feet. It’s not fair to say the kinship I feel is simply because of her words. Her arrangements color the image of the past that I find myself yearning for, too. —Alex Ramos, News Assistant, NPR Music

• Taimane — So much magic unfolds in Taimane’s Tiny Desk concert. Within her 2020 set, we hear her play fiery flamenco, an ode to Bach and a nod to her Hawaiian homeland, all on the ukulele. Band members on the guitar, violin and cajón join her to introduce her latest album, Elements, from which they bring the most feisty element — “Fire” — to the Tiny Desk. The intensity of their music is complemented by the performance of dancer Li’o, who moves through the intimate space to the beats of his stick percussion. Taimane’s concert is sensual yet ecstatic. And her energy — rooted in her people, communities and land — possesses the power to bring us home. —Janet W. Lee, News Assistant, TED Radio Hour

• Mashrou’ Leila — Like a lot of kids, I was subjected to my parents’ choice in music. In my home, my parents — who are immigrants from Lebanon — always played Arabic classics. Upon developing my own musical taste, I left Arabic music behind, and I’ll admit I haven’t actively listened to it in years. But when my Short Wave teammate Emily Kwong shared Mashrou’ Leila’s Tiny Desk with me, I became captivated by the performance. The band performed at NPR the day after the devastating shooting at Pulse Nightclub in Orlando in 2016. In response, the group opened its set with “Maghawir,” a song the group wrote in response to two nightclub shootings that took place in Beirut the year before. You don’t have to understand Arabic to feel the sorrow in this song — it’s harrowing and beautiful, just like the rest of Mashrou’ Leila’s Tiny Desk. And the more you read into the lyrics, the more captivated you’ll become. Its songs are imbued with striking references to topics like political unrest, LGBTQ+ rights, sexism and identity, which has caused a stir across the Arab world. This Tiny Desk is one of a kind, and regardless of the language you speak, Mashrou’ Leila’s gorgeous instruments, rich vocals and heart-rending lyrics make for a moving performance. —Rasha Aridi, News Assistant, Short Wave

• BTS — As a long time member of the ARMY, BTS’s fan club, I couldn’t have been more hyped to see BTS coming to Tiny Desk. I wish this was in-person, so I could say I bumped into a member in the hallway or something, but unfortunately the morning when it aired, I was a remote NPR intern sitting in my childhood bedroom. But as soon as Jungkook’s clear vocals for “Dynamite” hit, the group quickly proved that none of that mattered when it came to enjoying the music. Seeing the members of BTS bring their unique energy and be unapologetically themselves brought me so much joy. And once they started singing the melancholic “Spring Day,” I was hit with a rush of sadness. The lyrics and emotions made me realize that I hadn’t fully processed all my feelings that were built up from the beginning of the pandemic. When it ended, I felt cathartic but also immediately wanted the group to come back as the screen faded to black. As someone who grew up with few Asian figures in the West to look up to, seeing these talented Asian artists be recognized across the globe makes me incredibly proud. —Julie Zhou, Junior Software Engineer

• Raveena — I revisit Raveena’s Tiny Desk when I want to be transported by a pink-orange bubble of femme energy. Her hazy R&B sound and conscious cultivation of softness somehow makes the space feel like a bedroom. “Bloom” is my favorite song of the set — it evokes a kind of millennial flower power that is filled with love and vulnerability but also “attuned to all the bulls***.” I love how Raveena embraces and expands what it means to be South Asian; as she told them., “I want to create a space for all types of outsiders, survivors, queer people, people with depression, people who just felt like they didn’t fit growing up.” —Nicolette Khan, Researcher and Archivist

• H.E.R. — The first time I heard H.E.R. was on Solange’s Instagram story back in 2016. I heard the hauntingly sad yet beautiful intro to “Focus” and I have been hooked ever since. Early in her career, H.E.R. was known for avoiding questions about her personal life, instead telling folks to listen to her music, which speaks for itself. Because of that, I didn’t find out about her Filipina heritage until a couple of years later. To have a Filipino represented in any medium is always a win for all Filipinos, no matter where they are in the world. As a Filipino musician with parents who were both musicians in the Philippines, I am in true awe of H.E.R.’s genuine talent, especially at such a young age. Seeing her Tiny Desk live and meeting her is honestly the highlight of my career at NPR. It’s safe to say that this is a Tiny Desk performance I have on repeat on any given day — the instrumental arrangements and harmonies just hit different than the album versions. —Jessica Millete, Graphic Designer, Donor Communications and Engagement

• Lang Lang — From the gentle, beckoning melody of the nocturne alone, Lang Lang’s Tiny Desk almost made me cry. And it definitely made my mother cry. I first saw him play in-person after his memoir, Journey of a Thousand Miles: My Story, came out — and yes, my copy is signed in both English and Chinese. I’d heard his playing described as flashy, something as a child I wasn’t sure was a good thing. Now, his expressiveness at the piano means the world to me in the power, elegance and importance of showing up with both my heritage and my emotions. Lang Lang closes out with the Goldberg Variations, a set he’s studied for over 20 years. What a treat to hear his favorite one! —Tiffany Jeung, Senior Corporate Marketing Coordinator

• Toro Y Moi — Seeing Toro y Moi play the Tiny Desk was a full circle moment for me. I used to play songs from Anything In Return on my college radio show, back when I was DJing from 3-5 a.m. (which, looking back, might’ve been good training for my brief stint on the Morning Edition overnight shift!) While I was a student, Chaz Bear came to Austin and played a small house show at one of the co-ops. I can’t remember why I didn’t go, but I’ve always regretted it. So finally seeing him play at NPR was truly wild. I never thought I’d get to work in radio, so the whole experience felt surreal. This Tiny Desk features songs from Toro y Moi’s Outer Peace, an album that’ll get your head boppin’ and your shoulders shakin’. The album, in part, explores the relationship between a person’s identity and how that impacts how they exist in the world. It’s something Bear has thought about a lot, as he’s navigated his biracial identity. You can hear more in his 2019 conversation on Weekend Edition. —Audrey Nguyen, Production Assistant, Life Kit

• Anderson .Paak & The Free Nationals — I first saw Anderson .Paak perform at the Roots Picnic in Philadelphia in 2013. Then when I found out he was coming to NPR to perform a Tiny Desk I was very excited! I was especially excited to see him at the Tiny Desk because we share Korean heritage. In his music and social media, he embraces his Korean culture and shares the food he eats and his family traditions, and it reminds me of my family. —Kathleen Hoang, Manager of Business Partner Operations

• Mitski — The first time I saw Mitski’s Tiny Desk concert, I felt I was watching her experience multiple stages of grief. She later described the experience on Twitter by saying: “I showed up to NPR to be documented forever looking like a big pulsing void and radiating pain.” I’m struck by the deliberation of her choices, her commanding presence and yet how vulnerable and honest it feels, especially as she allows her voice to crack and warble as she sings. The restlessness of growing up in an endlessly violent world in “Townie” transitions into the anxiety of pursuing a dream fraught with fear and uncertainty in “Class of 2013.” Her anguish builds up to one perfect moment, when Mitski lifts her guitar, until she and the instrument are face to face, and belts into it, her vibrato harmonizing with the guitar’s resonant echo. I’ve returned to this Tiny Desk again and again, especially at times when I’ve been at my wits end with frustration and despair at, well, everything. In these three songs, I find release for the unseemly emotions swelling in my head — her music gives them legs, for jumping off balconies and tumbling into wet grass, and eventually walking toward something like acceptance. By the time she starts playing “Last Words of a Shooting Star,” my own pent-up anger has dissolved into a state of peace — a song about dying in a plane crash is maybe a strange place to find comfort, but something in Mitski’s voice leaves me feeling overwhelmingly hopeful as she sings, “while my dreams made music in the night / carefully / I was going to live.” —Summer Thomad, News Assistant, Code Switch

Tiny Desks In This Playlist