Notebooks And Pencils And Pens, Cha-Ching! 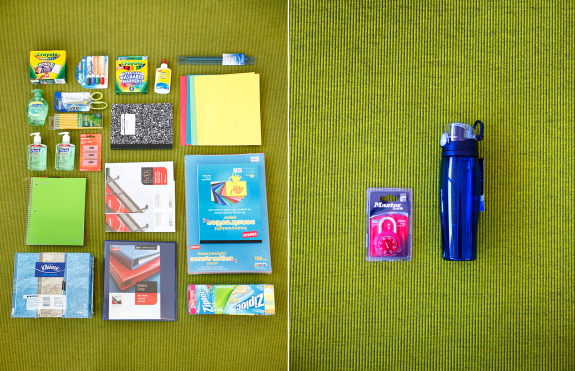 On the left, supplies on the back-to-school list for third graders in Arlington, Texas; on the right, the items fifth graders need in Palmer, Alaska.

Millions of families are heading to Target or Wal-Mart this month to make sure their kids have what they need for the first day of school. And, as many parents know, those glue sticks and gym clothes can really add up.

This August, Americans will spend an estimated $8.6 billion on back-to-school shopping, according to the U.S. Department of Commerce. A lot of that spending is driven by the lists that schools and teachers give out, detailing what students need to bring on that first day.

To get a handle on what’s on those lists and in those backpacks – and how much it costs to fill them — we pulled a sample of schools around the country, one from each of the U.S. Census Bureau’s nine geographic regions. Then, we examined each school’s lists for grades one, three and five.

This isn’t a formal survey, just a snapshot of what parents are expected to provide.

Pencils and notebooks. Paper. Scissors. Cleaning supplies. A quick look reveals not a lot of variation. Kids in Ambler, Penn., or Dover, Ohio, need, basically, the same kinds of things.

Yet, teachers say they put a lot of thought into what they ask students to bring and parents to buy.

“The longer the list, the more unhappy the parents become with major purchases,” says Katherine Els, a fifth-grade teacher at Bethany Community School in Bethany, Conn. “We try to just keep it to a very bare minimum of suggested items.”

For Els’ classroom, she plans out exactly what her students will need, down to the color.

“They need the skills to organize themselves, especially in fifth grade,” she says. “So, it’s time to take our your writing folder, that’s the blue folder, and they pull it right out. It makes things so much easier.”

Other teachers are mindful of how much space their students will need to work.

For daily morning lessons like spelling exercises, the familiar composition notebooks will do, says Meaghan Casey, a fifth-grade teacher at Long Branch Elementary in Arlington, Va.

But for subjects like math and writing, students need the thicker three-subject notebooks, which have a lot more pages. “We have computers, but we like them to have enough room for drafts.”

The math notebook gets used up by the third quarter, she says, “so we have extras, just in case.”

Of course, some of the lists included things like backpacks and sneakers. We omitted those, since many students already have those things. And so that left us with the kinds of supplies you can find at your local office supply store.

Or, the Office Depot website, which is where we went to price out the items.

We tried to bargain shop. Without using coupons, we selected the least-expensive option, except when schools named a specific brand. In that case, we bought that one, even if it wasn’t the cheapest.

Sometimes, the lists and the website didn’t quite match. For example, a list might call for 10 pens, but they’re sold in packs of 12. In those cases we went with the closest number above the minimum.

With those guidelines in mind, let’s look at some prices. As you might guess, we learned almost every parent already knows: School supplies are expensive.

There’s quite a lot of variation on our list, from $14.58 at Butte Elementary School in Palmer, Alaska, to $122 at Atherton Elementary School in Arlington, Texas. But for the most part, the average was around $60. Few families could slide away for less than $50, again not including items like clothing, shoes and backpacks.

If you’re one of the 20 million families in this country with more than one child, your costs can easily hit the triple-digits.

It’s worth noting here that these numbers don’t include many of the other costs and fees that schools these days are placing on parents: sports equipment, art lessons and musical instruments, to name a few. One study from Huntington Bank suggests that all of these fees combined can run, over the course of a school year, to more than $1,000.

Nor did we examine the large sums that teachers themselves often pay – out of their own pockets– for school supplies.

Enough To Last All Year

As we said above, there wasn’t much variation in the kinds of things kids have to bring – the variation comes in the amounts.

“In the lower grades, there are more communal supplies, because they don’t have desks,” says Casey. “They’re all sitting at tables, with a little caddy full of pencils, markers, colored pencils, glue sticks. But when you get into the upper grades, they have a desk that they’re responsible for.”

The other underlying goal, teachers say, is to make these things last throughout the year.

Els’ list, at $42.99, was one of the least expensive on our list, with just 9 different items. The basics, mostly: five notebooks, five two-pocket folders, a dozen No. 2 pencils, etc.

“In today’s economy,” Els says, “teachers really have to think long and hard about the supplies they ask for from parents.”