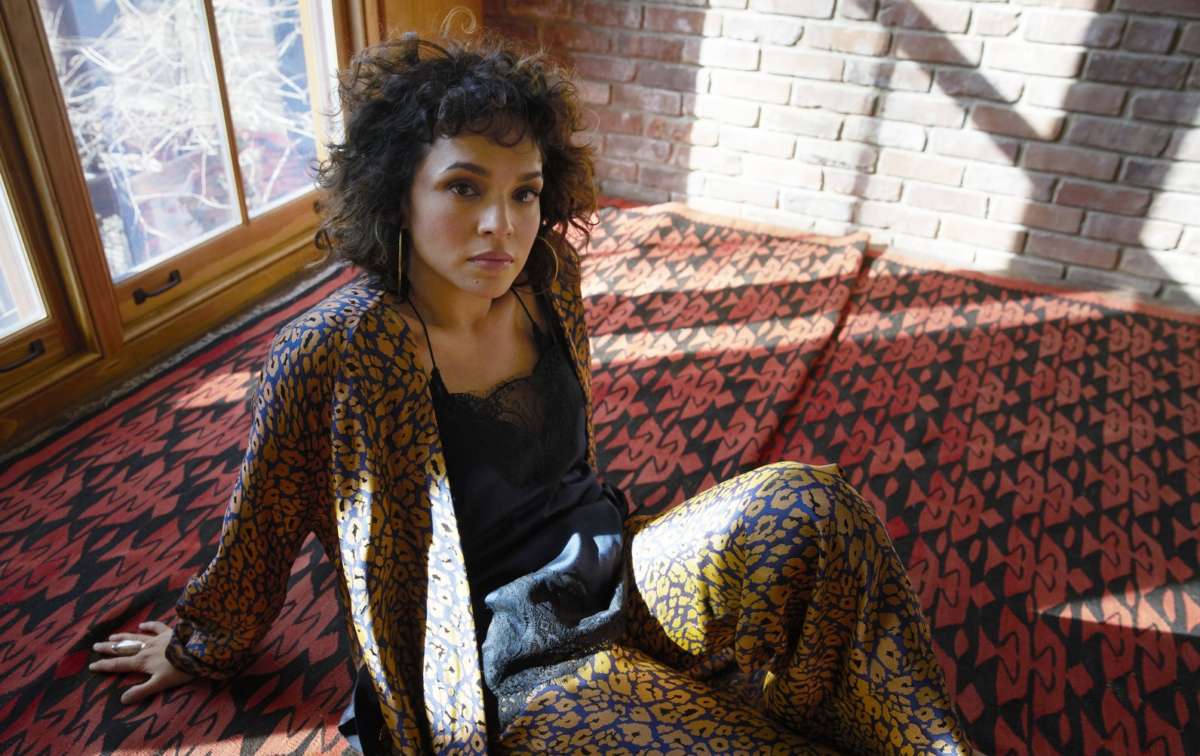 To keep the creative spark alive, Norah Jones says she never stops doing the sort of work that she got into the industry for: gigging, collaborating and learning new things. Diane Russo/Courtesy of the artist

Norah Jones is one of those artists who really needs no introduction. Since her 2002 smash hit debut, Come Away With Me, she’s been consistently making music both on her own and with countless other artists. And she shows no signs of slowing down.

Today, Norah Jones talks about how she’s more creatively inspired now than ever, how collaborations have shaped her as an artist and how she wasn’t even planning to make her new album, Pick Me Up Off The Floor. We also talk about life in self-isolation. This conversation was recorded in late May before the nationwide protests broke out and while COVID-19 was still the top news story.

Raina Douris: You’ve been doing some live streams on your own, and I thought that was really interesting because last time you were on World Cafe, almost exactly a year ago, you were talking about how you didn’t really use social media that much, how you’re not big on stage banter and that direct relationship with your fans can sometimes be tricky to navigate. So now that you’re doing livestreams and the whole performing world has moved online for the time being, how have you adjusted to that new way of interacting?

Norah Jones: I still am not great at using my words; I’d rather sing my feelings, in general. In public, I’m not someone who wants to go on a tirade or rant or write a big opinion piece. That’s just not my personality publicly. But singing songs for people is what I do, it’s what I enjoy, it’s something that I get a good release from. It’s how I express myself, it’s what makes me feel better. So connecting with people in that way has been really, really beautiful for me, especially because I don’t go on social media and express my thoughts that way.

Your new album is your seventh studio album, and it’s one that you’ve said you didn’t exactly set out to make on purpose. So what happened?

I really was excited to do all these collaborations in the last few years, and try to work with people — different engineers, different artists, producers. It was kind of an open door for anything that was inspirational. And I wanted to release singles, because it was a good way to keep it low-commitment and do things fast. As a result, I had a lot of great time in the studio, I released a bunch of singles, but then I had a lot of extra songs from all these sessions. I just really loved them, and I didn’t want to throw them out. It didn’t make sense to release them all as singles, because it was just too much stuff, and it really felt like an album; they related.

When I was listening to a couple of the songs on this album, I was reminded of your 2016 song “Flipside” which was inspired partially by gun violence. Overall, it seems like you have this way of writing political music that doesn’t come across as explicitly political, and you do that on “I’m Alive.” When it comes to writing about topics like that, how do you think about that when you’re sitting down to write a song?

I don’t think about songs as being about gun violence; that’s not how I would have thought about that song, but how people interpret things is fine.

I feel deeply about things often, and I write what I feel, like we all do. We feel things, we watch the news, we see what’s happening, we feel intense about things. I’ve never been the kind of songwriter who sets out to write a song about x,y or z. I came to songwriting a little bit later, right before I made my first album, when I was 20 years old. I finally figured out in the last 10 years or so that I just write what I feel and that’s it. There’s craft to it, and you try to shape things, but the inspiration always comes through you and you don’t force it — I don’t, anyway. A lot of people write differently. That’s not how I write.

So before that was it more challenging to write those things down that were trying to come through you?

I think in the beginning, I tried to self-edit as I was writing, which I realize doesn’t work and it makes you a little crazy. And it’s better to just get it all out. Don’t edit it at all. You don’t ever have to show it to anybody if it’s too personal, you know? It’s fine! Just let it out!

And I’ve got to say, I’ve never not done something because it’s too personal, because by the time you finish the whole process and it kind of morphs into what it morphs into, it takes a little bit of its own journey. For me, anyway, I’ve never felt like something is too revealing, because I know about what drama’s in there and what’s real.

“I’m Alive,” with Jeff and Spencer Tweedy, is one of the many collaborations that you’ve done in your career. What is it about collaboration in general that excites you and inspires you?

It’s kind of like life: If you only get to talk to one person your whole life, then your life would be very different, wouldn’t it? But if you get to have conversations with different people all the time, you’re always learning things. It’s just so fun.

I wanted to talk about some of those musical conversations. Because your 2002 debut, Come Away With Me, was so massive and it’s how you ended up on so many people’s radars for maybe the first time, I bet a lot of people think of you primarily as a jazz artist, but you’ve worked with people all across the musical spectrum who would not fall under that category. You’ve worked with OutKast on the song “Take Off Your Cool,” you’ve worked with Foo Fighters, with Billie Joe Armstrong of Green Day. These are people who are known for having a little bit of an edge to them, but there’s a real softness to the songs that you guys have worked on together. Part of that seems to be the beautiful quality of your voice, but what do you think shapes how those collaborations end up sounding?

Well, the ones you named were ones where I got the phone call to come sing on something, and I’m sure they don’t think of me with a hard rock song. It was a joy to work with people. Sometimes I’ll get a call and I’ll be like “Oh cool! What’s this going to be like?” And then “Oh, of course, it’s a ballad.” It depends. The collaborations I’ve been doing in the last couple years have been more collaborative from start to finish. Doing the album [Little Broken Hearts] with Danger Mouse was one of my highlights; getting to create this whole piece of work with someone who has such a way of working and a different sonic landscape.

That was probably one of my favorite experiences, and it helped shape how I’m doing these collaborations now. Whenever I ask somebody to do a recording with me, my goal is to go in for three days in the studio with them. I come in with a couple of ideas that are very brief, like a melody or maybe one line, just for a starting off point. But the goal is to create something together, and in each instance we have. I think I used to be really — the idea of going into the studio with no songs would freak me out, but now I understand that we’ll come up with something. It doesn’t all have to be genius. But to be honest, so far it’s been really rewarding to work that way, because the spontaneity factor is just so special. Doing all these collaborations the last few years, it’s been like throwing another log on the fire each time. So instead of doing an album and then touring for a year and then waiting another year or two to make another album, I’ve been recording every month or two. And so the fire kind of grew.

The song that opens the album is a very personal sounding song. Can you tell us a little bit about “How I Weep”?

It might have been one of the last songs I actually recorded in this whole process. Early on, I got a stack of poems from a good friend of mine, Emily Fiskio. I was going into the studio and I didn’t know what we were going to do, but I knew I had this great band for three days in the studio, and so I took some of her poems and I adapted them and I wrote songs out of them. And that was really fun, I’ve never really done that before. She gave me some poetry books after that. I got into poetry. I read Dr. Seuss and Shel Silverstein to my kids every night. Then that song kind of happened, and it was a poem and I put music to it. It was funny putting music to my own poem, it wasn’t really much different than putting music to my friend’s poem.

Because the poem already existed and the words already existed on their own. I definitely wrote a lot differently, musically, by doing it that way. Because usually you go towards certain things — certain chord structures, certain melodies — but changing the process so dramatically, you find new things.

While everyone is stuck at home, I know a lot of people are going back to stuff that makes them feel safe and familiar, while some people are searching out new music. What are you going to for comfort?

There’s a song by a band called Cut Worms that popped up on my playlist, it’s called “Song Of The Highest Tower.” It’s my isolation song. It will always remind me of this time, because I’ve just been listening to it a ton. It’s a beautiful song. I think it’s based on a poem by Rimbaud, which is also interesting, after I did a little Googling. The lyrics are beautiful. Everything about it is really beautiful. It’s a very hypnotic song.

It’s been almost 20 years since your debut Come Away With Me, and this is your seventh full-length album, if you’re not counting your zillions of side projects. One might wonder how you keep finding so much inspiration. You’ve even said that you’ve been feeling even more creative lately. How do you keep that creative spark alive? How do you keep it going?

I don’t know how other people do it. I know for me, I just never stop working. And by working, I don’t mean the hard kind of work, I mean the fun kind, the reason I got into music: I do gigs, I play with people and I learn something every time. Every single time I play with somebody, it’s a little jumping off point for another idea.