Noor Salman Trial: Found Not Guilty On All Counts 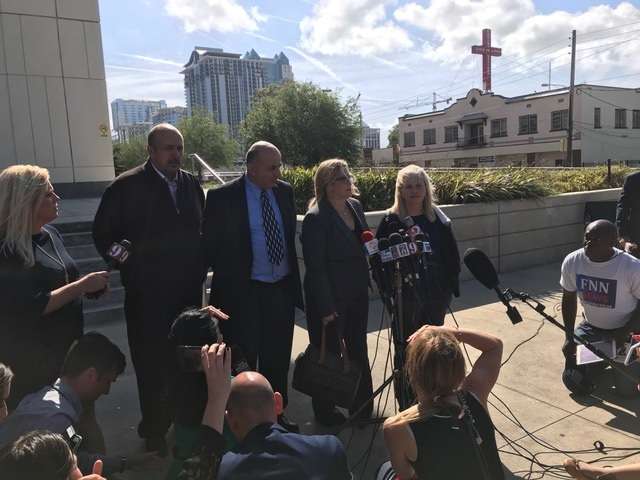 Noor Salman's family thanked the judge and jury outside the federal courthouse after the verdict./Photo: Dylan Lyons

Noor Salman, the widow of the Pulse gunman, was found not guilty on all charges.

Click on the audio above to hear analysis of the verdict.

Salman was charged with providing material support to a terrorist organization and obstruction of justice. Prosecutors say she knew about her husband’s plans for the 2016 mass shooting.

Prosecutors spoke briefly to the media outside the courthouse saying they are disappointed with the verdict but respect the decision.

Salman told FBI agents  that she knew her husband was planning the massacre at Pulse that left 49 dead. Her attorneys contend her statements were coerced and are false.

Orlando Police Chief John Mina released a statement saying he believes in the criminal justice system and thanking the jury for their work.

“Nothing can erase the pain we all feel about the senseless and brutal murders of 49 of our neighbors, friends, family members and loved ones. I want to thank the U.S. Attorney’s Office for the Middle District of Florida and the FBI, who have worked tirelessly on this case in the quest for justice.”

Barbara Poma, owner of the Pulse nightclub, did not answer questions outside the courthouse after the verdict was announced.

Salman’s uncles and aunt say the family is sorry for the family, friends and survivors of the attack. The family thanked the judge and jury. They also thanked the defense attorneys who worked pro bono for Salman.

The family spokeswoman says Noor Salman will go home to California to be with her son.

Uncle Al Salman expressed his gratitude for the judge and jury. He says he doesn’t know how his niece will make up for the last two years away from her son. “I believe in justice,” said Salman, “as long as we protect our justice all of us will be fine.”

In a statement Orlando Mayor Buddy Dyer said he hopes the conclusion of the trial will help the community heal.

“Hopefully the conclusion of the trial related to the Pulse tragedy can help our community continue the healing process. We remain committed to ensure those impacted by this tragedy receive the support they need through the Orlando United Assistance Center by calling 407-500-HOPE.”

“I am disappointed in the outcome of the trail and know the victims and/or their families are more disappointed. This has been an emotional event for our community and many may feel that justice has not prevailed; however the system of justice has spoken and we should look to the continued healing for the families of our entire community so that this event will not define us.”

In a statement Orange County Mayor Teresa Jacobs said she understood that the verdict will be a disappoiontment to some.

“I know that today’s verdict comes as a sharp and painful disappointment to so many in our community, but just as we reacted in those early hours and days after the Pulse tragedy – when we resisted the temptation to respond to hate with hate – I know that today our community will respond in that same manner, providing support to all those who are healing, including the families and loved ones of our 49 Pulse angels, and in particular, our LGBTQ, LatinX and Hispanic communities. I’m confident that we will continue to demonstrate the principles of healing, compassion and peace.”

Salman’s defense attorney Fritz Scheller expressed his admiration for the survivors and families who were in the courtroom during the trial.

Salman thanked her attorneys after the verdict was delivered.

“It was a wonderful result and reaffirms my faith in the jury system, “said Scheller.

Attorney Charles Swift said he was impressed with the jury’s attentiveness and the seriousness that they showed during the trial.

“When we looked at all of the facts, Swift said, “it was clear to everyone.

Salman’s attorneys said they would not discuss when she would be released. They say she will go back to being a mother to her 5-year-old son.

Outside the Pulse nightclub people are standing by the road holding signs that read “We will not let hate win.”

This is a developing story check back for updates.