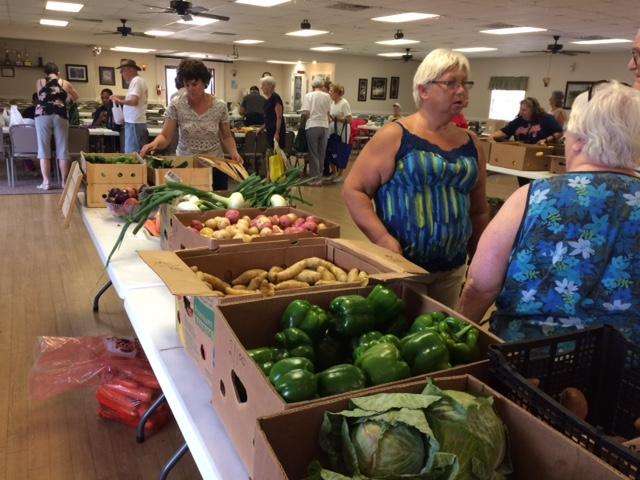 Polk County in Central Florida, is known as an agricultural community. It’s also home to Publix, one of the state’s largest supermarket chains, which is why another distinction may come as a surprise.

A recent study found that the Lakeland-Winter Haven area has one of the highest food insecurity rates in the country. And now nonprofits are stepping in to put food on the table.

On a recent Tuesday, the weekly produce market co-op at the Woodbrook Estates mobile home community in Lakeland was bustling.

Boxes of fresh tomatoes, strawberries, lettuce and other fruit and veggies sat atop rows of tables. Residents at the 55 and over community picked through the produce. They filled plastic bags before heading to the cashier.

Until a year ago, a group called Elderpoint Ministries was giving out tons of free food to thousands of families in Polk County. But director Jane Hammond said it didn’t work.

And the food, she said, wasn’t healthy.

“All this food and at the end of the day we were giving them boxes of high blood pressure and diabetes,” she said. “And so we were persisting in the problem instead of overcoming the problem.”

They found handing out food wasn’t really helping and a recent study backs that up. The Food Research and Action Center found that the Lakeland/Winter Haven metropolitan area had the second highest rate of food insecurity in the nation.

The study is based on a Gallup survey that asked people if there were times in the past year when they did not have enough money to buy the food they needed.

In the Lakeland region, 23 percent of those responding said yes.

The number is far higher than the national rate of 16 percent. Metropolitan areas in Miami and Orlando also had food hardship rates that were among the worst in the nation.

Brad Beatty is the director of Heart for Winter Haven, a faith-based non-profit. He said food insecurity can spawn health problems, including obesity and hypertension. And that’s why giving out healthy food is so important.

“To really do this right, we’re going to have to provide healthy sources of food for people because their quality of life is being impacted by these unhealthy choices,” Beatty said.

Selma White lives at Woodbrooke Estates and says she and her husband are eating healthier because of the market.

“There’s nothing like fresh food,” she said. “Fresh vegetables and fruit, so yeah, we’ve got it made.”

The fruits and vegetables she’s buying aren’t overripe donations. The food is restaurant quality, and much of it is from growers in Polk County. The extremely discounted price she and others pay will cover the cost of buying and delivering the food.

Hammond says this market, and nine others they host, are open to anyone. That takes away the stigma from those who are food insecure. And it also gives them a choice.

“The seniors are more likely to want to participate if they get a say, they see the quality is really fresh,” Hammond said. “So they would rather use their dollar for something they know is good that they want than take free food that they have no control over.”

The market nearly supports itself, said Hammond, because members are involved in selecting, sorting and distributing the food.

Brad Beatty, of Heart for Winter Haven, said the markets are making a bigger impact because those who are at risk become part of the solution.

“When they are not standing in line and they start participating in it, that’s the co-op part of it, communities start forming and they get to know each other because they are working together,” Beatty said.

Communities are important because their members support each other, providing transportation or a meal or even just companionship.

For someone suffering from a food hardship, that can make all the difference, said Beatty.

To search for other solutions to the food insecurity problem, Beatty organized a hunger summit in October.

The summit spawned a group of community and business leaders who meet once a month. They identified several causes of the area’s food insecurity, including high poverty and unemployment rates, a changing economy that has left many in the workforce behind and a lack of social networks among residents.

Beatty hopes to expand on the co-op produce market concept by bringing a low-cost grocery store to Winter Haven. He and others visited a similar store in Orlando that provides a source of healthy food for people who qualify.

But Beatty knows the problem is bigger than a lack of food.

“I think the biggest aha for me and for many people that remarked was that food alone will not solve this problem,” Beatty said.

He and others in the community are no longer thinking about just one solution. And that, he says, is a good start.