NOAA Still Expects This Year’s Hurricane Season to be Active 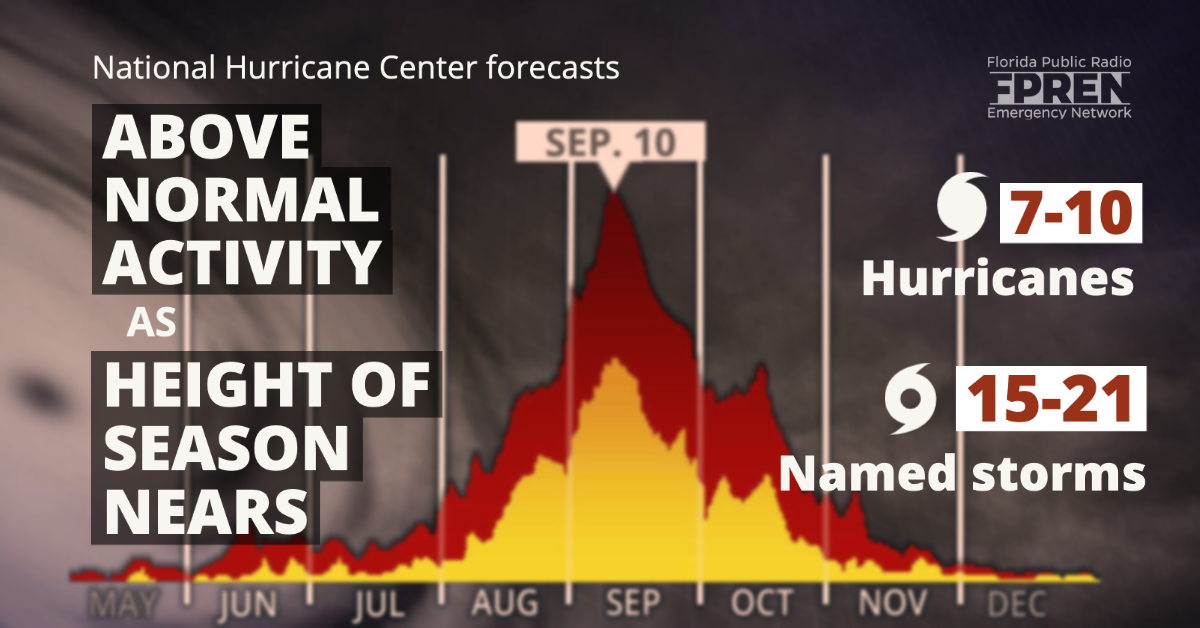 An active season is still the most likely outcome when the 2021 Hurricane Season comes to a close according to NOAA’s updated seasonal forecast.

The parent agency of the National Weather Service and National Hurricane Center says 15 to 21 named storms, 7 to 10 hurricanes, and 3 to 5 major hurricanes are forecast. These numbers include the 5 named storms and 1 hurricane that have already formed in 2021: Ana, Bill, Claudette, Danny, and Elsa.

Ana developed as a subtropical storm on May 22 in the open waters of the Atlantic, northeast of Bermuda. It briefly became a tropical storm on May 23 before it weakened later that day. A non-tropical low formed off the Carolina coast on June 13 before transitioning to a tropical depression and then Tropical Storm Bill on June 15 off the U.S. east coast. Bill transitioned back to a non-tropical low on June 16.

Claudette formed from an area of low pressure in the Gulf of Mexico and made landfall as a tropical storm in Louisiana on June 19. Claudette weakened to a tropical depression while dumping heavy rainfall over the Southeastern United States. It regained tropical storm status as it moved off the North Carolina coast on June 21. Claudette caused damage and injuries in East Brewton, Alabama.

Danny formed from a low pressure along an old cold front on June 28. It made landfall as a tropical storm on Pritchard’s Island, South Carolina (just north of Hilton Head) that evening. It was the first June tropical storm or hurricane to make landfall in the state since 1867.

Elsa was the season’s first hurricane. It formed in an unusual place — in the deep tropical Atlantic — on July 1 as a depression. The storm rapidly intensified into a hurricane near Barbados on July 2 and then weakened to a tropical storm as it moved rapidly across the Caribbean on July 3. After passing Cuba, it moved into the eastern Gulf of Mexico and briefly regained hurricane strength southwest of St. Petersburg, Florida. It made landfall as a tropical storm in Taylor county, Florida on July 7 and moved north across the Carolinas and toward the Mid Atlantic and New England states later that week with strong winds, heavy rain, and tornadoes.

Despite the already busy start to the 2021 season, the historically active part of the season is yet to come. More than two-thirds of the accumulated energy of all tropical storms, hurricanes, and major hurricanes occur between August 15 and October 15 in the Atlantic Basin, including the Gulf of Mexico and the Caribbean Sea. Ocean water temperatures are at their warmest and wind shear is at its lowest during this period: two of the biggest factors that promote hurricane activity.

NOAA’s Climate Prediction Center issued a La Nina Watch earlier this summer in anticipation of potentially cooler than usual water temperatures in the eastern Pacific Ocean. La Ninas have long been known to favor weaker wind shear and therefore more hurricane activity in the Atlantic Ocean. In addition, the west African monsoon is likely to be active and that favors more robust tropical waves moving off the coast that can eventually grow into tropical storms and hurricanes if other favorable conditions are present.

The one factor that is neutral: water temperatures over what forecasters call the “main development region” (or MDR) between the coast of Africa and the Caribbean Sea are near their decades-long average. The Gulf of Mexico is also reporting near-average water temperatures. However, ocean temperatures in the subtropical waters from near the east coast of the United States to the middle of the North Atlantic Ocean are above average and would be more likely to sustain hurricane activity.

It is still nearly impossible to say which part of the coastline, if any, will experience hurricane activity later this season. The science only permits skillful forecasts to be made up to about a week in advance of a landfalling system. There are many new residents in Florida that have moved from other parts of the country into the state, and should familiarize themselves with the many hazards that hurricanes pose. Storm surge is primarily a coastal hazard, but freshwater flooding, tornadoes, and strong winds can extend well inland and cover the entire state.

The Florida Division of Emergency Management website has additional information on evacuation zones, tools needed to make a plan, emergency shelters, and closings and delays at https://www.floridadisaster.org/. The Florida Public Radio Emergency Network distributes the latest storm information via the “Florida Storms” app on the iOS and Android stores, as well as floridastorms.org. Emergency management officials and meteorologists strongly recommend reviewing these tools ahead of time and having a plan well in advance of a storm.