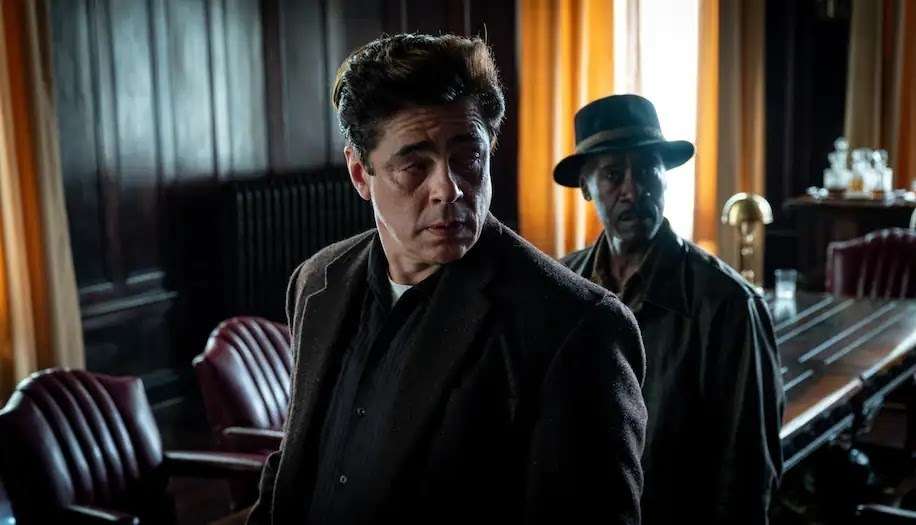 Benicio Del Toro and Don Cheadle play low-level gangsters who get sucked into a into a major corporate conspiracy in No Sudden Move.
Image credit: Claudette Barius

Eight years ago, Steven Soderbergh announced his retirement from feature filmmaking. Happily for us, it turned out to be short-lived. Since 2017 he’s been on a tear, cranking out one or two new movies a year, among them the brilliant NASCAR heist thriller Logan Lucky, the sharp sports-agency drama High Flying Bird and The Laundromat, an irreverent look at financial fraud in the 21st century. What connects these movies is how attuned they are to matters of class and money in a way that’s still pretty rare in Hollywood.

At the center of the story are two crooks: Don Cheadle plays Curt Goynes, and Benicio Del Toro plays Ronald Russo. They’re low-level gangsters who’ve been hired by a Mr. Jones — a nicely menacing turn by Brendan Fraser — as part of a plan to coerce a guy named Mark into stealing a top-secret document from the company where he works.

Curt and Ronald’s job is to “babysit” Mark’s wife and kids at their home while the theft is taking place. But as you might expect from a tense situation with masked men, loaded guns and a terrified family, the scheme quickly goes awry. Amid the fallout, Curt and Ronald realize they’ve been drawn into a major corporate conspiracy.

When the document eventually falls into their possession, they realize they could profit handsomely if they play their cards right — and if they stay alive. It’s a big “if,” as they soon learn there’s a price on their heads. Over the next few days, they run afoul of any number of nasty characters, including a local kingpin played by Bill Duke, and a surly gangster played by an amusingly typecast Ray Liotta. Jon Hamm turns up as a nosy police detective — and looks right at home in the decade before Mad Men.

Through it all, Cheadle and Del Toro, who have both worked with Soderbergh before, maintain a nicely combative rapport, playing two very different men who have grown weary of their lives of crime. While Ronald plans to retire, Curt has nobler intentions: He wants to pour some of the spoils back into the Black communities in Detroit that have suffered heavily under racist housing policies and zoning laws.

Those are just a few of the many social issues the movie touches on, including the tensions between the city’s Black and Italian populations and the disastrous environmental consequences of an unchecked automobile industry. These matters aren’t always woven as smoothly into the story as they could have been, but they give No Sudden Move a potent edge nonetheless. You’re pulled in by the suave camerawork and Hannah Beachler‘s rich mid-century production design, but you’re also made aware of the inequities churning beneath the surface.

That social conscience is nothing new for Soderbergh, who’s made some of his best movies about working-class strivers, from Erin Brockovich to Magic Mike. Here he’s less focused on individuals than an entire corrupt system, showing us how the men in the executive suites are as crooked as the ones shooting each other in the streets. But while No Sudden Move does feature a lot of awful male misbehavior, Soderbergh has always been just as interested in his female characters, and he doesn’t neglect the crucial roles played by the women in this ’50s gangland setting.

Amy Seimetz — a key force on the Soderbergh-produced series The Girlfriend Experience — gives one of the movie’s best performances as Mark’s wife, Mary. Unlike her feckless fool of a husband, she handles a scary situation with unflappable smarts and courage. There are other terrific actors, too, like Lauren LaStrada, Julia Fox and Frankie Shaw: They may be playing housewives or mistresses or secretaries, but they all have an inner strength or defiant streak, a refusal to let the caddish and controlling men in their lives call the shots. I’d gladly follow any of them into movies of their own — especially if Soderbergh is around to direct them.