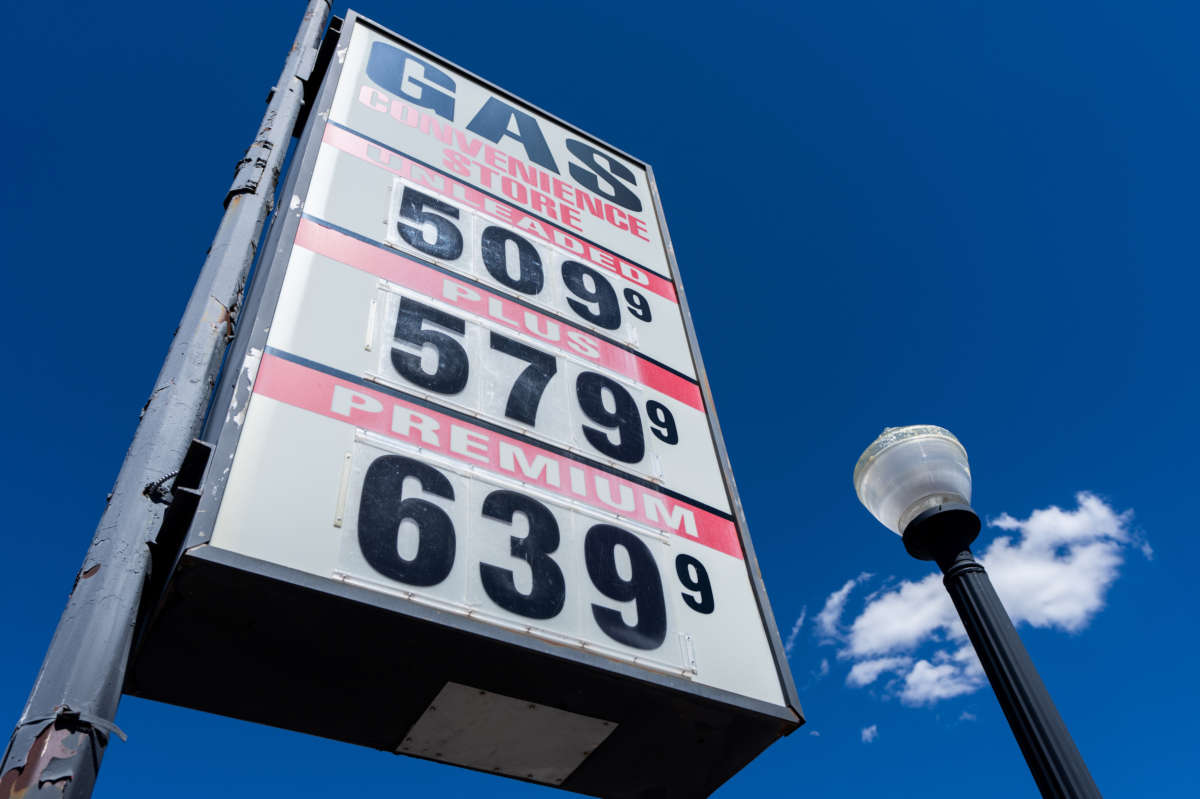 Gas prices are displayed on a sign at a gas station in Williams, Ariz., on Wednesday, July 6, 2022.
Image credit: Bill Clark

Sariah Masterson had big plans this summer for a camping vacation at Natural Bridges National Monument in Utah. But the five-hour road trip seemed like a budget-buster once the price of gasoline hit $5 a gallon last month. Masterson and her family opted for a backyard campout at their home in Provo instead.

“I used that money to buy a couple of extra cots and we camped in the back with our kids,” she says. “The youngest is two. He woke up in the middle of the night and then we all went back inside.”

The high price of gasoline and other goods is interrupting the dreams of a lot of Americans this summer.

On Wednesday, the Labor Department reports on annual inflation for the 12 months ending in June. Analysts say prices likely rose at the fastest pace in more than four decades, eclipsing May’s inflation rate of 8.6%.

Masterson uses an online budget tool, so she’s been acutely aware of rising prices this year. She says the high cost of groceries and other bills has quickly gobbled up the pay raise her husband received from his new job as a technical writer last year.

“With the inflation, that extra money is decreasing,” she says. “I’m glad we have that cushion, but it’s also, jeez, this isn’t as comfortable as at the beginning of the year.”

Average wages in June were 5.1% higher than a year ago. But prices have been climbing even faster, chipping away at workers’ purchasing power.

Bethany Chambliss recently took a new job as a hospital registrar in Lexington, Ky. The 28-mile commute from her home in Frankfort was manageable until the price of gasoline took off this spring.

“At $3.50 a gallon, I can handle it,” Chambliss says. “But when it shot up to almost $5 a gallon, that raise that I received was completely wiped out.”

Chambliss looked at moving closer to work, but found that rents in Lexington were unaffordable. She expects her own rent to jump by 7% when she renews her lease next year.

Gasoline prices have dropped sharply since hitting a record high last month. AAA says the average price for regular gasoline on Tuesday was $4.65 a gallon, down more than 35 cents from the peak price in June.

“Core” inflation, which excludes volatile energy and food prices, is expected to be lower in June than it was in May. But it’s still close to 6% — much higher than people have been used to in recent decades.

Rents have been rising at double-digit rates, with the median monthly cost topping $2000 in May. Shelter costs are one of the biggest factors in the government’s inflation measurement. At the same time, rising mortgage rates have pushed home ownership out of reach for many people.

“I’ve talked about buying a house with my friends and their family,” Chambliss says. “It just seems so unattainable right now.”

The Federal Reserve has begun to raise interest rates aggressively, in an effort to tamp down demand and curb inflation. The Fed’s benchmark rate has increased by 1.5 percentage points since March. Policymakers are expected to boost rates by another 0.75 percentage point later this month.

While prices continue to climb at a rapid rate, many people have managed to stay afloat with the help of additional savings that they socked away during the first two years of the pandemic. Bank balances ballooned when many people were unable to spend money on travel or live entertainment. Those savings were supplemented by government relief payments, tax credits, and additional aid.

While most of that government assistance has now dried up, many people are still sitting on thousands of dollars in extra savings that can help them maintain living standards in the face of higher prices.

“Obviously, they’re paying a lot more to fill their gas tank and buy groceries and pay rent,” says Mark Zandi, chief economist at Moody’s Analytics. “They have less to spend on everything else. But they’re using that savings cushion to keep their spending up.”

That’s important, because consumer spending is the biggest driver of the U.S. economy. Without the extra savings, Zandi warns, shoppers might be forced to cut back, and that could tip the country into a recession.

Zandi thinks price hikes will cool off substantially over the next year. But he acknowledges, he and others have been wrong in the past about how quickly inflation would subside.

“If it does not moderate, lower-income households, they’re going to blow through this extra cash fairly quickly, and by early next year, probably run out,” Zandi says. “That’s when things will really get tricky if we don’t see lower inflation by then.”