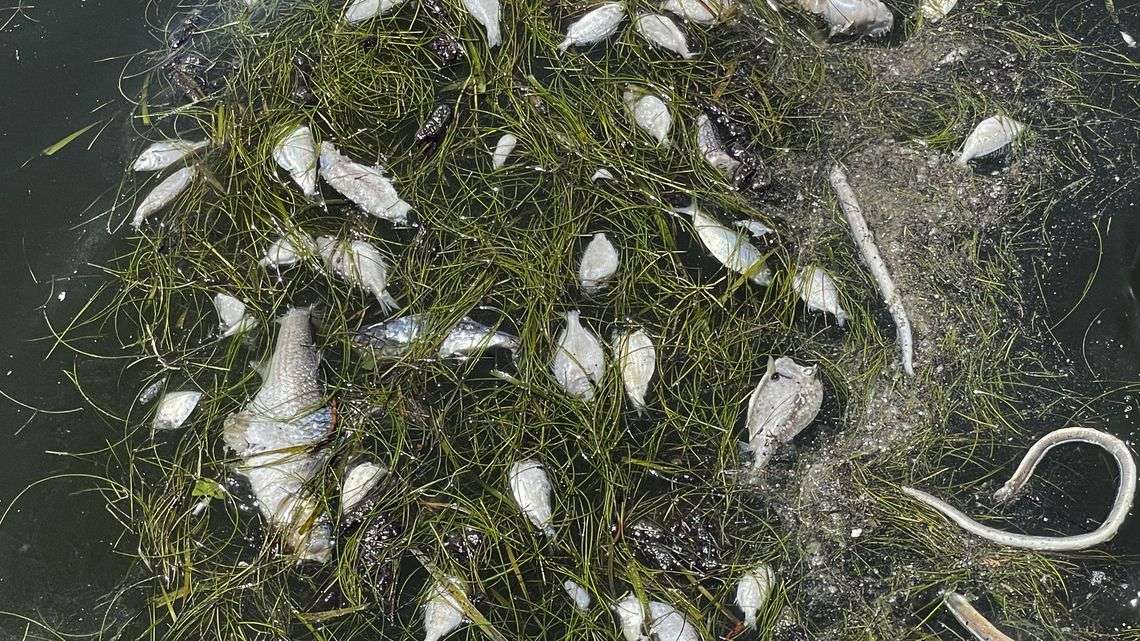 Dead fish are visible in the water at North Shore Park on Friday in St. Petersburg. The Sunshine City has become the epicenter of Tampa Bay's ongoing Red Tide crisis, and no one can say when it will get better. [ DIRK SHADD | Times ]

ST. PETERSBURG — The Sunshine City and its sparkling waterfront parks have become the center of Tampa Bay’s Red Tide crisis.

Rafts of dead fish are washing ashore more quickly than crews can gather the carcasses. Workers have picked up 477 tons of dead marine life from the coastline in recent weeks, according to Mayor Rick Kriseman. That accounts for the overwhelming majority of more than 600 tons picked up across Pinellas County.

Scientists continue to detect high levels of Red Tide through much of the bay, with no sign of immediate relief on the horizon.

“It’s here. It’s bad. And there’s not much we can do other than make sure we’re all communicating well,” Florida Fish and Wildlife Conservation Commission Director Eric Sutton told the Tampa Bay Times. “There’s no signs that necessarily it’s going to be coming to an end soon, but I’ve learned enough not to try to predict Red Tide either.”

Sutton and Florida’s interim environmental secretary, Shawn Hamilton, visited St. Petersburg on Tuesday to hold a discussion about Red Tide. Reporters were not allowed to attend.

“The bay is not very happy right now, to say the least,” said Robert Weisberg, a physical oceanography professor at the University of South Florida, whose lab forecasts the movement of Red Tide. His model, relying on water sampling from the state, suggests the toxic algae will stick around for the foreseeable future.

Weisberg said the bloom could, in fact, linger even longer — perhaps into the fall, which is a more normal season for Red Tide to drift in from offshore.

“The prognosis is not all that good,” he said.

A patchy bloom that revealed itself in early June when small pinfish and grunt turned up dead on Pinellas’ beaches has since sunk unnervingly into one of Florida’s — and the country’s — most treasured estuaries. Pinellas has reported some water samples in Tampa Bay with levels of Ride Tide 10 to 17 times greater than the concentration considered “high.”

Snook and tarpon have floated dead in the bay. Carcasses decayed Tuesday in the sun, gray and reeking, at Maximo Park near the Sunshine Skyway bridge and Bay Vista Park across Pinellas Point. They piled like snowdrifts beside upturned shells of horseshoe crabs at Lassing Park in the Old Southeast.

Red Tide more typically shows up in the Gulf of Mexico, she said, like it did during a prolonged bloom in 2018. To see high levels in the bay is “really, really, really uncommon.”

“Unfortunately, I think it could be pretty uncomfortable for a long time,” Burke said.

A bloom was drifting far south of Tampa Bay earlier this year, Weisberg said, around Charlotte Harbor. Unusually persistent southerly winds between March and April may have moved those organisms up to Tampa Bay, he said. Once here, the Red Tide organisms likely met with recycled nutrients, particularly nitrogen, dumped into Tampa Bay in April through contaminated water from the old Piney Point fertilizer plant site in Manatee County, according to Weisberg.

“If you give it the right suite of nutrients, the concentrations can escalate very rapidly,” he said.

Scientists have not proven definitively that the bloom is feasting upon contamination from Piney Point, and Burke said they may never land a “smoking gun.” But they know that putting nutrients into the bay generally causes algae to grow.

“That’s textbook what we’re seeing right now,” Burke said. “We have no reason not to link those two things together.”

The forces that end a Red Tide bloom are still a “mystery,” according to Weisberg, but he said the standard circulation of the bay is not likely to flush out algae soon. Dead fish compound the problem because the carcasses release more nutrients back into the water to feed Red Tide. Burke said that is part of why local efforts to remove dead fish from the water are so important.

The city stationed dumpsters in several parks so residents can throw away any dead, stinking fish they collect from canals and at the foot of seawalls.

Lori Johnson walked her Lhasa Apso, Griffin, on a sidewalk by one bin in Flora Wylie Park. She had smelled rotting fish from her ninth-floor condo the night before and on her daily walks watched as fish floated north from Vinoy Park to Snell Isle. Workers clad in highlighter yellow scooped dead animals from the water.

“They were from 22nd to 28th, just lined up with trucks and men, just digging it out,” Johnson said.

Rows of dead fish are visible in the water at North Shore Park in front of the St. Pete Pier on Friday. ( DIRK SHADD | Times )

A crew near Snell Isle Boulevard that morning loaded dead fish into garbage bags, hauling the load away in city pickups.

Two environmental groups, Captains for Clean Water and Tampa Bay Waterkeeper, hosted a listening session later Tuesday at a brewery in South Tampa to hear from fishing guides about the problem. It was one of three meetings they planned that day.

Daniel Andrews, co-founder of Captains for Clean Water, told the Times that he has heard from charter operators logging cancellations because of Red Tide. He shared a story of captains bringing clients north to Crystal River for clear fishing. The state’s most recent monitoring shows high levels of Red Tide to the south of Tampa Bay as well, off Longboat Key and Sarasota.

Andrews, from Fort Myers, said his area suffered the brunt of the last bad Red Tide from 2017 to 2019. Fishermen there still cannot keep redfish and snook because of a partial closure following the bloom. State regulators reopened those same fisheries while in season in Tampa Bay only this spring, because it was not hit as hard. During the 2017-19 crisis, Pinellas removed more than 1,800 tons of dead marine life.

Captains and guides, Andrews said, are some of the first people hurt when visitors delay trips because of Red Tide. They also suffer long-term if toxic algae kill off mature keeper fish, depleting overall stocks.

“It’s not something that goes away as soon as the Red Tide does,” he said.