Nightly concerts resume in The Villages, with limited crowds and some wearing masks 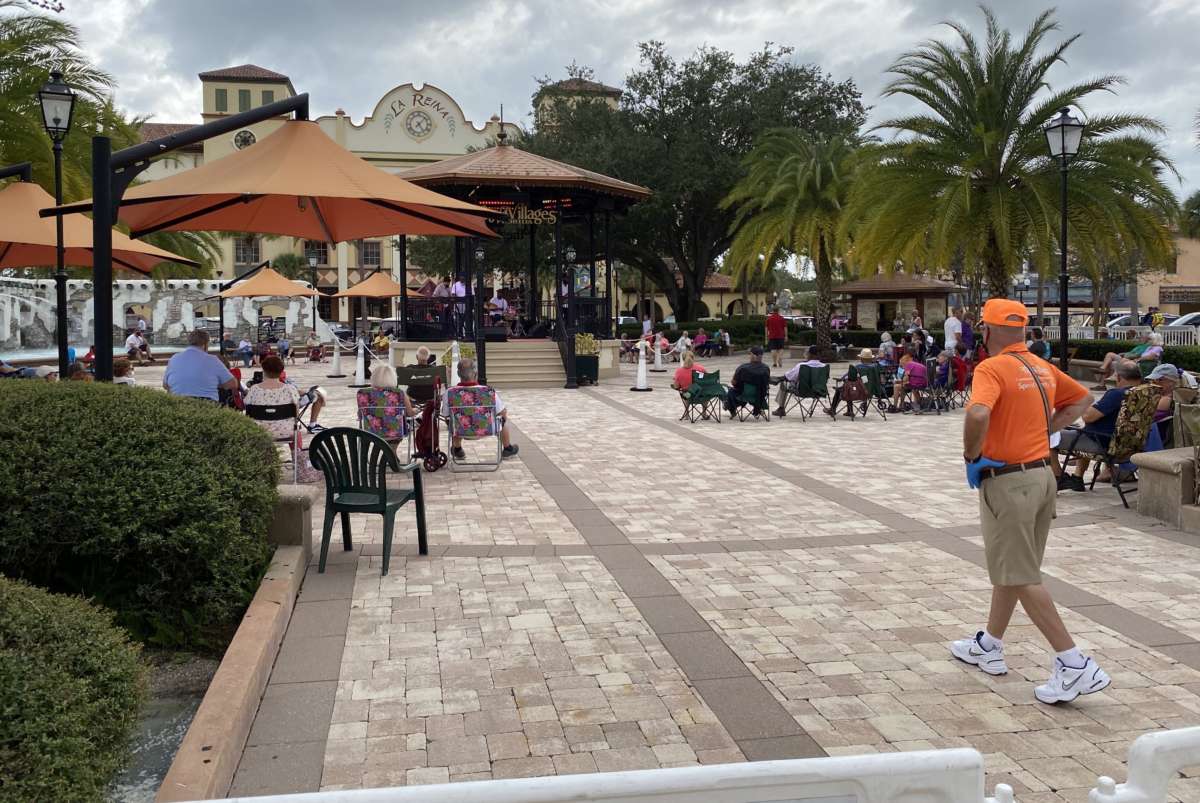 Limited crowds allowed for social distancing during the opening night of concerts on Spanish Springs Town Square in The Villages. Photo: Joe Byrnes

Live music has resumed on the Spanish Springs Town Square. The nightly concerts had been canceled in March because of COVID-19.

But Monday night they returned at all three town squares in The Villages.

Some visitors had gone online to get the free tickets. Some just watched from beyond the barricades, which were there to limit the crowd.

They were curious to see if this key feature of their social life could return safely during the pandemic.

Fresh from the golf course, Barbara Yencho looked over the square. She had missed these concerts.

“When we didn’t have the squares open,” she said, “it was like a void that you felt. Come five o’clock and you’re saying, “Uh oh, what are we gonna do?”

Yencho had not requested a ticket because she was afraid it would be crowded.

But it looked OK, she said. “I think I do feel safe to do this. There’s not a lot of people. Although, I think there should be more masks.”

The Villages has limited the attendance, and even though all the tickets have been given out for the whole week, there was plenty of room for social distancing on the square.

People had to bring their own folding chairs. And they were lined up in short rows. Several couples were dancing as Trip 19 played its mellow jazz from inside the gazebo.

Dorothy Thomas said she likes, as she puts it, “the jam.”

“And I enjoy it. I love people. And I like to see people enjoy themselves.”

Thomas, who is one hundred years old, was seated with her family listening as the show started. Like many, they were in one of the parking spaces around the square.

Along the barricade, Bubba and Kate Aiello were dancing together. It had been a long time.

“We’ve missed it.,” he said. “We really, really have missed it. We haven’t danced formally since it closed down. We dance at home, when we’re able to.”

Bubba, who is 85, said they were disappointed to see many people not wearing masks.

“They don’t seem to be impervious to the threat,” he said. “We’re very much so. And we’re not taking any chances. This is our lives.”

Jim Penny — sporting a Trump hat — listened from a golf cart with his wife. They used to come to the concerts all the time.

Penny did not think much of the coronavirus precautions.

“My idea of all this fencing up here to stop COVID-19. I think that is a bunch of crap,” he said.

Even though Dolly Pelny and her friends all had tickets, they were outside, watching from their folding chairs.

Coming to the square has been a big part of their social lives for years and she pointed out the spots where her group would sit.

“Even though the square didn’t have concerts,” Pelny said, “we sat on the square under those umbrellas. Probably some nights we had 10, and we were all six and seven feet apart.”

She is going to miss those conversations.

“Without the music we learned more about each other and things that we liked and we didn’t like and where you were from. ”

A Villager named Tom, who did not want to give his last name, said the retirement community is known from its activities 365 days a year … but he understood why they had to cancel things.

“And I think as long as people are responsible, there won’t be any issues,” he added. “But responsible people sometimes are hard to find.”

Yencho — who belongs to a singles club — says she already has a list of all the shows coming this month.

“So I’ll look at that and see what group that I want to see and I’ll be down here.”