Night Of Calm In Ferguson Follows Days Of Unrest 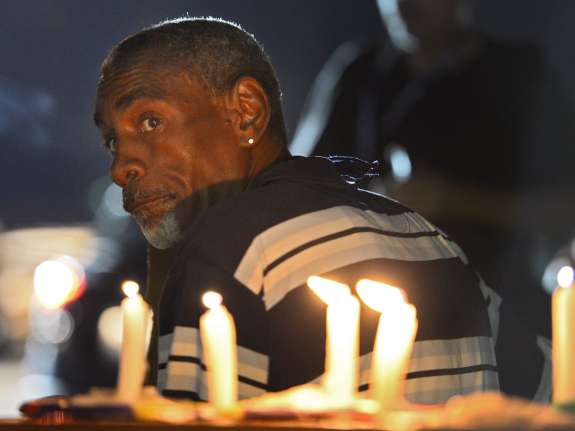 A demonstrator protests the shooting death of Michael Brown in Ferguson, Mo., on Wednesday night. It was a night of relative calm after days of unrest.
Image credit: Larry W. Smith

Following violent protests, Ferguson experienced a night of relative calm after a grand jury began investigating whether criminal charges should be brought against the white police officer who fatally shot an unarmed black teen and a visit to the St. Louis suburb by Attorney General Eric Holder.

“As demonstrators made laps up and down the road (remaining in motion in accordance with law enforcement’s rule), most of the policing was self-policing.

” ‘Y’all have nice gas masks, that’s cool,’ one demonstrator said to a stationary journalist. ‘We don’t, so please keep moving.’ ”

Holder met with dozens of leaders at a community college on Wednesday in hopes his visit would calm the troubled community, which erupted into anger and violence following the Aug. 9 fatal shooting of teen Michael Brown by police officer Darren Wilson, reports NPR’s Carrie Johnson.

Holder told college students about his personal experience with being racially profiled and asked them to start a conversation about how the justice system can change.

“I remember how humiliating that was and how angry I was and the impact it had on me,” Holder said at a gathering of dozens of community leaders at the St. Louis Community College.

Holder also met with Missouri Highway Patrol Capt. Ron Johnson, thanking him for taking control of a tough situation and telling him to get some rest.

Johnson, asked if he had confidence in the local investigation, said Holder’s presence “is a guarantee on that.”