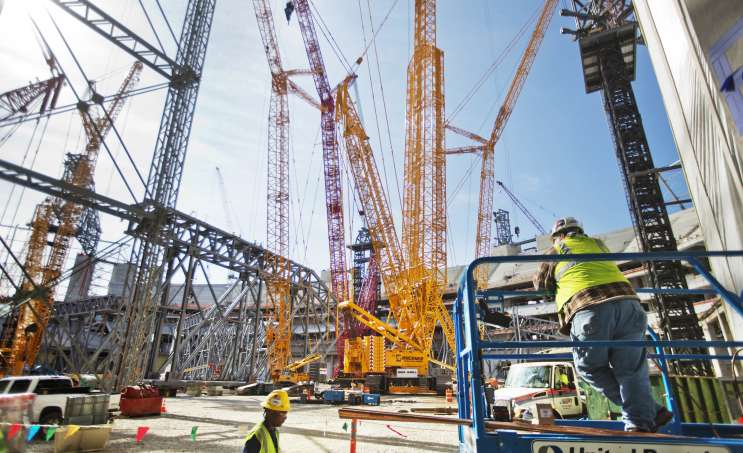 The Atlanta Falcons' new stadium, seen here on May 16, is currently under construction. The project helped Atlanta win the bid for the 2019 Super Bowl.
Image credit: David Goldman

The NFL announced three new sites for upcoming Super Bowls on Tuesday. Atlanta will get Super Bowl LIII in 2019, South Florida will host the following year and Los Angeles will have 2021.

The league had previously announced that the championship game would be held in Houston next year and in Minneapolis in 2018.

Atlanta will be hosting its third Super Bowl ever, and its first since 2000, The Atlanta Journal-Constitution reports. The paper adds:

“The vote capped a year-long effort by the Falcons and Atlanta’s bid committee to secure the game for the $1.4 billion retractable-roof stadium under construction next to the Georgia Dome.

“The bid, titled ‘Atlanta Transformed,’ emphasized the new stadium and its close proximity to other downtown attractions that were not in place when the Super Bowl was last played at the Georgia Dome.”

Earlier this year, the NFL had warned that the city could jeopardize its bid over Georgia legislation that restricted rights of LGBT people. Under pressure from the league and Atlanta businesses, the governor vetoed the bill in March, as The Two-Way reported.

The last time Los Angeles hosted the Super Bowl was 1993, The Los Angeles Times reports; the city’s new stadium is expected to open in 2019.

“There have been seven Super Bowls in the L.A. area, including the first,” the Times says, “but the city was taken out of the rotation when the Rams and Raiders left after the 1994 season.” (The NFL approved the Rams’ move back to Los Angeles in January.)

The South Florida Sun-Sentinel notes that the bidding process has become more competitive in recent years “due to the economic windfall that it brings. The league has been favoring cities with new or significantly renovated stadiums.

The stadium in South Florida is undergoing a $450 million renovation by Dolphins owner Stephen Ross.