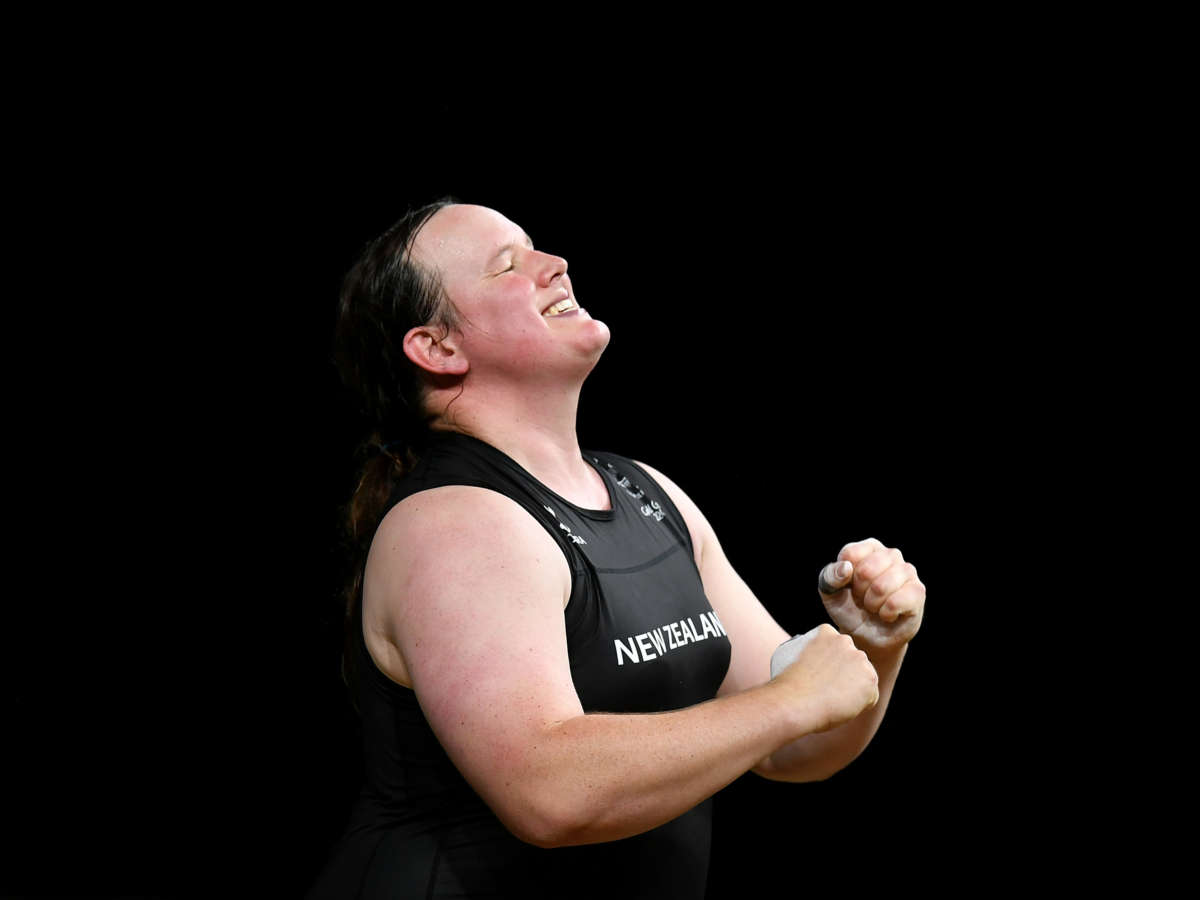 New Zealand weightlifter Laurel Hubbard celebrates completing a lift at the 2018 Commonwealth Games in Australia. Hubbard has been named to New Zealand's team at the Tokyo Olympics, making her the first openly transgender competitor at the Olympics.
Image credit: Dan Mullan

New Zealand has named Laurel Hubbard to its women’s weightlifting roster for the upcoming Olympics in Tokyo, making her the first openly transgender athlete to compete in the games.

“I am grateful and humbled by the kindness and support that has been given to me by so many New Zealanders,” Hubbard said in a statement on Monday. “When I broke my arm at the Commonwealth Games three years ago, I was advised that my sporting career had likely reached its end. But your support, your encouragement, and your aroha [love] carried me through the darkness.”

But her selection is not without controversy. Some argue that because Hubbard went through male puberty, she will have an unfair advantage over her competitors.

Hubbard has satisfied the IOC’s requirements for trans women

Hubbard has met the International Olympic Committee’s requirements for athletes who transition from male to female. The requirements stipulate that the athlete must declare that her gender identity is female and can’t change that status for sports purposes for at least four years. The athlete’s testosterone level must stay below 10 nanomoles per liter.

Those who transition from female to male are eligible to compete in the male category without restriction.

Hubbard transitioned to female eight years ago at age 35. Before her transition, Hubbard competed in men’s events, setting national records in junior competition, according to The Associated Press.

Hubbard’s inclusion will be a vital signal for trans youth, says Schuyler Bailar, a trans man who competed in Division I men’s swimming for four years at Harvard University.

Some argue Hubbard will have an unfair advantage

A recent study published in the British Journal of Sports Medicine found that even after a year of hormone therapy, trans women on average had an advantage over cisgender, or nontransgender, women.

Anna Vanbellinghen, a Belgian weightlifter who is likely to compete against Hubbard, said in May that Hubbard’s presence in the competition would not be fair.

“First off, I would like to stress that I fully support the transgender community and that what I’m about to say doesn’t come from a place of rejection of this athlete’s identity,” Vanbellinghen told Olympics news site Inside the Games.

“I am aware that defining a legal frame for transgender participation in sports is very difficult since there is an infinite variety of situations and that reaching an entirely satisfactory solution, from either side of the debate, is probably impossible.

“However, anyone that has trained weightlifting at a high level knows this to be true in their bones: This particular situation is unfair to the sport and to the athletes.”

“As well as being among the world’s best for her event, Laurel has met the IWF eligibility criteria including those based on IOC Consensus Statement guidelines for transgender athletes. We acknowledge that gender identity in sport is a highly sensitive and complex issue requiring a balance between human rights and fairness on the field of play,” Smith said in a statement.

Athletes bring a range of biological differences to competition

Chelsea Wolfe, a freestyle BMX rider, is an alternate for the U.S. women’s squad. If one of the two riders ahead of her dropped out, she would be the first openly trans member of Team USA. The website Outsports reported last month that there were at least nine trans or nonbinary athletes vying for spots on Olympic and Paralympic teams.

Bailar, the former Harvard swimmer, notes that the debate over trans women in sports often centers on questions of fairness and biological advantages.

“Here’s the thing: Sports are based on biological differences,” he says. “When we have athletes like Michael Phelps, who is tall — he’s built for swimming. He has half the levels of lactic acid the average athlete produces, and nobody calls that unfair.”

“When women have biological differences, they are called unfair as opposed to when men do, they are just called superior athletes,” Bailar says. “The reality is that cis women even exhibit plenty of differences within sports. And that’s not unfair. That’s just differences in bodies.”

In a 2017 interview with New Zealand news site Stuff, Hubbard noted that she competes under rules established by the International Olympic Committee in 2003 to allow transgender athletes to compete.

“This isn’t a new thing. Perhaps the fact that it has taken so long for someone like myself to come through indicates that perhaps some of the problems that people are suggesting aren’t perhaps what they might seem,” Hubbard said.