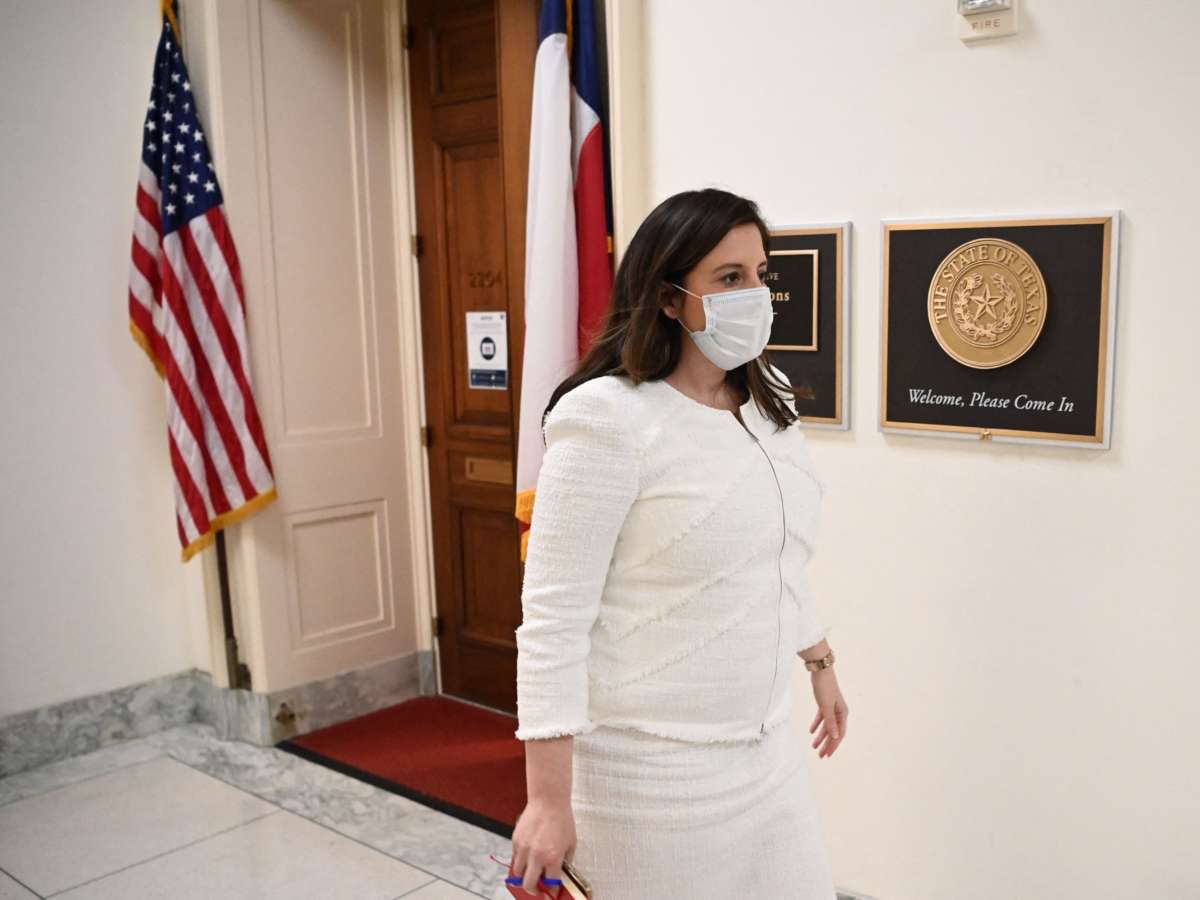 GOP lawmakers have chosen New York Rep. Elise Stefanik as the No. 3 Republican in the House, anointing a Trump loyalist to a leadership position charged with delivering party messaging.

Her election was announced in a tweet by House GOP Leader Kevin McCarthy.

In a statement posted to Twitter, Stefanik said she was “honored and humbled to earn the support of my colleagues.” Speaking to reporters later, she thanked former President Donald Trump whom she called “a critical part of our Republican team.”

“I believe that voters determine the leader of the Republican Party and President Trump is the leader that they look to,” she said when asked of Trump’s leadership role within the party.

Stefanik’s name was quickly floated as a replacement for Cheney, who had successfully warded off an attempt on her leadership position in February. Stefanik garnered the public support of House Minority Leader Kevin McCarthy, House Minority Whip Steve Scalise and Trump himself.

While she appeared in some ways to be a foregone conclusion as the new conference chair, Stefanik did face some opposition from conservatives like Rep. Chip Roy of Texas, who sent a memo to colleagues earlier this week criticizing her record as being too moderate.

Roy maintained the conference shouldn’t “rush this process just for the sake of doing it,” and told Capitol Hill reporters Thursday evening that he would run for the position himself.

In Friday’s press conference, McCarthy thanked Roy, saying “We had a healthy debate and a good election.”

Stefanik sent a letter to colleagues Tuesday detailing her vision to “unify” the conference.

“I strongly believe that one of the most important qualities in any leader is the commitment and ability to listen,” she wrote. “This week, I have had hundreds of productive and informative conversations with Members from all corners of our Conference. Today, I humbly ask to earn your vote for House Republican Conference Chair to unify our message as a team and win the Majority in 2022.”

Stefanik entered Congress in 2015, representing an upstate New York district that voted twice for former President Barack Obama. She amassed a moderate voting record and earned a reputation as one of the more bipartisan members on Capitol Hill.

But as her district shifted hard in favor of Trump, so did Stefanik.

She became a star of the MAGA-verse following her passionate defense of the former president during his first impeachment hearings, with her performance earning her personal praise from Trump and record-breaking fundraising for her re-election.

Stefanik replaces Cheney, a woman she previously called a “huge asset in the role” and whom she twice nominated for the leadership position she now assumes.

Cheney is arguably more conservative than Stefanik, who voted against Trump’s 2017 tax cuts. But the pair diverged most notably on Trump and his role in the GOP. Cheney voted for Trump’s impeachment earlier this year following the insurrection on the U.S. Capitol. Stefanik did not.

Cheney voted to certify the electoral results from the 2020 presidential election. Stefanik joined 138 House Republicans in voting to object to the counts in Pennsylvania.

Stefanik has also made her embrace of Trump abundantly clear, which aligns with party leaders like McCarthy who are relying on the former president’s support in the next election cycle to boost Republicans’ numbers in Congress.

But even after her ousting, Cheney remains firm in her stance.

“I will do everything I can to ensure that the former president never again gets anywhere near the Oval Office,” she told reporters following her removal from leadership.