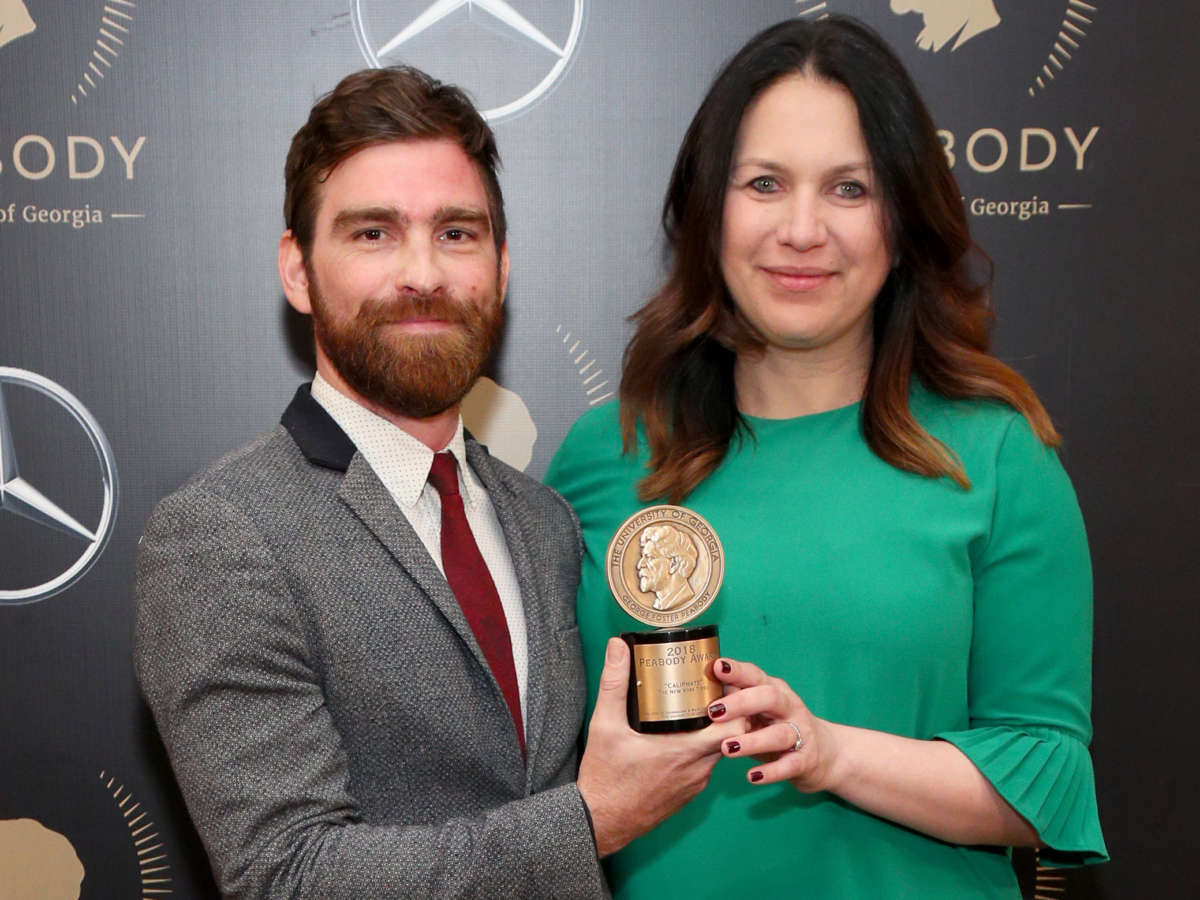 Rukmini Callimachi and colleague Andy Mills pose with their Peabody Award for 'Caliphate' at the 78th Annual Peabody Awards Ceremony in May 2019.
Image credit: Astrid Stawiarz

The New York Times has retracted the core of its hit 2018 podcast series Caliphate after an internal review found the paper failed to heed red flags indicating that the man it relied upon for its narrative about the allure of terrorism could not be trusted to tell the truth.

The newspaper has reassigned its star terrorism reporter, Rukmini Callimachi, who hosted the series.

Caliphate relayed the tale about the radicalization of a young Canadian who went to Syria, joined the Islamic State and became an executioner for the extremist group before escaping its hold.

Canadian authorities this fall accused the man, Shehroze Chaudhry, of lying about those activities. He currently faces criminal charges in a federal court in Ontario of perpetrating a terrorism hoax.

“We fell in love with the fact that we had gotten a member of ISIS who would describe his life in the caliphate and would describe his crimes,” New York Times executive editor Dean Baquet tells NPR in an interview on Thursday. “I think we were so in love with it that when when we saw evidence that maybe he was a fabulist, when we saw evidence that he was making some of it up, we didn’t listen hard enough.”

The highly produced series was announced to much fanfare in March 2018 at the South By Southwest Conference in Austin, Texas, as a worthy successor to the paper’s hit news podcast, The Daily.

“‘Caliphate’ represents the modern New York Times,” Sam Dolnick, an assistant managing editor, said in unveiling the project. “It’s ambitious, rigorous, hard-nosed reporting combined with first-rate digital storytelling. We’re taking our audience to dangerous places they have never been, and we’re doing it with more transparency than we ever have before.”

Caliphate made a huge splash for The Times, winning awards, acclaim, new listeners for its podcasts and new paying subscribers. And it further propelled Callimachi into the journalistic stratosphere. In vivid and visceral detail, Chaudhry, speaking under the pseudonym Abu Huzayfah, told Callimachi and her colleagues of the atrocities he witnessed in Syria and of his involvement in execution-style killings.

It was a coup for the newspaper and its reporter focusing on terrorism, a notoriously difficult subject to cover. “He gave us a gift with the story,” Callimachi told the Canadian Broadcasting Corp. in May 2018 as Caliphate episodes were being released. “It’s an eye-opening account of his passage through the Islamic State.”

On multiple occasions prior to the release of the podcast, Chaudhry had told Canadian news outlets that he had traveled to Syria in 2014 and joined ISIS. But he had denied playing any role in killings.

To Callimachi and the Times, however, he claimed he had conducted executions.

After Caliphate posted the episode in which Chaudhry described killing two civilians, an uproar ensued in Canada. On the floor of Parliament in Ottawa, a leading opposition lawmaker, Candice Bergen, challenged Prime Minister Justin Trudeau’s efforts to reintegrate former terrorists into society.

“This guy is apparently in Toronto,” Bergen said, referring to Chaudhry. “Canadians deserve more answers from their government. Why is it not doing something about this despicable animal walking around the country?”

Chaudhry came forward and once again denied he had participated in any killings — that is, he denied what he had said, in his own words, on tape, to Callimachi and The New York Times. Even so, in 2019 the podcast series was a finalist for the Pulitzer Prize and won a Peabody, one of the highest distinctions in broadcast journalism.

The Canadian media and a handful of critics in the U.S., notably Erik Wemple of The Washington Post and Hassan Hassan of Newlines magazine, raised significant questions about Callimachi’s judgment and the accuracy of her reporting.

The Times resisted revisiting Chaudhry’s story until his arrest this fall, when Canadian officials charged him with lying about participating in terrorist activities. It then published the findings into Chaudhry’s activities by its distinguished national security reporter, Mark Mazzetti, who cast significant doubt on the Canadian’s claims.

“They came back and said, ‘If you look at the guy’s story, there is not enough powerful evidence that he was who he claimed to be for us to justify that story,” Baquet says.

In the interview with NPR lasting nearly an hour, Baquet says the Times did not have evidence Chaudhry had ever been to Syria. Nor could it show he had joined ISIS, much less kill civilians for the group. The man’s account proved to be riddled with holes and contradictions. Even when confronting some of them, the reporting and producing team sought ways to show his story could still turn out to be true.

“I thought we produced another, you know, ‘Holy damn!’ story,” Baquet recalled. “I was really proud of it. Another big story to embrace and applaud.”

Callimachi, a noted terrorism correspondent, has won some of the most distinguished honors in foreign reporting and is a four-time finalist for the Pulitzer Prize. She joined The Times in 2014 after spending seven years covering Africa for The Associated Press.

Baquet says editors relied on Callimachi’s judgment to guide their own when it came to Caliphate.

“She’s a powerful reporter who we imbued with a great deal of power and authority,” he says. “She was regarded at that moment as, you know, as big a deal ISIS reporter as there was in the world. And there’s no question that that was one of the driving forces of the story.”

Baquet notes that Callimachi had broken many stories and says that Murphy had found there had been no dishonesty or attempt by the Caliphate team to deceive editors or readers.

As of Friday, Baquet is posting an “Editor’s Note” atop each element of Caliphate saying the series should never have been produced with Chaudhry as a central character. The Times also writes that the series did not meet its standards for accuracy or fact-checking.

Baquet also acknowledges that Murphy’s review will yield additional corrections of Callimachi’s past work. However, he says nothing rose to the level of the mistakes in judgment made in Caliphate.

When questions were first raised about the podcast, Callimachi dismissed criticism of the validity of her series by saying only her team had been able to get the truth from him.

“We were able to get to him both before any other media had gotten to him, but crucially, before law enforcement had gotten to him,” she told the CBC in May 2018, the day after the release of Chapter 5, in which Chaudhry described stabbing a man in the heart repeatedly. “He would speak to us in this window of time when he essentially thought that he had slipped through the cracks.”

This fall, as Canadian authorities were wrapping up an investigation on Chaudhry, Callimachi similarly championed her series. On Twitter, she raised questions about the competence of Canadian intelligence officials in the Chaudhry case. The Times defended her piece to The Washington Post and others, saying the reporting proved to be true and that doubts about Chaudhry’s account were central to the podcast’s narrative.

Those doubts were acknowledged at the outset and surfaced most fundamentally in the sixth installment, in which Callimachi and her team confronted fundamental problems in Chaudhry’s timeline of his activities.

At the heart of the episode was an effort to figure out how the pieces of his story might fit together — if the Times was willing to shift the dates involved. One audio editor described that scenario as “Occam’s razor,” suggesting that it was the simplest resolution to their dilemma and therefore probably the right one.

Callimachi also relied on corroboration from her colleagues Eric Schmitt, Adam Goldman and others that U.S. and Canadian intelligence officials harbored a suspicion — in some cases even a belief — that Chaudhry might have joined ISIS. But it wasn’t clear if those officials relied on hard evidence to verify Chaudhry’s story or his own past claims on social media.

In posting real-time analyses on social media about unfolding terrorism attacks, Callimachi has helped to cement her reputation as a leading source on terrorism. Indeed she has frequently appeared on NPR and other networks as an analyst. Colleagues consider her a fearless force of nature, chasing stories, sources and documents in far-flung places.

However, she also has detractors, even within her own newsroom. Some editors and reporters on the Times’ foreign desk kept their distance, according to colleagues who spoke on condition they not be named due to the sensitivity of the topic. In one case, a scoop required a subsequent “Editor’s Note” and a full follow-up story to address doubts about the veracity of the documents she relied upon. In another, the Times disclosed it had bought video footage that included terrorist propaganda.

Yet Baquet and Managing Editor Joseph Kahn, a former top international editor, stood behind her. Dolnick, a scion of the Sulzberger family which has a controlling stake in the New York Times Co., personally encouraged her role and took on oversight of the Caliphate project. As Callimachi served as the heroic figure of Caliphate, on a quest for truth, audio producer Andrew Mills, who helped to develop The Daily, emerged as a recurring character as well.

Baquet declines to say whether other Times journalists would receive reprimands or be reassigned as a result of the internal review.

He says he would work with Callimachi to determine a fresh assignment, praising her recent investigation on the police shooting of Breonna Taylor in Louisville, Ky.

“I do not see how Rukmini could go back to covering terrorism after one of the highest profile stories of terrorism is getting knocked down in this way,” Baquet says.

He says he will inform the judges of the Peabody Awards and others who bestowed recognition on Caliphate that the series was compromised. And Baquet points to media columnist Ben Smith’s October look at the controversy as part of what he says is a push for transparency.

“The New York Times has done tremendously ambitious journalism over the last few years. All of it has held up to the greater scrutiny,” Baquet says.

“When we get it wrong, I want people to understand we’re going to talk about it,” he continues. “And what I’m hoping is that by talking about it, people will understand that we want to win their trust. And we want them to believe what we report.”