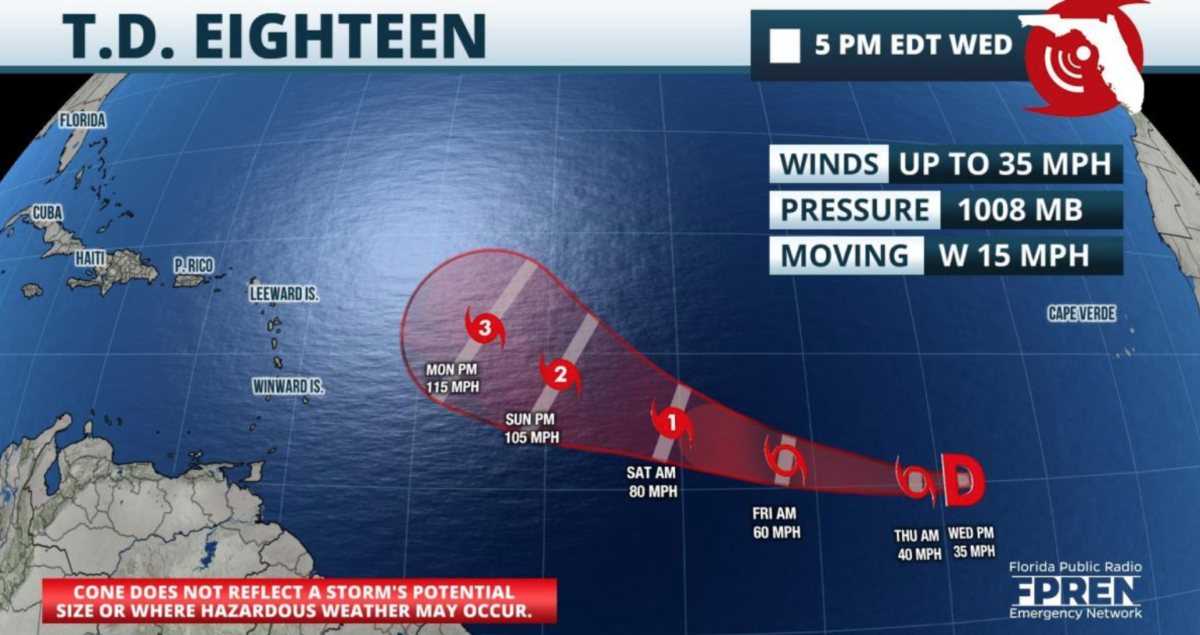 Tropical Depression Eighteen formed in the eastern Atlantic Ocean Wednesday afternoon and is likely to become a long-lived hurricane.

Tropical Depression Eighteen is expected to become a tropical storm by Thursday, acquiring the name Sam. It is then likely to move west to west-northwestward across the deep tropics and strengthen over the upcoming weekend. It remains unclear whether Tropical Depression Eighteen will affect the Caribbean or turn northwestward and bypass the Lesser Antilles to the north. If it does affect the Caribbean, it would likely happen early next week. Most of the global models forecast the storm to intensify steadily in the coming days, and the National Hurricane Center projects soon-to-be Sam to be a major category by Monday.

Confidence is quite low in its future path; there is at least a 1000 mile difference between the various global models. This is often a sign the atmosphere is in a chaotic, or highly unpredictable state, later this weekend and early next week. For that reason, it is not possible to be confident that Sam will turn out to sea like Tropical Storms Peter and Rose, and Hurricane Larry before it.

Elsewhere in the tropics, Tropical Storms Peter and Rose both weakened to tropical depressions. Peter is located about 215 miles north of San Juan, Puerto Rico as of early Wednesday morning. It is forecast to turn toward the north then northeast through Friday and dissipate this weekend well south of Bermuda. Rose is also expected to turn toward the north and northeast, and dissipate between the Azores and Cape Verde Islands late this weekend.

A separate area of low pressure is located a few hundred miles southeast of New Foundland. This low is the remnant of what was once Tropical Storm Odette which formed Friday afternoon east of North Carolina. The low could reacquire tropical or subtropical characteristics this week, but will eventually turn out to sea by the weekend.