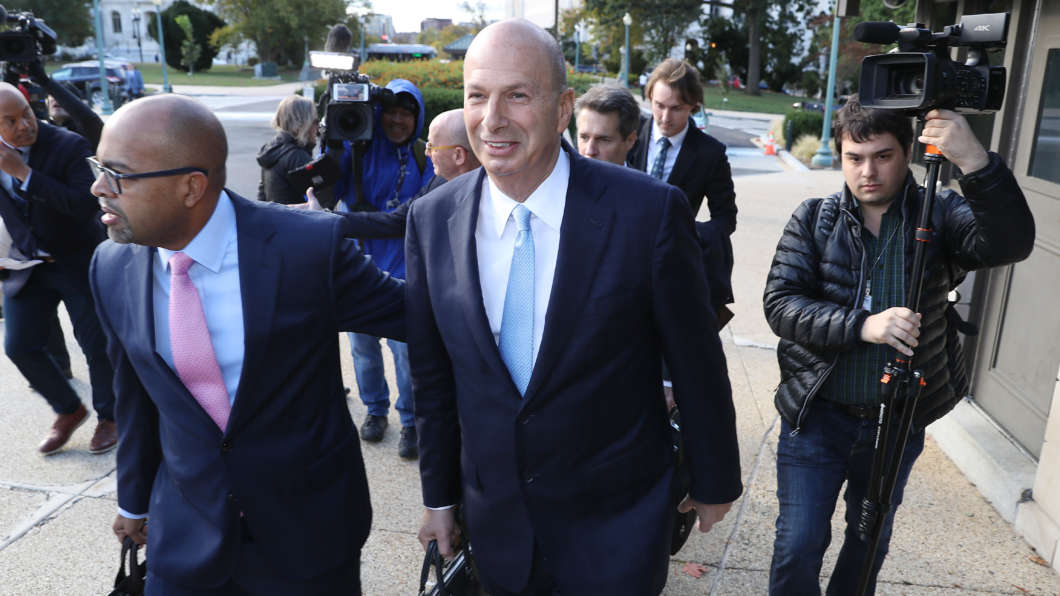 U.S. Ambassador to the European Union Gordon Sondland (center) arrives at the U.S. Capitol on Oct. 17. The transcript of his testimony was released on Tuesday.
Image credit: Chip Somodevilla

Editor’s note: This is a developing story and will update with more details of the testimony.

Congressional investigators have released the transcripts of a key players in the Ukraine affair and Trump’s impeachment inquiry — Gordon Sondland, U.S. ambassador to the European Union; and Kurt Volker, the former U.S. special envoy to Ukraine. (Read the full transcripts here and here.)

Sondland, in particular, is important. A major Trump donor, Sondland was in contact with the president and part of a campaign to get Ukraine to investigate conspiracy theories about the 2016 election and the Bidens’ connections to Ukraine.

For instance, Sondland testified that a July 10 National Security Council meeting was uneventful, while others said the meeting was problematic because of what they saw as pressure leveled by Sondland.

Sondland said he only talked broadly about investigations. The three witnesses said former national security adviser John Bolton quickly shut the meeting down. Fiona Hill, a former top Russia adviser on the NSC, said Bolton described what was happening as a “drug deal” and described the president’s lawyer, Rudy Giuliani, as a “hand grenade” who was going to blow everyone up.

In his prepared testimony to the committees on Oct. 17, Sondland wrote that “neither Ambassador Bolton, Dr. Hill, nor anyone else on the NSC staff ever expressed any concerns to me about our efforts, any complaints about coordination between State and the NSC, or, most importantly, any concerns that we were acting improperly.”

The top Ukraine expert on the NSC, Lt. Col. Alexander Vindman, testified that he did in fact raise his concerns directly to Sondland.

Sondland also said he was kept out of the broader plan to pressure Ukraine to investigate Democrats in exchange for aid and engagement with the White House.

In his testimony, Sondland said, “Withholding foreign aid in order to pressure a foreign government to take such steps would be wrong. I did not and would not ever participate in such undertakings.”

Testimony by Taylor and others appear to contradict Sondland’s insistence that he was unaware of such a campaign.