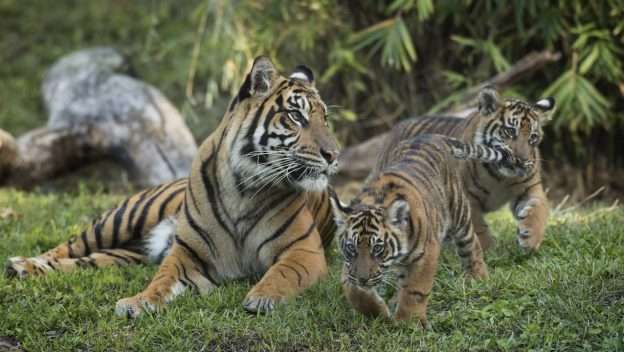 Holiday theme park-goers have some new baby animals to check out.

Disney visitors can try to get a glimpse of the first Sumatran tiger cubs ever born at Disney’s Animal Kingdom. Jeda and Anala have been getting used to their home—Maharajah Jungle Trek. Disney said they will be out for public viewing periodically as they acclimate to that space.

Disney’s blog posted a video of the cubs.

“Jeda’s personality is actually very similar to his dad’s. He’s pretty chill, laid- back, Anala on the other hand is very much like her mom, Sohni. She is quite feisty,” said animal keeper, Kim Jacobs.

Sumatran tigers are a critically endangered species. There are some 500 of them left in the wild.

At SeaWorld, guests can see two walrus calves, Ginger and Aku. They’re at the park’s Wild Arctic habitat. U.S. Fish and Wildlife Services sent Aku to Orlando after the calf was rescued from a gold mining dredge off Alaska’s coast. Ginger was born at SeaWorld this summer. SeaWorld said the two have been socializing and getting around the clock care—including bottle feeding several times a day.