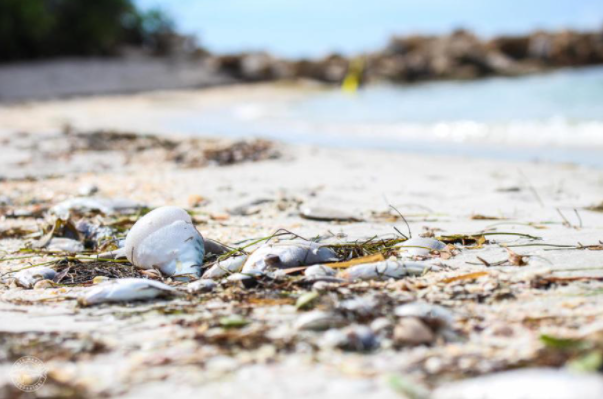 For two wet and dry seasons, researchers will observe Tampa Bay for nutrients and how they feed the red tide organism Karenia brevis.

A new research project from the University of Florida aims to determine which source of nutrient pollution has the biggest impact on harmful algae blooms in the Tampa Bay area.

Starting this summer, Amanda Muni-Morgan, an interdisciplinary ecology doctoral student in the UF/IFAS College of Agricultural and Life Sciences, will specifically study nitrogen from storm water runoff and rainfall.

“I’m hoping that knowing which nitrogen compounds are used by Karenia brevis can allow us to focus on mitigating those specific sources within the watershed, which can lead to best management practices, but can also influence what we do in our own front yard,” she said.

Red tide bloom in waters off of Fort Myers. (photo by: Amanda Muni-Morgan)

Muni-Morgan hopes her research will help individuals understand their influence on water quality, like using less fertilizer, picking up pet waste, and not blowing leaf litter into the streets.

“We think of fertilizers first and foremost as being an issue, which it is, but the contribution of nitrogen from the atmosphere in rainfall can be up to 47% organic nitrogen. And when you couple that with other organic nitrogen sources, such as leaf litter, reclaimed water, and even pet waste, all of that can end up into our receiving water bodies and impact water quality,” said Muni-Morgan.

“Lots of researchers study nutrients going into Tampa Bay. What makes Amanda’s work so important is she’s collaborating with the Red Tide Institute at Mote Marine,” said Mary Lusk in a press release.

“This work will help us better constrain exactly where the nitrogen is coming from, so we can target those sources. It may also help us design filters or artificial media that could be added to a pond or bioretention basin to remove specific nitrogen compounds.”

The team will work on this project for the next two years.

“I’m very excited, but I’m a little weary of storm chasing because that’s essentially what I’ll be doing, but I’m up for the task,” said Muni-Morgan.

“I chose this project because storm water is a significant issue, especially in the state of Florida,” she said. “We have storms that can be short in length, but high in intensity, and that means that a lot of water enters our water bodies, that goes over our streets and collects everything with it that we’re putting in our front lawns. And knowing how those specific nitrogen sources on an urban scale affect water quality is really important in potentially mitigating harmful algal blooms.”

The goal, she said, is to release seasonal findings from the study so we won’t have to wait the full two years for results.