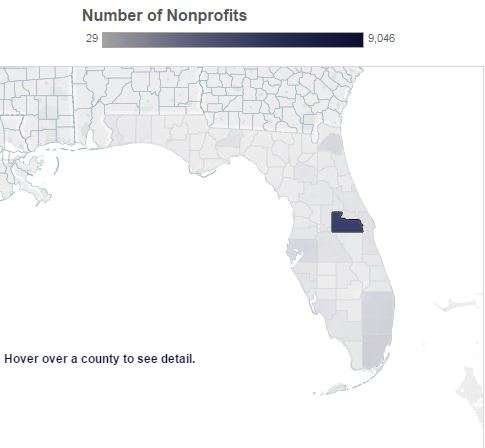 The report from the Florida Nonprofit Alliance (FNA), a statewide coalition of non profit groups, compared IRS data and other public information from the last decade and compiled it in an interactive dashboard.

According to that data, central Florida is now home to more than 14,000 nonprofits, with annual salaries ranging from $32,197 in Osceola County to $62,221 in Seminole County.

For Sabeen Perwaiz is president of FNA, the data show that the nonprofit sector is contributing to Florida’s economy.

“Often times, it’s construed as one that’s taking or always asking for funding, but the return on investment for the sector is significant,” she said.

Florida nonprofits now represent 6 % of the state’s overall work force with more than half a million workers.

Central Florida represents a large chunk of that percentage, along with southeast Florida and the Tampa Bay area.

But Perwaiz is concerned about the areas outside larger metropolises.

“[They] really don’t have a lot of resources, and so what does that mean for the future of Florida,” she said.

Orange County boasts the fifth largest number of nonprofits in Florida, with 5,836.