New revelations and 3 other takeaways from the first Jan. 6 committee hearing 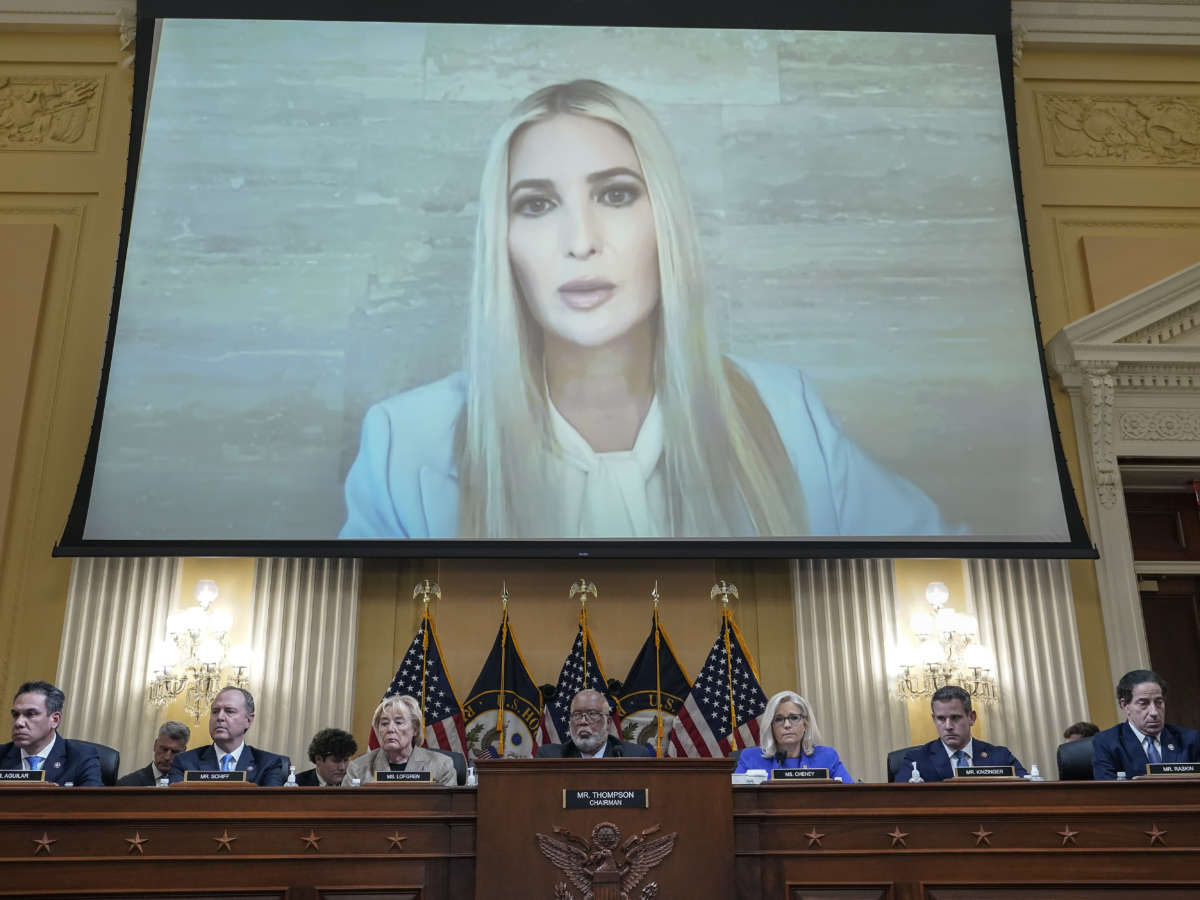 Ivanka Trump's testimony to the Jan. 6 committee is displayed on a screen during the committee's hearing on Thursday.
Image credit: Drew Angerer

It wasn’t clear what the country could expect from the Jan. 6 select committee’s beginning presentation of its findings, but the prime-time, opening-day hearing Thursday night had lots of new information, and it was presented in a calm and cogent way.

The committee transported the audience back to Jan. 6 with behind-the-scenes and up-close video of what happened that day. It also made a strong case that former President Donald Trump was the central character responsible for what happened — with on-camera testimony from many of the people closest to him, including his daughter Ivanka, who broke with him over his election lies that the election was stolen.

It wasn’t stolen, and the people closest to him knew it — despite Republican leaders who once criticized Trump for his role quickly reversing course to curry political favor with him.

“Tonight, I say this to my Republican colleagues who are defending the indefensible,” said committee Vice Chair Liz Cheney, R-Wyo. “There will come a day when Donald Trump is gone, but your dishonor will remain.”

The committee hopes it all breaks through with most Americans, especially as fewer are blaming Trump as being responsible for the insurrection than they did immediately following it, partisan gaps becoming wider, and with conservative media doing all it can to circle the Trump wagons and downplay the committee’s findings.

Here are four takeaways from the first day of the hearings:

1. New facts and information were revealed

2. The videos and production were effective.

It’s tough to command and keep an audience’s attention in prime time for a congressional hearing (competing with NHL playoffs, no less). And we won’t know how many people tuned in until later, but the video stood out as being powerful.

It effectively cut between Trump’s speech on Jan. 6 to show how it was egging the crowd on. Its use of stable overhead cameras showing the mass of the crowd overwhelming law enforcement, as well as the use of law enforcement body camera footage and radio conversations were strong. It showed the rioters were operating outside the law — and against police, a group Trump often holds up with reverence.

The video was also effective in showing Trump’s tweets and seeing militant members in the crowd, needing a mob fired up, literally reading from Trump’s tweets through a bullhorn almost as marching orders — all because Trump couldn’t handle losing and he lied to his crowd of supporters. Violence from the mob of Trump supporters — striking officers with hockey sticks in one scene — was interspersed with Trump saying just five days later that these were “peaceful” people.

The video also notably showed staffers from Republican leader Kevin McCarthy’s office hurrying for the exits. McCarthy originally criticized Trump and asked for him that day to call off the crowd — only to do an about-face, as he saw the House speakership on the horizon and needed Trump’s base of supporters.

Even Trump’s former chief of staff, Mick Mulvaney, said it was effective, calling it “stunning.”

3. The committee went after Trump, painting him as a rogue and dangerous president.

The committee, particularly Cheney, made a strong case that Trump is a threat to democracy — a rogue and temperamental character who didn’t listen to advice from anyone who disagreed about his election narrative.

But pretty much everyone around Trump knew the truth and couldn’t tame or control him, not only his attorney general and his daughter, but Fox’s Hannity and Trump’s press secretary, McEnany.

In new texts from Jan. 7, Hannity tells McEnany, “No more stolen election talk” and that the 25th Amendment possibility of the Cabinet removing Trump from office was “real.”

McEnany takes it as good advice, saying, “Love that. Thank you. This is the playbook. THANK YOU for your help.”

Cheney made the case that Trump didn’t want to stop the riot, that he was yelling and angry at advisers who were telling him that he needed to do more, and that he was watching on TV and aware of rioters chanting “Hang Mike Pence!”

Trump’s response to that? According to Cheney: “Maybe our supporters have the right idea. Mike Pence deserves it.”

4. One of the biggest problems in this country continues to be people not operating from or believing in a shared set of facts.

If you watched this hearing with a split screen between Fox News and everyone else, it was eye-opening.

While every other cable news channel carried the hearing live, Fox did not. It didn’t even cut away during the entire time its top host Tucker Carlson was on the air, making it less likely its audience would switch to any other channel to see the hearing, according to the left-leaning group Media Matters, which tracks conservative media.

Fox instead spun out narratives furthering Trump’s lies and downplaying the evidence presented. Fox’s audience was treated to narratives casting aspersions on the committee’s work, as well as a cast of Trump supporters, including Sen. Mike Lee of Utah, and former Trump administration officials, like controversial former chief of staff to the acting Secretary of Defense Kash Patel, former White House adviser Stephen Miller and former White House Chief of Staff Reince Priebus.

Ironically, Hannity, the very person who had been texting the White House, telling them to get Trump to stop the election lies, was on TV Thursday night with banners on the screen, exclaiming that there were “false narratives” from the hearing, calling it a “sham investigation” that was an orchestrated “anti-Trump show trial.”

The reality is: a significant portion of the country — and many of the very people who need to hear the facts about what happened on Jan. 6 — will have never heard the primary source evidence presented, making it difficult for Americans to get on the same page about what truly happened that day.