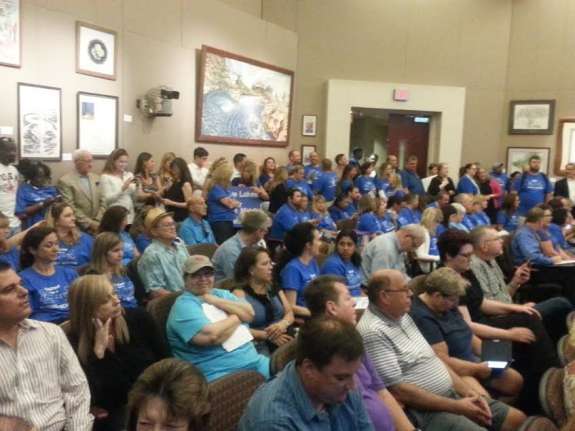 Over one hundred parents, administrators, and homeowners appeared at Tuesday's public hearing on the relief school. Photo: Renata Sago.

Orange County commissioners have delayed voting on whether to build a relief middle school in Timber Springs.

The board will consider a new proposal by developer Avalon Park Group to build and pay for five schools that could open as soon as next year.

The plan includes three new middle schools, an elementary school, and a pre-kindergarten facility. Avalon Park Group estimates the schools would curb overcrowding in the area by creating nearly 3,000 stations for students.

Sara Au was one of more than a hundred community members who attended yesterday’s public hearing. She wants the board to vote in favor of a relief school.

“It’s about doing what’s right for our communities, and not putting the political pressure on our children’s shoulders of zoning, of planning of overcrowding. There’s a lot of issues that go into this school and none of them are easy,” she said.

Barton Gregory joined Au at the public hearing. He is a homeowner in Timber Springs where one of the proposed relief middle school would be built. He’s concerned the site is too small and is urging the board to be strategic in dealing with where it places schools.

“This whole plan that they have to build the school needs to be revamped. The county needs to realize we’re one of the fastest growing counties in the country. Urban planning is essential right now. We need better plans,” he said.

The Orange County Commissioners will make a final decision about the relief school in May.