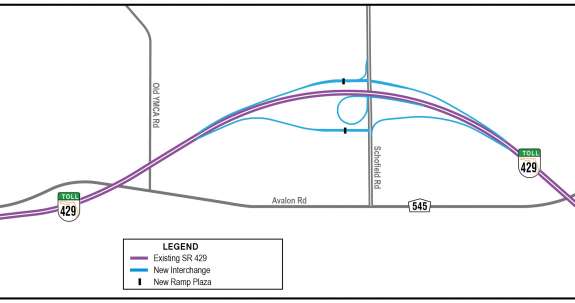 Four ramps will give drivers direct access to I-4 to the south and Apopka to the north. Photo: Central Florida Expressway Authority.

Up until now, it took longer for drivers in west Orange County to get to downtown Orlando and Apopka because there wasn’t a direct route between the 429 and Schofield Road.

The new interchange gives riders a straight shot to I-4 and Apopka. It has four ramps and two ramp plazas–one with a 75 cents cash toll and another with a discounted 55 cents lane for E-PASS users.

Expressway authority spokesman Brian Hutchings said the interchange is a response to changes in the area.

“There are rooftops popping up like mushrooms. The development out there is really taking root, and this interchange will really help improve access to the folks who live and work there in west Orange County.”

The project cost $10 million and took 10 months to complete.

The authority will start its next big project at Wekiva Parkway this summer.