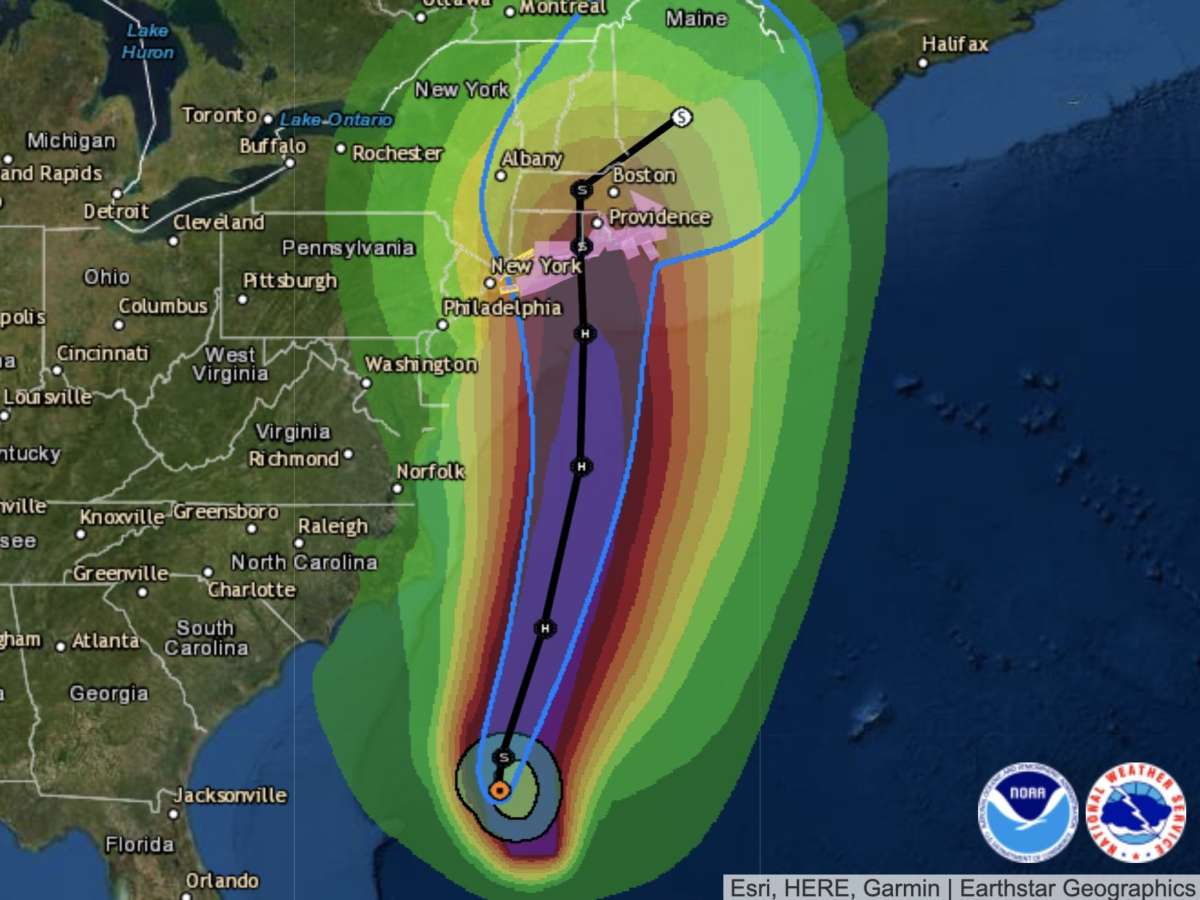 Tropical Storm Henri is predicted to become a hurricane before reaching the coast of southern New England. In this graphic, the bright colors depict the likely path of tropical-storm-force winds, which have a minimum threshold of 39 mph.

The National Hurricane Center has issued a rare hurricane watch for parts of New England, warning that Tropical Storm Henri will likely develop into a hurricane before making landfall on the northeastern U.S. coast this weekend.

“If Henri strikes southeast New England as a hurricane this weekend, it will be the first direct hurricane landfall since Bob in 1991,” National Oceanic and Atmospheric Administration spokesman Chris Vaccaro told NPR.

Henri’s maximum sustained winds grew to 70 mph on Friday, making it “almost a hurricane,” the NHC said in its 2 p.m. ET update. Hurricanes have sustained winds of at least 74 mph.

The hurricane watch was issued early Friday, covering a large portion of Long Island and areas from New Haven, Conn., to Sagamore Beach, Mass., the National Hurricane Center said. Resort islands such as Block Island, Martha’s Vineyard and Nantucket are also in the watch zone.

In addition to strong winds and heavy rain, forecasters are warning of a storm surge that could inundate land with 3 to 5 feet of water.

“Confidence is high that the event will occur Sunday into Monday,” the National Weather Service office in Boston said in a briefing early Friday. It added that damaging winds were especially possible east of Henri’s track, while rains could cause flooding to the west of the storm’s path.

New England is under its first hurricane watch in years

When the NHC issued its advisory early Friday, “it had been nearly TEN YEARS since a Hurricane Watch has been issued for Southern New England,” meteorologist Aaron Perry of NBC Boston said on Twitter.

Henri is expected to bring 2 to 5 inches of rain to eastern Long Island and southern New England, with some areas seeing nearly 8 inches.

“The soil is going to get saturated, in some places it’s already saturated,” NHC Director Ken Graham said in a midday update on the storm. He added, “Put some winds on top of that, you’re going to knock down a lot of trees. You’re going to have power outages.”

Graham urged residents and travelers to be vigilant, warning of “significant impacts” from Henri.

The hurricane watch for Henri comes just one day after the 30th anniversary of Hurricane Bob’s landfall on New England.

Bob wrecked swaths of the coast and knocked out electricity in Cape Cod and other areas — in some cases, for as long as two weeks.

“At least 17 people were killed in the storm, the costliest in New England with more than $1.5 billion in property damage,” The Associated Press reports.

Henri’s impact will depend on its path and timing

At midday on Friday, Henri was roughly parallel with the Georgia-Florida line, hundreds of miles from the coast. The storm was moving northwest, but it is expected to make a sharp right turn toward the north.

It’s expected to strengthen over the next two days as it traverses very warm waters, likely becoming a hurricane by Saturday. It will then cross the north wall of the Gulf Stream.

“Henri’s expected slower motion over the colder water south of New England should induce quick weakening,” the hurricane center said in its 8 a.m. ET forecast, “but it may not be quick enough to keep Henri from reaching the coast as a hurricane.”

The effect of the storm’s slow pace is unclear. As member station WBUR reports:

“The slow movement may mean that it turns up the waters of the coastline. This mixing would cool the waters, causing the storm to lose its strength rather fast. But on the other side of the coin, slow movement can allow a lot of rain to fall, and could cause storm surge to last longer.”

Hurricane Grace is bearing down on Mexico

People along Mexico’s central eastern coast are bracing for the arrival of Hurricane Grace, which is currently packing sustained winds up to 85 mph, the National Hurricane Center said on Friday.

A hurricane warning is in effect along the coast, from Puerto Veracruz to Cabo Rojo.

“A Hurricane Warning means that hurricane conditions are expected somewhere within the warning area, in this case within 24 hours,” the NHC said.