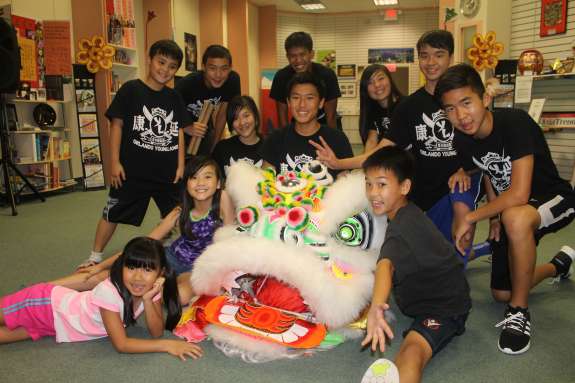 Lion dancing is among the programs the center offers. Photo by Amy Green

But a new cultural center is emerging in a quiet corner of the Fashion Square Mall, passing down traditions from Vietnam and the other countries that make up the region’s Asian-American community.

A group of children take up traditional Asian instruments.

Eleven-year-old Ivan Lam is one of the dancers.

“It’s supposed to give good luck to new places. So when someone lion dances you have to be happy when you do it.”

He says the dancing requires a lot of practice.

“You need a lot of effort to do it. You can’t just come here and do it and that’s it. You need to practice at home and do it a lot.”

Lion dancing is among the programs the center offers.

Shally Wong, publisher of Asia Trend magazine, established the center in November after the mall’s owner approached her, offering to help. She says the center is aimed at helping Asians balance American culture and their own heritage.

“And I believe that is possible. I don’t want to lose it. I don’t want to say I want to keep my Asian culture. Then I need to go back to Hong Kong, and I don’t think that. I can bring what I think is good to the place I live. Especially in the United States I think I can do that.”

Wong immigrated from Hong Kong 20 years ago with her family and long had wanted to create a gathering place for Central Florida’s Asian community, including the region’s third-largest Asian population, Vietnamese. She designed the center with her father in mind.

“He likes to talk to people, but there’s not too many places that will have that kind of facility for them. So I really think if this can be done 20 years ago he will stay. He will not choose to go back. But I cannot change the history. But I can make the difference.”

Community is at the heart of the center. Wong designed it to reflect the region’s diverse Asian population. There’s information on local Asian organizations and upcoming events and shelves of foreign-language books. Soon Wong wants to expand the center, adding classes in English and seminars on health care.

Mahjong in China is a high-stakes gambling game, like poker. Center volunteer Robert Lee remembers watching it being played in New York City’s Chinatown as a child.

“I used to go there and just watch with my father the game. You were never as a child allowed to play. You’re only allowed to play as an adult, usually.”

Sue Chiu is among the players. Speaking in Mandarin, she says she enjoys the conversation.

“They say we are all from Chinese, and then we all come from one culture, and she feel very happy to be here and play mahjong, and sometimes they sing karaoke.”

Back at the lion dance practice, Sidney Tse says her 14-year-old daughter Sarah practices three times a day, rising at 6 a.m. to get in an early-morning work-out.

“She kind of learn, found herself in here, than like hiding in a corner. I mean most of the Asian kids in school, they are kind of quiet, and they don’t social. And now they have themselves, and she just become a different kid.”

Nineteen-old Duc-Quy Nguyen explains one dancer is costumed as a monk, who taunts the lions.

“What the lion does is it’s supposed to scare away the evil spirits. So that’s what the monk is trying to do. He’s trying to bring the lion around the whole vicinity of a business or restaurant to try to bring good luck for the new year.”

When the dance ends the dancers are breathless. They earn claps from Tse and the other waiting mothers.