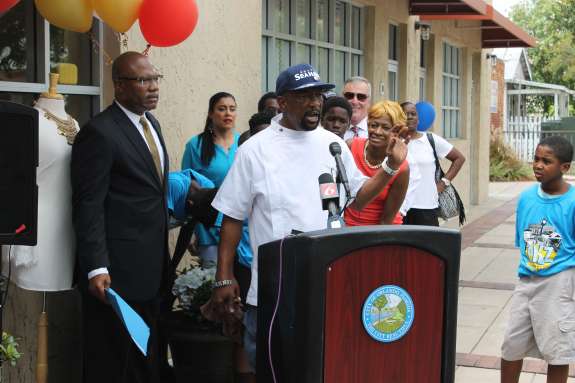 Orlando leaders have cut the ribbon on a newly renovated row of shops in Parramore. Mayor Buddy Dyer touted the shops on South Parramore Avenue as an example of the urban renewal underway in the neighborhood.

“I go to the mosque that’s close by here, and I just drove past and saw there was spaces for lease, so I talked with the owners and it just worked out really really well, thank God,” she said.

“A lot of people say why here, why Parramore, and I always say why not? I just know there’s potential growth. I can see the growth that’s coming, the soccer stadium that’s being built,” said Muhammad.

“It feels good to be here.”

Malik Williams owns the Parramore Stylin barbershop at one end of the renovated building.

“It’s inspiring for me,” said Williams.

“It creates a mindset of opportunity that’s in front of us. And from being able to come in and do the right way, it just shows the ability for growth,” he said.

Williams also said he welcomes the new soccer stadium which is set to open in late 2016.

But José Colom, a business owner in Parramore, said the city needs to invest more in infrastructure in the neighborhood.

“We have to intervene with poverty, we’re fighting poverty here,” said Colom.

“So we definitely have to move this on, but with the money of the city, not with private funding.”

Parramore is poised for big developments in the next few years- including a new soccer stadium and a new pre-schoo through 8th grade school.