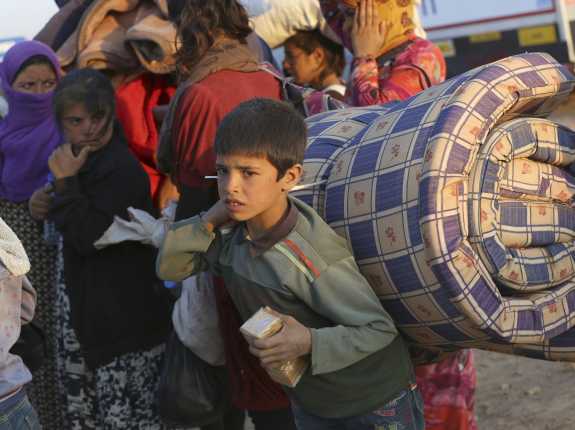 Witnesses in eastern Syria near the Turkish border report a fresh round of airstrikes against Islamic State positions. The Pentagon has confirmed the reports.

Using an alternate name for the extremist group, the U.S. Central Command said in a statement:

The new strikes come a day after the U.S. and five Arab allies carried out air attacks and cruise missile attacks across northern Syria, targeting not only the self-declared Islamic State, also known as ISIS or ISIL, but also two other extremists groups — the Nusra Front and the largely unknown Khorasan group, which U.S. officials have said was planning attacks on U.S. and Western interests.

NPR’s Dina Temple-Raston has a detailed Khorasan explainer here. And, The New York Times reports today: “American military and intelligence analysts were still studying damage reports from the initial air assault, but senior Obama administration officials expressed hope that they had killed Muhsin al-Fadhli, the leader of Khorasan and a onetime confidant of Osama bin Laden. The officials said they had been contemplating military action against Khorasan in recent months, but President Obama’s decision to hit the Islamic State’s forces inside Syria provided a chance to neutralize the other perceived threat.”

On the latest attacks, The Associated Press says: “It was not immediately clear who carried out the airstrikes in and around Boukamal, the Britain-based Syrian Observatory for Human Rights said. But the activist group cited locals as saying the intensity of the air raids was similar to that of strikes on the town early Tuesday by the U.S.-led military coalition.”

Reuters quotes Rami Abdulrahman, who runs the Syrian Observatory for Human Rights, as saying the border town of Albu Kamal and surrounding areas had been hit.

“Albu Kamal, on the main Euphrates River valley highway, is one of the most important border crossings between Iraq and Syria, along a frontier that Islamic State wants to erase after seizing territory on both sides and declaring a caliphate,” the news agency says.

President Obama is set to address the United Nations General Assembly today to discuss, in part, the ISIS threat.

NPR’s Michele Kelemen reports that the Security Council is expected to adopt a resolution to encourage countries to crack down on the flow of money to extremists and to encourage the prosecution of citizens who join terrorist groups.

The latest strikes also come as Britain’s Prime Minister David Cameron could announce soon that his country will join in the airstrikes.

“Cameron is due to set out his position in a speech to the U.N. General Assembly in New York on Wednesday night at which he will call on the world to unite to destroy Islamic State (IS)militants, whom he has warned are planning to attack Britain.

“The decision to strike in Iraq would be at Baghdad’s request. Cameron is due to meet Iraqi Prime Minister Haider al-Abadi on Wednesday. Sources in Cameron’s office expect him to request British air strikes against IS during the meeting.”

NPR’s Ari Shapiro, reporting from London, says Iraq’s President Fuad Masum is expected to ask for British military assistance and that Cameron will likely call for a vote in Parliament. Opposition leader Ed Miliband told the BBC he expects his party to support airstrikes against the group.

Meanwhile, the U.N. High Commissioner for Refugees said Turkey needs help urgently to deal with a sudden influx of more than 130,000 Syrian Kurds who have fled the fighting.

” ‘We will give the necessary support to the operation. The support could be military or logistics,’ ” he told reporters in New York, where he is attending the UN General Assembly meeting.”

The U.N. World Food Program is also warning that money needed to feed Syria is simply not there.

Speaking to NPR’s Morning Edition, the agency’s emergency coordinator for Syria, Muhannad Hadi, says: “The problem is that we don’t have enough funds to continue supporting the people inside Syria and the neighboring countries. It’s very unfortunate. The Syrian people are now totally dependent on the World Food Program.”