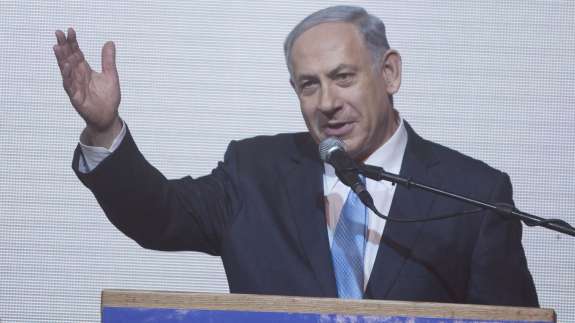 Israeli Prime Minister Benjamin Netanyahu speaks to supporters Tuesday at his election campaign headquarters in Tel Aviv. If he succeeds in forming a coalition government, he would begin a historic fourth term.
Image credit: Lior Mizrahi

With nearly all votes counted in elections for the Knesset, Israel’s parliament, Benjamin Netanyahu’s center-right Likud party has won at least a five-seat victory over its principal rival, the center-left Zionist Union.

Israeli media report Likud has 29 or 30 seats in the 120-member Knesset to the Zionist Union’s 24 seats.

But as the actual votes were counted the results were quite different.

Netanyahu must assemble a coalition of parties totaling at least 61 seats to form a new government.

If he succeeds in forming a coalition government, Netanyahu would begin a historic fourth term as prime minister of Israel.

“Netanyahu, who already has a testy relationship with President Barack Obama, took a sharp turn to the right in the final days of the campaign, staking out a series of hard-line positions that will put him at odds with the international community.

“In a dramatic policy reversal, he said he now opposes the creation of a Palestinian state — a key policy goal of the White House and the international community. He also promised to expand construction in Jewish areas of east Jerusalem, the section of the city claimed by the Palestinians as their capital.

“Netanyahu infuriated the White House early this month when he delivered a speech to the U.S. Congress criticizing an emerging nuclear deal with Iran. The speech was arranged with Republican leaders and not coordinated with the White House ahead of time.”