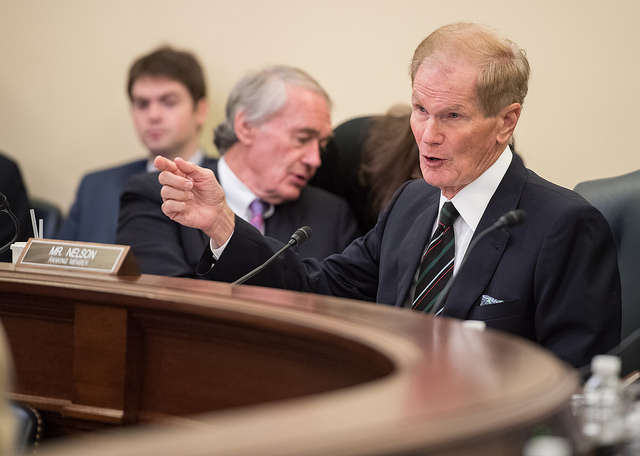 He didn’t concede, and his campaign officials were looking into reports that a handful of districts in Democrat-rich Broward County couldn’t electronically submit their votes, so they had to gather them on thumb drives. Photo: Flickr Creative Commons

Longtime U.S. Senator Bill Nelson was defeated in his attempt for a fourth term in Washington. WUSF’s Steve Newborn reports it leaves the Democrats without a single statewide elected official.

The blue wave didn’t happen – as least not in Florida. It was more like a red wave, and the tide took away the longest-serving – and only statewide Democrat – in its wake.

Bill Nelson was narrowly defeated in his quest for a fourth term in the U.S. Senate by Florida Governor Rick Scott. It likely means the end of the political road for Nelson, the Brevard County Democrat who was first elected to Congress in 1972.

It was after midnight in a downtown Orlando hotel when Nelson’s former chief of staff, Pete Mitchell, said media reports were calling the race for Scott.

“The senator will be making a full statement tommorow to thank all those who rallied to his cause. Thank you.”

He didn’t concede, and his campaign officials were looking into reports that a handful of districts in Democrat-rich Broward County couldn’t electronically submit their votes, so they had to gather them on thumb drives.

What had been a raucous scene at Nelson’s watch party at an Orlando hotel became serene pretty early on. People were leaving long before results were complete.

“You could kind of see it coming with the way people were talking, and the way Trump was stirring up his base.”

Vasquez said in the past few weeks, he didn’t see much sign of Democrats being motivated to vote.

“For the most part, it was pretty even. It was split down the middle. It was really divided… everybody had their own ideology and they were sticking to it, no matter what. And nobody’s mind was changing?

“No, everybody was sticking to their side, and that was it. You couldn’t talk them out of anything.”

Many people believed Nelson would be helped by a big turnout for Andrew Gillum, sending waves of Democrats to the polls. But Republicans seemed to be more motivated to vote, sending Ron DeSantis to the governor’s mansion and Scott to Washington, D.C.

“For Nelson, what it probably means is it pretty much ends his political career.”

“He’s had a long career as what you might call a moderate, centrist Democrat. That’s been his goal, to be that a business friendly, thoughtful, comparatively soft-spoken worker in both Congress and the Senate.”

The 76-year-old Nelson has been a fixture in Florida politics since he was elected to Congress when he was 30 years old. The native of Melbourne was an ardent backer of the space program, representing the Space Coast.

Nelson was rewarded for his advocacy by being chosen to fly on the Space Shuttle. His flight on the Columbia in 1986 became part of his campaign lore and figured prominently in his election campaigns.

He served in Congress until 1991, but he lost the Democratic primary for governor to Lawton Chiles, who later captured the governor’s mansion. He was out of office briefly before being elected to what was then called the state treasurer, insurance commissioner and fire marshal.
March said Scott was Nelson’s toughest opponent yet.

This time, it appeared that Nelson was the one who couldn’t garner enough support. Scott will join fellow Republican Marco Rubio in the Senate – in January.