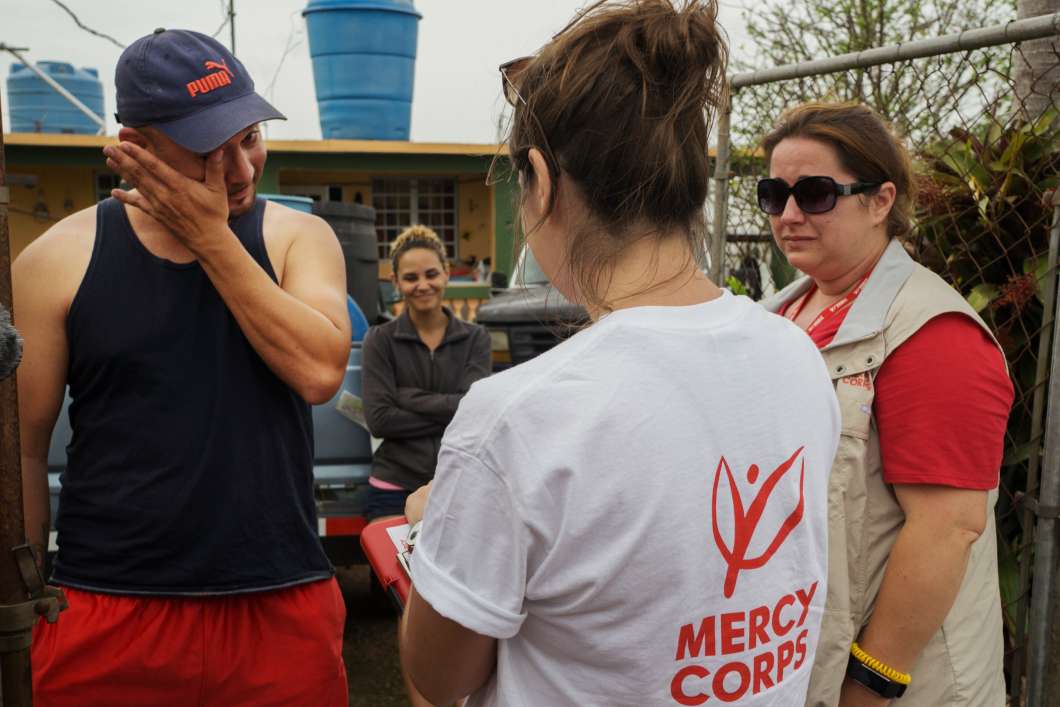 Before they hand over the cash, Mercy Corps staffers are going door to door to find out: What would people buy?

Batista, 30, lives at the bottom of a hill on the outskirts of Maricao, a mountain town. Hurricane Maria tore the roof off her prefab house, and now she is living with her husband and two kids at her father-in-law’s house next door. There’s a plastic receptacle that looks like a giant blue trash bin on the roof for collecting rainwater. There still isn’t running water or power in the area — like much of the island.

Family members are barely scraping by. They live on the income from her husband’s part-time job, where he works four hours a day, and the $412 they receive in monthly food assistance from the Puerto Rican government.

Batista is visibly worried. She wants to move the family to New York, where her husband’s father lives. “I’m an adult. I can handle the difficult times,” she says, holding back tears. “But not the kids.”

Mercy Corps, an international aid organization, has handed out emergency cash to Syrian refugees in Greece and families affected by war and violence in Mosul, Iraq. And now, it has come to do the same for survivors of Hurricane Maria in Puerto Rico.

House by house, the group is feeling out what $100 can do for 2,800 hard-hit families across the island.

“Just a little something”

It could cost billions of dollars for Puerto Rico to recover and rebuild — so a little over $300,000 from one aid organization doesn’t sound like a huge investment. But these are uncertain times. Electricity is on one day and suddenly out the next. Many people haven’t had a steady paycheck in weeks or received government aid.

The extra money could make a significant dent for a family of four or five. The idea is to let people decide what they need, right now, be it food, water, a tarp for the roof or diesel fuel for their generator.

“Just a little something to address immediate needs,” says Jill Morehead, the head of Mercy Corps’ relief efforts on the island. “Cash helps give people back dignity and choice for determining their most basic needs, in addition to supporting local markets and small businesses.”

That’s one of the main reasons cash distribution is a growing trend in disaster settings. Since 2014, Mercy Corps has implemented cash programs in 31 countries. But this is the first time the group is trying it out in Puerto Rico, a U.S. territory.

Case studies have shown that cash aid is an effective way to help people in need. In crises where people have had to flee their homes, it can buy the next meal. It can also supplement incomes for people living below the poverty line. Rigorous, independent studies have shown that people generally don’t spend the money on nonnecessities like tobacco or alcohol.

“It’s more or less the same as welfare, which the U.S. has had for a long time,” says Amanda Glassman, a senior fellow at the Center for Global Development. “But what makes this really interesting is that it’s an NGO giving out the cash in lieu of the government.”

Since Mercy Corps arrived four weeks ago, it has already distributed 290 MasterCard prepaid debit cards, in $150 to $200 increments, across the island. Funding comes from private and individual donors.

Now, the group is focusing on giving out another round of money in two municipalities in the west of the island: Las Marias and Maricao. It worked with Long Term Recovery Group, a local organization that operates in this region of Puerto Rico, to identify the most vulnerable communities. Many residents are still waiting for money from the Federal Emergency Management Agency.

Benitez lives with his wife, two daughters and two young grandchildren in a low-income neighborhood deep within the sunken hills of Lares. His house is at the dead end of a long and winding road.

Soon after the storm, he went down to the community center in Lares to see whether he could get any help. “One group gave me one bottle of water and the choice of one pear or one apple,” he says. “But not both.”

He begged local officials for water, and they finally gave him some. But it was for cleaning and washing – not to drink.

Benitez’s biggest problem right now is “not the food. It’s the water,” he says. That’s what he would buy if he had $100.

Cash can get you only so much

For the most part, the local grocery stores in Lares and San Sebastian, where people from Las Marias and Maricao shop, have some food. The meat aisle may be halved, but there are so many people living without power, most have been buying precooked meats like ham and canned Vienna sausages. What they don’t have — but residents desperately need — is enough water and ice.

People from all over western Puerto Rico shop at Mr. Special, a local supermarket on the main road in Lares. Store manager Jose Mendez says the water and ice shipments have been arriving irregularly — sometimes not even the full amount. When he puts out the goods, they run out in about a half-hour. A line forms, and customers are allowed to buy one bottle of water and one bag of ice per person.

Mendez has another problem: Mr. Special can only take cash payments at the moment. Because the storm has disrupted telecommunications, Mendez can’t get the computers at the cash registers online.

It also means people can’t use their tarjeta de la familia, or family card. It’s a monthly stipend of money that the Puerto Rican government gives low-income families to purchase groceries. And on this part of the island, thousands of families depend on it. A family of two gets about $200 a month; a family of four, about $400.

When he is not able to use his card, Benitez says, he leaves his shopping cart right where it is — even though it’s full of groceries — and walks straight out the door. It pains him to have to return to his family empty-handed.

For Morehead, a trip to Mr. Special validates what she has seen and heard in her surveys. Because of the problems with the registers in Lares and San Sebastian, Mercy Corps will have to give this round of money to people in actual cash. The group previously distributed MasterCards, but the supermarkets in those areas had more reliable payment systems.

Morehead also saw that people continued to have difficulty accessing clean drinking water. The shelves at Walgreens, Mr. Special and Econo, another local supermarket chain in Lares, were empty. When there is water, it is expensive — about $1.25 a bottle.

The shortage of water has made people desperate. On the outskirts of Maricao, people are siphoning water dripping from a main that has been damaged by severe mudslides after the storm. They told Morehead that they were just using it for cleaning and cooking. But she suspects some are drinking it, too. She doubts it’s safe to drink.

Mercy Corps has added water filters to its upcoming aid delivery. It will also provide solar lanterns with USB ports. Many people have been using their cars to charge up their cellphones, then driving 30 minutes out of town to find a signal.

The group hopes to deliver the aid package at the end of the month. But if workers make it back to Benitez’s home, it will be too late.

He and his family are leaving Puerto Rico next week, driven by something Benitez saw and said he will never forget.

One of his granddaughters was lifting an empty plastic bottle to her mouth. Over and over again she was trying to drink.

Benitez had run out of water and had nothing to give her. He says, “That’s when I knew it was time for us to go.”