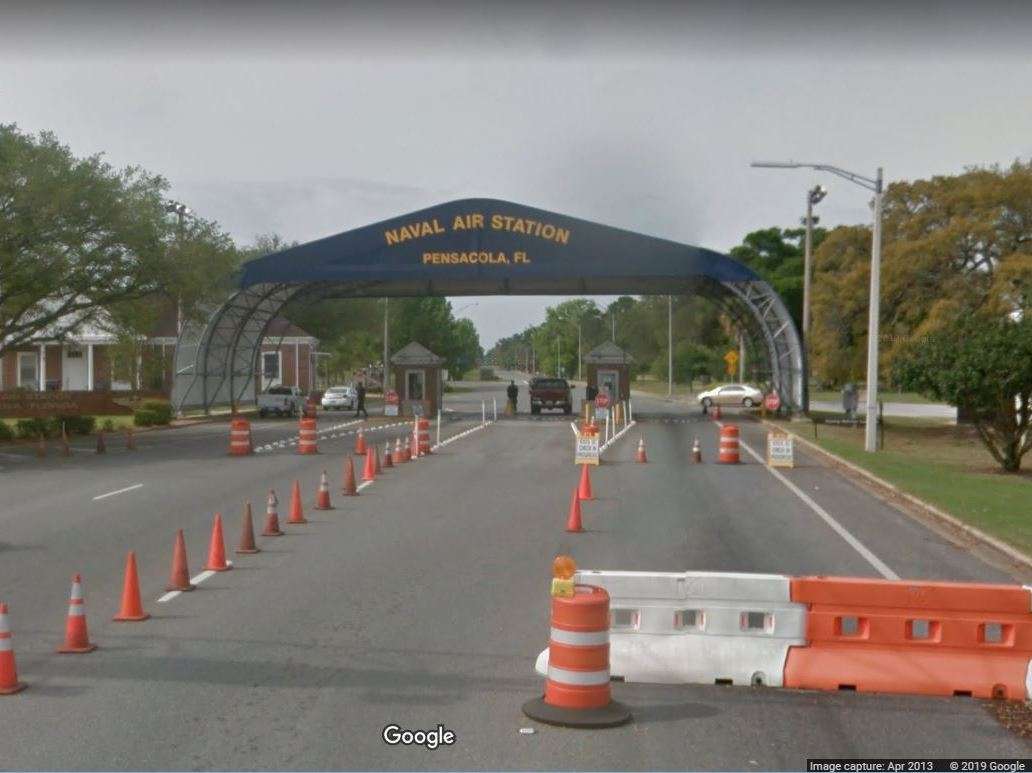 An active shooter situation at Naval Air Station Pensacola ended with the shooter's death, the Navy says. One additional fatality has also been confirmed.

The gunman who killed three people at Naval Air Station Pensacola on Friday morning was a Saudi aviation student, officials say. The gunman was killed by a sheriff’s deputy after the shooting, which left eight people injured.

“There’s obviously going to be a lot of questions about this individual being a foreign national, being a part of the Saudi air force, and then to be here training on our soil – to do this,” Gov. Ron DeSantis said in a news conference Friday afternoon. He added that the FBI is working with a number of other agencies to investigate.

The Pensacola air station is a training ground for students from various branches of the U.S. military, along with personnel from U.S. allies abroad.

Kinsella declined to give details about whether the Saudi man was in his country’s air force, and he didn’t describe what the man was studying, other than saying, “He was in the aviation pipeline.”

“Weapons are not allowed on base,” he said, referring to the Pensacola base’s policy of not allowing any personnel to carry a firearm unless they’re specifically authorized to do so and need a weapon to perform their duty, such as providing security.

President Trump spoke about the shootings at a White House event Friday, saying, “It’s a horrible thing that took place and we’re getting to the bottom of it.”

“This was not a murder, this was an act of terrorism,” Rep. Matt Gaetz told local TV station WEAR 3 News.

Noting that the FBI is taking over the case from the Naval Criminal Investigative Service, he said, “that is the signal that this will now be treated by our government as an act of terrorism – not a murder.”

Gaetz said, “it remains to be seen whether or not this person acted alone or whether there were other individuals involved” in carrying out the attack.

Trump issued two tweets about the Saudi link to the attack, saying he has been in touch with the kingdom’s leader:

“King Salman of Saudi Arabia just called to express his sincere condolences and give his sympathies to the families and friends of the warriors who were killed and wounded in the attack that took place in Pensacola, Florida….

“….The King said that the Saudi people are greatly angered by the barbaric actions of the shooter, and that this person in no way shape or form represents the feelings of the Saudi people who love the American people.”

Of the gun used in the shooting, Escambia County Sheriff David Morgan said, “It was a handgun.”

The first call of an active shooter came in at 6:51 a.m. local time, Morgan said.

Deputies who responded to the scene engaged the attacker in a shootout that transpired over two floors of a classroom building at the military base, Chief Deputy Chip Simmons said. One of those deputies killed the shooter, he said.

Two sheriff’s deputies who responded to the scene have injuries that are not life-threatening — one was shot in the arm and one in the knee, officials said at a news conference held at the air station’s front gates late Friday morning.

“Walking through the crime scene was like being on the set of a movie,” Morgan said.

He says his agency is not looking for any other assailants.

“There was some real heroism today, I mean real heroism,” Kinsella said in an afternoon news conference. He added, “I’m devastated. We are in shock, this is surreal. But I couldn’t be prouder to wear the uniform that I wear, because of my brothers and sisters in uniform – civilian or otherwise, what they did today to save lives.”

The U.S. Navy says the air station will be closed for all of Friday as authorities investigate, with only essential personnel allowed onto the site.

Gaetz tells WEAR 3 News that the attack took place at Building 633, which he describes as “right in the center of the campus.”

The large building houses the Naval Air Schools Command, and in Navy documents that are online, Building 633 is identified as the place where new aviation students should report to have their orders signed.

The nearby Baptist Hospital says it received eight patients from the shooting; authorities later said one of those patients had died while receiving care. The hospital did not provide other details, other than saying it’s working with the Navy to get in touch with relatives of the people who were hurt.

Residents who live near the air station tell local media outlets that they heard sirens and an emergency bulletin over the PA system, telling them to get somewhere safe.

“Both gates of NASP are currently secured due to reports of an active shooter,” the air station announced in a brief Facebook post about the attack Friday morning.

Hours after the active shooter situation ended, half of the large military installation remained under lockdown conditions. Around midday, authorities ordered non-essential personnel on the western side of the campus to leave the station. It added, “If you are on the east side of the Interior Command Posts on Taylor or Radford, remain sheltered in place.”

Naval Air Station Pensacola is large, with more than 16,000 military and 7,400 civilian personnel in Escambia County, Fla. It includes Navy and Marines aviation training centers, and it’s the home of the Blue Angels flight aerobatics team.

“We’re a military town,” Pensacola Mayor Grover C. Robinson IV said, adding that the community’s “hearts and prayers” are with those affected by the attack.

Robinson said both the White House and the governor’s office have also been in touch to offer their support and help in the aftermath of the shooting.