National support pours in for Orlando 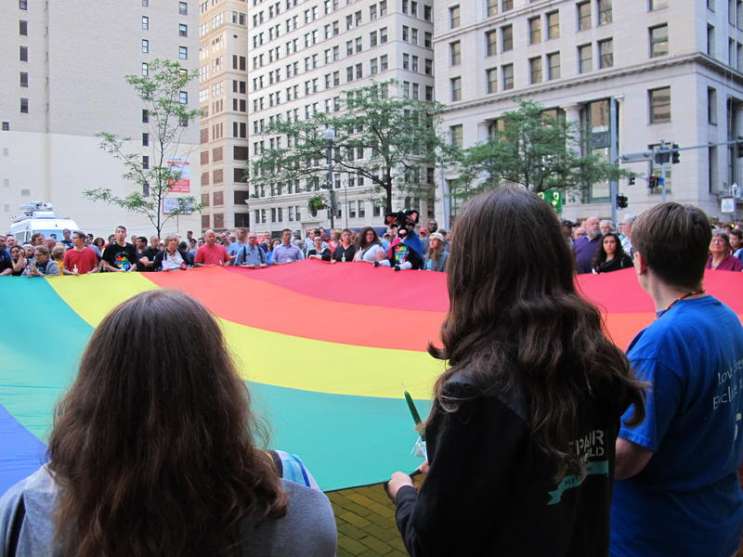 Thousands of people gathered across Orlando city hall to remember those who died in the mass shooting. Vigils have been taking place across the country as cities show their solidarity for Orlando and its LGBT community. In Austin Texas, Mayor Steve Adler spoke to the crowd.

“I want you to take time today, tomorrow, this week, this month and even right now to go out in public with the one you love and hold hands and kiss and don’t be afraid.”

Sunday’s shooting hit close to home in Colorado, where a gunman opened fire in an Aurora movie theater in 2012. Here’s Denver Mayor Michael Hancock
“And together with everyone, not just the LGBTQ community, but with our Muslim brothers, our Jewish brothers, our Catholic brothers and sisters.”

“But that sun will rise from something like this. We will have our moment in the sunshine once again and we will sing with pride and we will lock arms with our brothers and sisters. We will honor and remember those that were lost to this incredible tragedy and we will move on.”

“The people of Orlando need to know that all of us throughout the country are gathering in places of faith and worship to hold vigil and to say we are with you and we are praying for you and we are thinking about you and we are sending that to you.

Abdul Bargouthi, a leader at the Northern Nevada Muslim Community Center, said this in Reno:

“This is because of us who sit silently while somebody says a derogatory term on the bus, on the street corner, at the family reunion.”

In Kansas City, MO, people prayed and worshiped at the Islamic Center of Johnson County.

Music and chants were a big part of morale raising efforts. Peggy Johnson opened a vigil in Oklahoma City with a version of Holly Near’s “Mountain Song,”

“Now you may drive a big machine, but I was born a great, big woman and you can’t just take my dreams away without me fighting.”

And chants echoed from the crowd in St. Louis, MO.