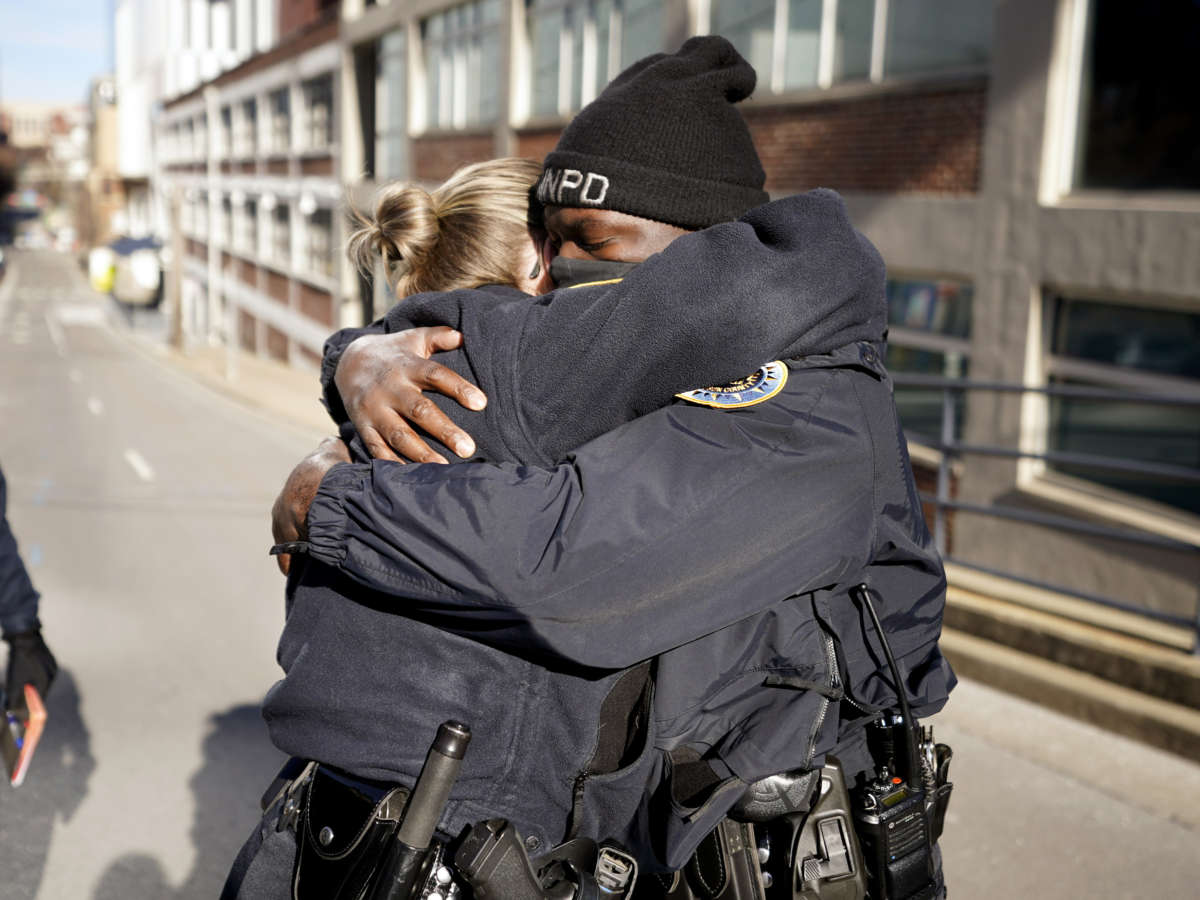 Nashville, Tenn., police officers Brenna Hosey and James Wells embrace after speaking at a news conference on Sunday. Hosey and Wells are part of a group of officers credited with evacuating people before the explosion that occurred in downtown Nashville early Christmas morning.
Image credit: Mark Humphrey

Authorities continue to ask those who knew or encountered the suspect to contact the FBI. The agency is still investigating, but there is no indication that anyone else was involved, Cochran said.

Officials said DNA testing of human remains on the scene matched to Warner. They said no other threats were known against the city but wouldn’t comment on possible motives for the bombing.

According to NPR member station WPLN, Warner had owned a home in the suburban Nashville community of Antioch that was searched on Saturday by federal officials.

The investigation into the bombing has brought hundreds of law enforcement personnel — including agents from the FBI and the Bureau of Alcohol, Tobacco, Firearms and Explosives — into the Tennessee capital to comb through the wreckage and investigate more than 500 leads.

The Friday morning blast came from an RV parked outside an AT&T building. No fatalities were reported, but three people were hospitalized for their injuries and dozens of buildings were damaged.

The effects of the blast were still being felt more than 48 hours later. Some police and hospital communications systems are still out in some areas of Tennessee, as well as in neighboring states.

City officials on Sunday credited the city’s police officers for their quick work to evacuate the area, averting potential tragedy.

“Their actions saved lives,” Mayor John Cooper said. “They may consider what they did was just a regular part of their duties. But we in Nashville know it was extraordinary.”

Speaking to reporters Sunday morning, police described the scene they encountered upon responding to a 911 call shortly before the bomb went off that reported shots fired in the area. Soon after officers arrived, a recorded female voice started sounding from the RV, warning it was going to explode. A countdown began.

“At that moment, it felt real,” said Officer James Wells, who has been with the force for less than two years. Wells said he noticed cameras attached to the RV.

“It felt like whoever was behind it was watching,” he recalled. Wells said he looked around to make sure no one was secretly watching them. Mentally, he started preparing for a possible shootout.

“All of the cop lingo that you hear about — the spider senses, about the hair standing up on the back of your neck — all that went through my body,” said Wells.

At one point, the RV started playing a recording of the song “Downtown” by Petula Clark. Then it switched back to the countdown, then back to the music. Some of the officers returned to their cars, blocking roads to set up a perimeter. A police sergeant ordered an evacuation, and officers started knocking on doors to get people out.

After knocking on doors, Wells said he went back to his car and pulled it back farther to get out of blast radius. He then got out of his car and started walking toward the RV. Suddenly, Wells said, he heard the voice of God telling him to turn around and check on Officer Amanda Topping, who was by herself on Broadway Street.

“It felt like I only took three steps,” Wells said.

“I just see orange,” Wells recalled. “And then I hear a loud boom. And as I’m stumbling — ‘cuz it rocked me that hard — I start stumbling, I just tell myself to stay on your feet, stay alive.”

Topping was walking toward Wells when the explosion pierced the calm.

“I just saw the biggest flames I’ve ever seen,” Topping recalled. “I’ll never forget the windows shattering after the blast all around me.”

“I felt a push,” said Officer Michael Sipos. “I was thrown into the trunk, a little bit. I turned around to see a very orange sky and a lot of smoke.” Officer Brenna Hosey said she was knocked to the ground.

Topping felt a wave of heat, she said, motioning to her face. She couldn’t see Wells, who was close to the blast. She took off in a sprint, eventually finding Wells, who told her to take out her gun. The two of them grabbed each other and ducked into a doorway to prepare for whatever might happen next.

“It just felt like something out of a movie,” Wells recalled. Another officer was yelling at him, asking him to do something — but he had temporary hearing loss from the blast. An ambulance wanted to take him to the hospital, but when Wells learned that three people were injured, he told the paramedics to check on the civilians first.

Wells, who said he’s a spiritual person, credited his survival to the voice in his head that told him to walk in the opposite direction.

“That’s what saved my life,” Wells said. “That’s what got me to see my kids and my wife on Christmas. ‘Good to see you’ has a completely different meaning to me now.”

Wells said the experience will tie him to his fellow officers for the rest of their lives. After the news conference was over, Wells and Hosey embraced. For several seconds, they stood in silence, simply holding each other.

NPR’s John Burnett and Reese Oxner contributed to this report.