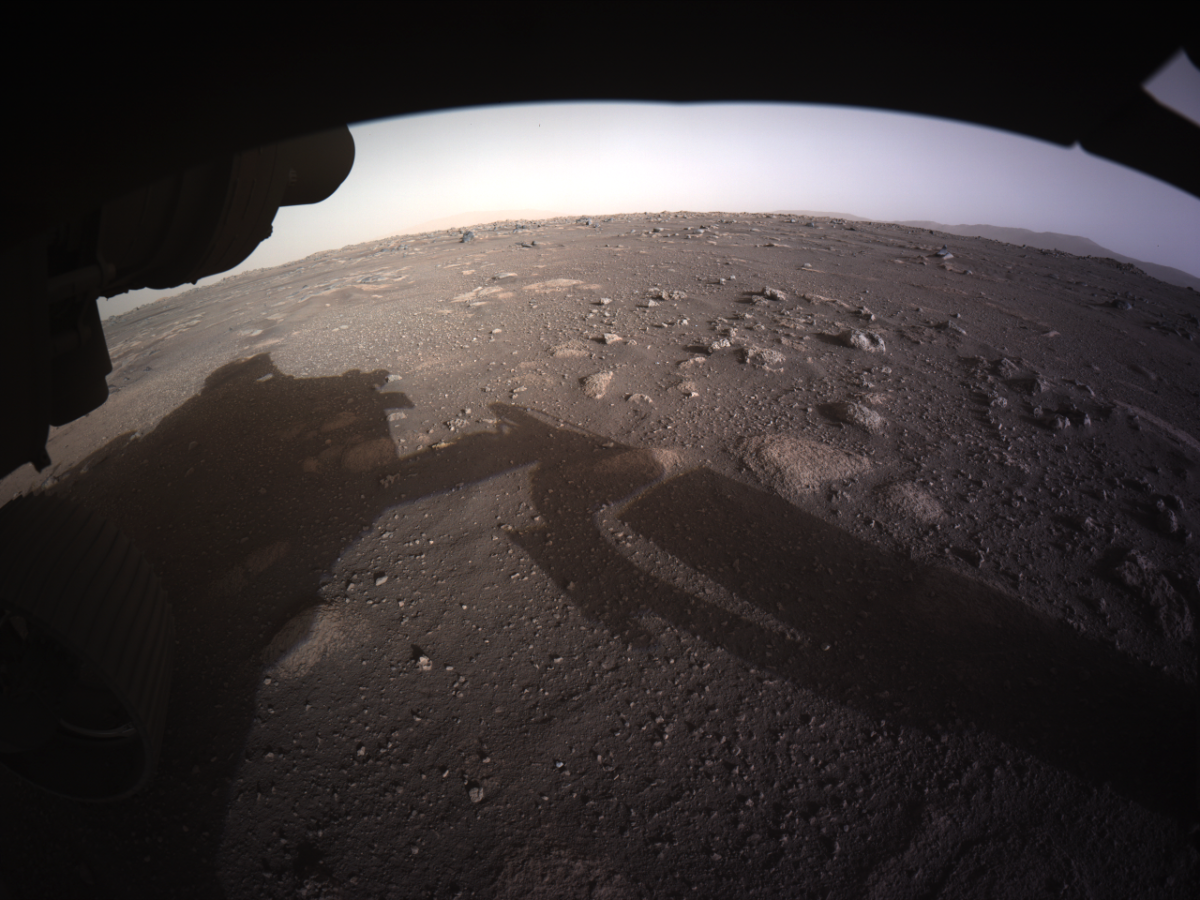 This is the first high-resolution, color image to be sent back by the Hazard Cameras (Hazcams) on the underside of NASA’s Perseverance Mars rover after its landing on Feb. 18, 2021. Photo: NASA/JPL-Caltech

After a seven month journey hundreds of millions of miles through the solar system, NASA’s Perseverance rover began beaming back images from Mars only hours after landing Thursday.

The first color images from Percy’s engineering cameras show a reddish-brown Martian surface and a whitish-blue sky, and a surface peppered with porous rocks and pebbles.

“We were kind of in this weird dream-like state. We can’t actually believe that this is what we’re seeing right now at this moment,” said NASA’s Pauline Hwang.

This high-resolution image shows one of the six wheels aboard NASA’s Perseverance Mars rover, which landed on Feb. 18, 2021. Photo: NASA/JPL-Caltech

The first color images from the rover came from its engineering cameras, lower-resolution hardware used to determine the safety and health of the rover. Along with the landscape view, NASA released an image of the vehicles wheels which showed a surface filled with hole-filled rocks.

“There are a number of different geological processes that can make holes in a rock like that,” said deputy project scientist Katie Stack Morgan. “The science team is now thinking about what this might mean. One of the questions we’ll ask first is whether these rocks represent a volcanic or sedimentary origin and both of those would be equally exciting.”

NASA also received images from the entry, decent and landing (EDL) phase of the mission. Perseverance was lowered to the surface using a rocket-powered crane and nylon cables. The team at NASA is still processing the video from the landing, also called the “seven minutes of terror.” It will be the first time engineers captured video of the harrowing EDL maneuver. NASA plans to release that footage sometime next week.

This high-resolution still image is part of a video taken by several cameras as NASA’s Perseverance rover touched down on Mars on Feb. 18, 2021. A camera aboard the descent stage captured this shot. Photo: NASA/JPL-Caltech

In addition to the engineering cameras, the rover is equipped with higher-powered imaging hardware and scientists expect even more impressive images over the next days and weeks.

Perseverance is on the hunt for signs of ancient life on the red planet. It landed in Jezero crater, an ancient lake bed and river delta. Scientist think the rover could uncover evidence of organic material within the rocks of the crater.