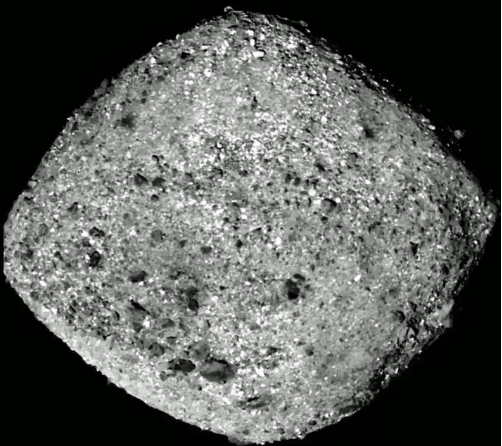 An up-close view of the asteroid Bennu taken by the OSIRIS-REx spacecraft. Photo: NASA/Goddard/University of Arizona

A NASA spacecraft arrived Monday at an asteroid after a more than two-year journey. The plan is to take a sample of “dirt” from the surface and send it back to Earth.

“We have arrived.” Mission controllers celebrated after receiving confirmation that the OSIRIS-Rex spacecraft had arrived at the diamond-shaped asteroid named Bennu, which is about the size of the Empire State Building.

The spacecraft will spend the next year surveying the asteroid before using a robotic arm to suck up a sample of regolith, or dirt, from the surface.

The asteroid is an astronomical time capsule. Scientists are eager to examine the nearly 4 billion-year-old sample, which could hold evidence of the creation of our solar system.

The two-ounce sample will return to Earth in 2023 and will be the largest cosmic sample collected since the Apollo missions.

The $800 million spacecraft launched from Cape Canaveral in 2016. Bennu is about 80 million miles away from Earth.

#WelcomeToBennu! After two years of travel – and more than a decade of planning and work by my team – I’m here. But Arrival is just the beginning… https://t.co/0bQPUwqUCp