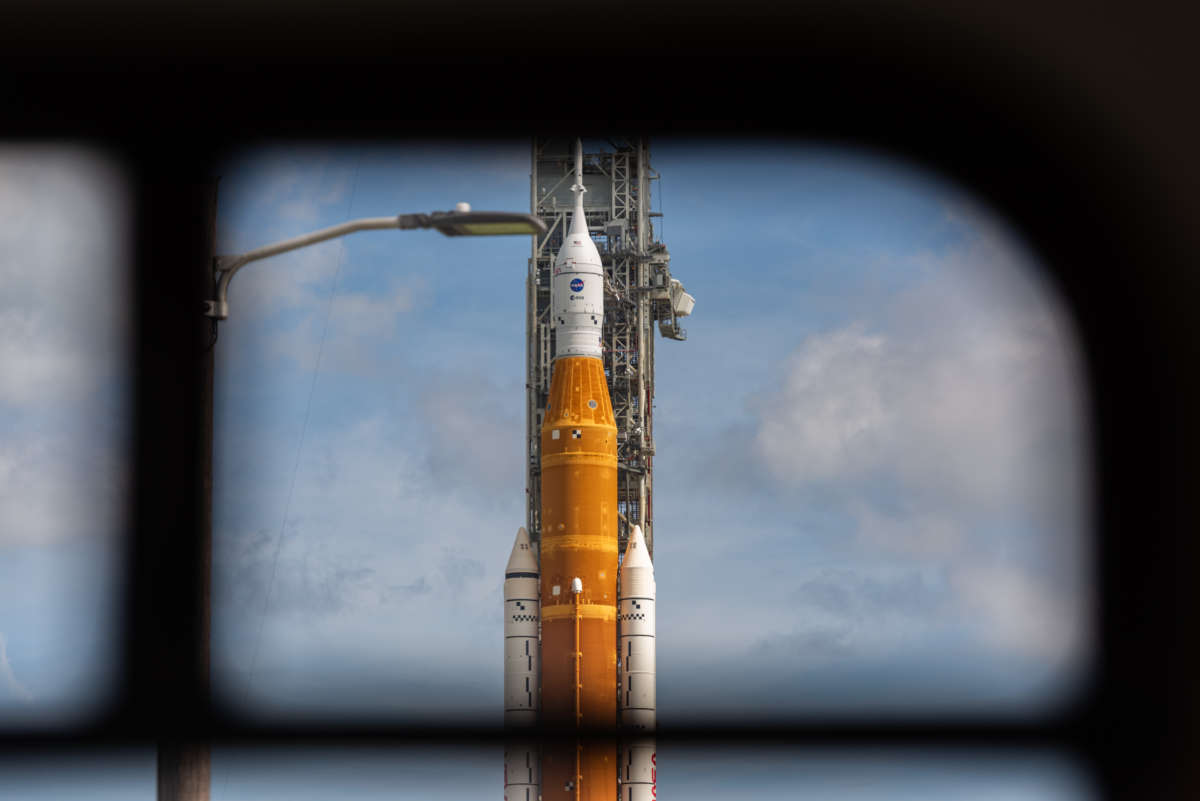 Artemis I stands on its launch pad ahead of Monday's launch attempt. Photo: WMFE / Brandon Moser.

NASA has called off a launch attempt of the agency’s next moon rocket — SLS — from the Kennedy Space Center in Florida.

The mission will use NASA’s SLS rocket to send the Orion spacecraft on an uncrewed mission to the moon, paving the way for future astronaut missions to follow.

One of the four engines on the massive rocket failed to get to the right temperature, prompting the Artemis One launch director to call off the flight.

The team encountered other problems during the launch attempt — including a fuel leak and a crack in the foam insulation on the rocket’s main fuel tank.

“To all of us that gaze up at the moon, dreaming of the day humankind returns to the lunar surface — folks, we’re here,” said NASA administrator Bill Nelson. “We are going back. And that journey, our journey begins with Artemis I.”

This first flight will carry no crew, but serve as a critical test of NASA’s Orion space capsule, designed to take astronauts to lunar orbit. A second mission will carry astronauts on a similar trip around the moon and back. The third flight will get them to the lunar surface.

NASA’s Stu Mclung  is an engineer working on the Orion capsule. He says the engineering team is confident in the planning and testing of the vehicle — and is ready for launch.

The launch of Artemis I begins a six-week mission that will orbit the moon, testing critical systems on the spacecraft before returning to Earth and splashing down in the Pacific. While there’s no crew on board, NASA is sending three test dummies wired with sensors to measure the effects of deep space for future astronauts.

“You want to see the ground team, the contractor team, the integration team, all those teams in Mission Control coming together, and kind of hitting their stride,” said Doug Hurley, a former astronaut who commanded the first human mission of SpaceX’s Crew Dragon capsule in 2020. He now works for Northrop Grumman, the company supply the solid rocket boosters fr SLS. “I think we’re ready for that now. And this is that next test is the uncrewed test flight.”

The mission will bring the Orion spacecraft as close a 60 miles and as far as 38,000 miles from the lunar surface before returning the capsule home, splashing down in the Pacific ocean.