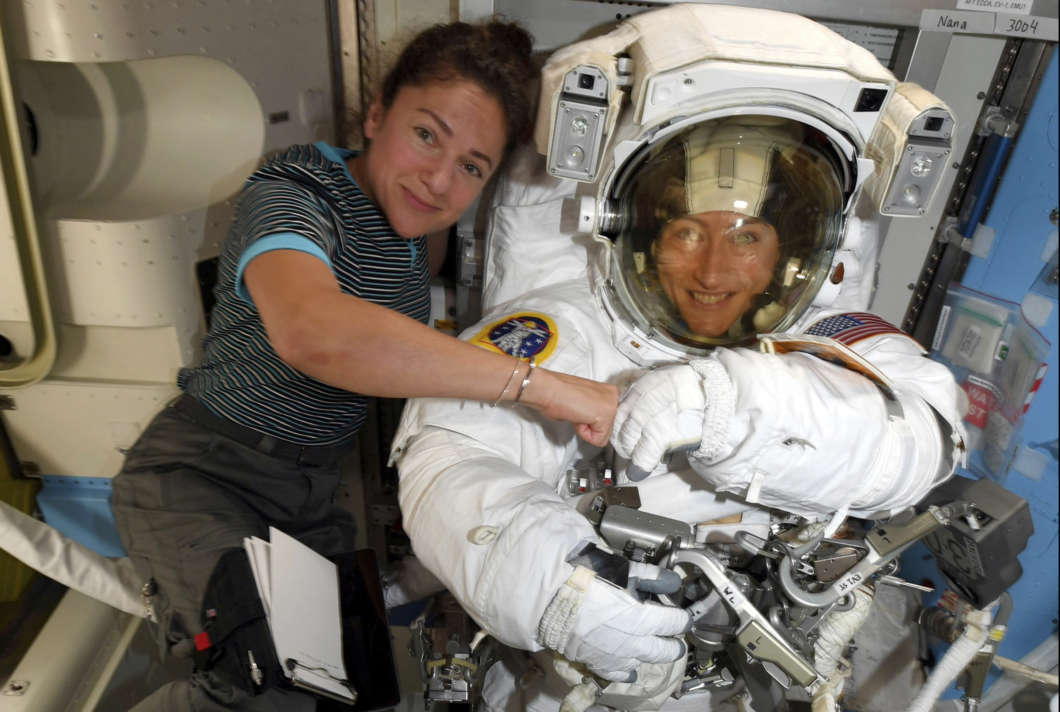 Astronauts Christina Koch (right) and Jessica Meir pose for a photo on the International Space Station on Oct. 4. NASA moved up the first all-female spacewalk because of a power system failure at the space station.

The first all-female spacewalk in NASA’s 61-year history is finally happening and will even take place a few days ahead of schedule.

Astronauts Christina Koch and Jessica Meir, who were initially supposed to venture beyond the International Space Station on Oct. 21, are now slated to make their historic excursion this Friday. NASA announced the scheduling and other changes this week in light of issues with the space station’s battery charge-discharge unit, which Koch and Meir will replace. The International Space Station’s Twitter account tweeted Tuesday evening that the spacewalk will take place “no earlier than Friday,” updating NASA’s earlier announcement that it would happen either Thursday or Friday morning.

“We do anticipate that will stick,” NASA spokesperson Stephanie Schierholz told NPR in an email.

Friday’s spacewalk is set to begin at 7:50 a.m. EDT and last about 5 1/2 hours, according to NASA. The two astronauts will replace the faulty power regulator, which has been in operation since 2000 and failed to activate after new lithium-ion batteries were installed on the space station last week. NASA said the unit failure did not pose risks to any of the station’s operations, crew members, laboratory experiments or overall power supply. Still, the faulty unit prevents the new lithium-ion batteries from providing additional power to the station.

NASA announced this fall that it was planning 10 spacewalks over three months, a pace the space agency said it had not experienced since assembly of the International Space Station was completed in 2011. Three battery replacement spacewalks will be rescheduled, and five spacewalks to repair a cosmic particle detector remain on the calendar for November and December.

Kathryn Sullivan became the first American woman to complete a spacewalk, in October 1984, and there have been 220 spacewalks at the International Space Station since December 1998. But according to Space.com, only 15 women have participated in spacewalks, and all were accompanied by men. This record-breaking spacewalk will be Koch’s fourth and Meir’s first.

In a NASA TV video this month, the two discussed how they felt about having their accomplishments discussed in terms of gender, agreeing that it is important to mark the progress that female astronauts have made.

“In the past, women haven’t always been at the table, and it’s wonderful to be contributing to the human spaceflight program at a time when all contributions are being accepted, when everyone has a role, and that can lead in turn to an increased chance for success,” said Koch, who has been in space since March and is scheduled to remain in orbit until February 2020. She is on track to set a record for the longest single spaceflight by a woman, breaking Peggy Whitson’s record of 288 days from November 2016 to September 2017.

An all-female spacewalk was originally planned for March, but NASA swapped out astronaut Anne McClain because of a lack of “spacesuit availability.” Only one of the two medium-size suits on the space station was prepped for a spacewalk, so astronaut Nick Hague — wearing a size large — accompanied Koch on the March walk instead. McClain, who returned to Earth in June after spending 204 days in space, tweeted words of support for Koch and Meir on Tuesday, calling their four-person crew “the A-team.”

Third spacewalk in a busy season of spacewalks this week. Date is unknown bc the task was unforeseen: replacing a unit that failed during power-ups of new batteries. Very good that we have 4 expert spacewalkers on board to shoulder this tough task. They are the A-team! https://t.co/pJKrOGbBbe

Koch and Meir are both members of NASA’s 2013 Astronaut Class, an eight-person cohort with an equal number of men and women. Meir told NASA TV that gender is not necessarily something she thinks about on a daily basis.

“It’s just normal. We’re part of the team. We’re doing this work as an efficient team working together with everybody else,” she said. “So it’s really nice to see how far that we’ve come.”