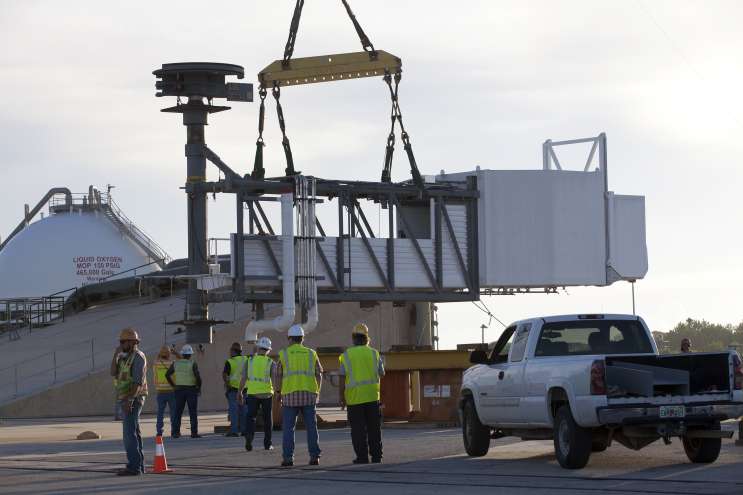 The 50-foot-long, 90,000-pound Crew Access Arm is hoisted off the ground to be installed on the Crew Access Tower at SLC-41. Photo: NASA/Kim Shiflett

Since the end of the Space Shuttle program five years ago, NASA relies on Russia to send astronauts to the International Space Station. NASA hopes to change that by paying private companies to ferry astronauts. That program, called Commercial Crew, is making headway this week.

NICOLE CRESTON: What is the Commercial Crew Program?

BRENDAN BYRNE: Nicole, as you mention, Commercial Crew was designed to help fill that gap of sending astronauts to space from US soil when the shuttle stopped flying. It was a multi-step process that awarded about a half-dozen private companies with funding to help develop new crew transportation technology. Those companies include Boeing, SpaceX, Blue Origin, ULA and Sierra Nevada. NASA ultimately awarded SpaceX and Boeing the contracts to actually launch astronauts to the station.

CRESTON: How are they going to do that?

BYRNE: Each company is designing a new crew capsule SpaceX is working on the Crew Dragon, or Dragon 2. That launches on top of a Falcon 9 rocket. Boeing is developing the CST-100, or what they call the Starliner. That launches on top of a ULA Atlas five rocket. Now both of these spacecraft are capsule designs – so they look more like the capsules of the Apollo era than a space shuttle.

CRESTON: These companies are making progress on getting ready to test and fly to space – what’s going on this week?

BYRNE: Earlier this week, Boeing and United Launch Alliance installed the crew access arm at Launch Complex 41. Astronauts ride an elevator to the top of the launch tower and walk across this bridge to hop into the Starliner capsule. At the end of the crew access arm is the white room – that’s where technicians can make last minute adjustments to the astronaut’s suit before strapping into the capsule. So that launch pad is getting ready to get to work. SpaceX is working on modifying Launch Complex 39A for commercial crew vehicles – that’s the same pad where the Shuttles were launched from.

CRESTON: What else needs to be done to prepare for these commercial crew flights?

BYRNE: There’s another construction project happening this week – although it’s not here on Earth. Astronauts on the International Space Station are planning an EVA – that’s a spacewalk – to install the International Docking Adapter. This is a docking port that will allow both Boeing’s Starliner and SpaceX’s Dragon 2 to park at the Space Station. What’s pretty cool about this adapter is that it has a bunch of sensors on it. So when the capsule gets close to the station, it can actually park itself! Other than making space-parking a bit easier, another adapter on the station means they can have more crew capsules parked at one time. When astronauts are on station, there’s always one crew capsule left there as a life boat in case of an emergency. With additional ports – and additional crew capsules – it will up the capacity on the station. So more astronauts on the station at one time.

CRESTON: So the launch pads are getting ready, the space station is prepping for astronauts – what’s left to do?

BYRNE: NASA established some pretty strict safety guidelines – these programs are sending human beings to space after all. So there’s a lot of testing. We’ve already seen some major testing milestones reached – like launch abort tests and parachute tests. Starting next year, both SpaceX and Boeing will conduct uncrewed test flights of the vehicles. This time next year, SpaceX is scheduled to launch a crewed test mission – with Boeing following in 2018.

CRESTON: Why did NASA decide to go with private companies, rather than developing their own space craft.

BYRNE: For one, it was a budget decision. Also, by outsourcing the transportation of astronauts to the space station, NASA can focus their resources onto other programs. Right now, that’s their ambitious program to put humans on Mars. As Boeing and SpaceX are working on their crew vehicles, NASA is developing a deep-space crew vehicle called Orion, and the rocket that will launch it to deep space. They call that the Space Launch System, or SLS.