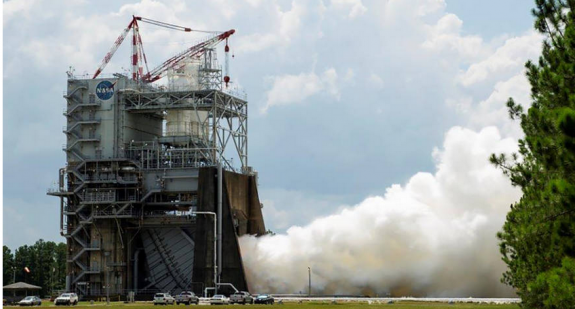 During a 535-second test on July 17, 2015, operators ran the RS-25 through a series of power levels, including a period of firing at 109 percent of the engine’s rated power. Photo: NASA

NASA’s testing out an engine that could one day carry astronauts to Mars.

The RS-25 engine is one of four that will power NASA’s Space Launch System (SLS) that will carry the Orion capsule to deep space destinations like Mars.

The nearly 9-minute test fire will simulate the heat and pressure stresses the engine will face during liftoff.

They’ll also test a new control system in the engine – which will regulate fuel and thrust during firing.

The test is being conducted at the A-1 test stand at the Stennis Space Center in Mississippi. The facility was used to test Apollo and Shuttle engines.