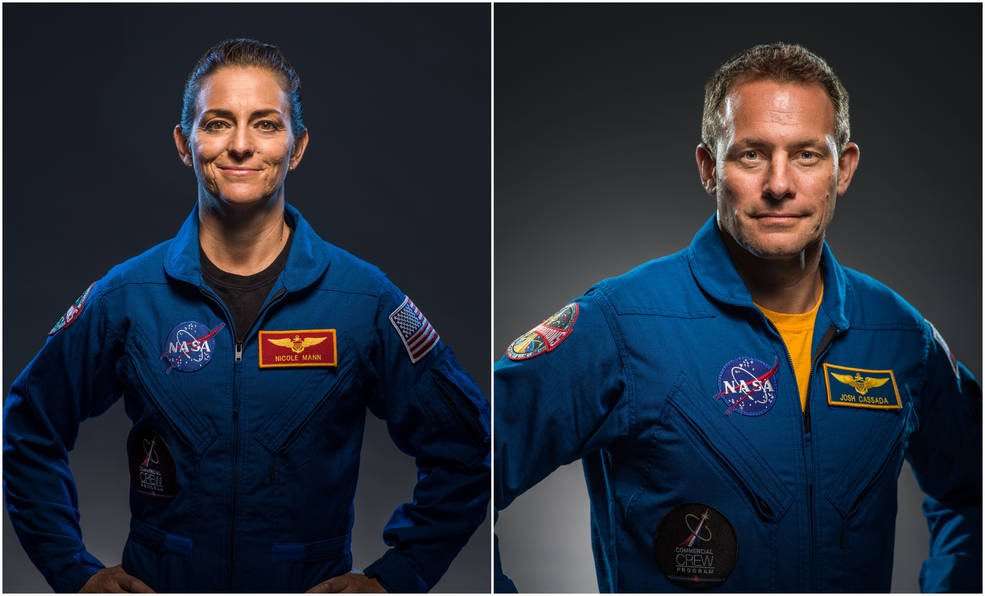 NASA's Nicole Mann (L) and Josh Cassada (R) were training on Boeing's Starliner spacecraft, but delays of the program prompted NASA to move them to SpaceX's Crew Dragon on a mission launching fall 2022. Photo: NASA

The delay of Boeing’s Starliner spacecraft is prompting NASA to reassign two of its astronauts to SpaceX’s Crew Dragon capsule on a mission to the International Space Station next year. NASA works with the two private aerospace companies to transport its astronauts to the station and back.

SpaceX’s Crew Dragon capsule has launched three astronaut missions since last year. But Boeing is still trying to certify its vehicle for human spaceflight and is working through a lengthy delay after a failed attempt at an uncrewed launch of the vehicle earlier this year.

It’s the second attempt by Boeing to launch an uncrewed mission to the International Space Station, part of NASA’s certification process to let astronauts fly on the vehicle. In 2019, a test mission failed to reach the space station due to a software error. A second attempt at that test flight in August was called off due to an issue with fuel valves on the spacecraft.

While Boeing continues to work out the cause of the issue, NASA said due to scheduling at Cape Canaveral and on the space station an attempt to refly that mission won’t happen until at least 2022.

Because of the delay, the agency is moving astronauts Nicole Mann and Josh Cassada over to a SpaceX mission called Crew-5 slated to launch fall 2022.

Mann and Cassada, both spaceflight rookies and waiting for their first mission into space, had been training on Boeing’s vehicles since 2018. The shuffle gives them crucial spaceflight experience.

“It was just the right time in their career to make this change,” said Steve Stitch, manager of NASA’s Commercial Crew program. “We really wanted to get Nicole and Josh some experience and get them into space as soon as we can.”

Mann is a colonel in the Marine Corps and F/A-18 test pilot. She was selected as a NASA astronaut in 2013 and was named to the agency’s Artemis Cadre, a group of astronauts training for future moon missions.

“I am thrilled to have the opportunity to train on another new spacecraft – the SpaceX Crew Dragon – and appreciate the teams at NASA who have made that possible,” she said. “I am ready to fly and serve on the International Space Station.”

Cassada is a physicist and Navy test pilot. He was also selected as an astronaut in 2013.

“It has been great to spend the last few years training with the joint Boeing and NASA team, and I am really looking forward to now have a chance to also train with SpaceX on a new spacecraft,” he said. “Cross training on both programs is a unique opportunity to learn, but also to provide valuable insight to future astronauts flying these spacecraft.”

NASA astronauts Butch Wilmore, Mike Fincke, and Suni Williams, who were assigned Starliner missions, will continue to work and train with Boeing for future flights. Astronaut Jennette Epps, another spaceflight rookie, is still assigned to the Starliner vehicle, flying on its first scheduled crew mission. In a blog post, NASA said Epps is currently cross-training on both Boeing and SpaceX’s vehicles.