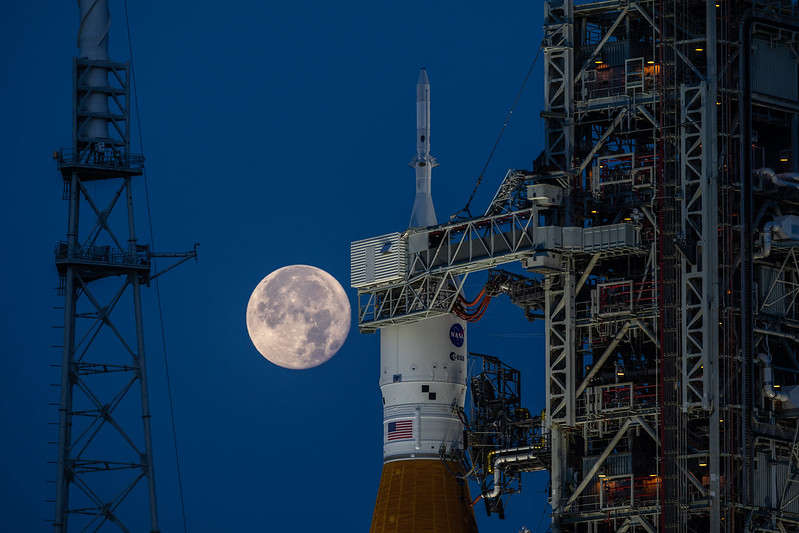 A full Moon is in view from Launch Complex 39B at NASA’s Kennedy Space Center in Florida on June 14, 2022. The Artemis I Space Launch System (SLS) and Orion spacecraft, atop the mobile launcher, are being prepared for a wet dress rehearsal to practice timelines and procedures for launch. Photo: NASA/Ben Smegelsky

NASA made a big announcement — it set a launch date for its big new rocket that’s set to fly humans to the moon. This first test mission called Artemis I won’t have anyone on board but it’s an important and long-delayed launch.

NASA says its more than 300 foot tall SLS rocket and Orion spacecraft will blast off from the Kennedy Space Center in Florida. The agency is targeting three possible launch opportunities on August 29, September 2 and September 5, sending the deep space vehicle and three mannequins on a more than a month-long mission around the moon and back.

“This is the first time that we’re gonna try and launch this vehicle. We’re gonna be careful,” says NASA’s Jim Free. On a call with reporters Wednesday, NASA leadership stressed that these are target dates and anything from weather to technical hiccups could cause mission managers to take pause.

“We’re gonna work hard to meet the attempts on those dates and do our best to position ourselves to have the confidence in those dates.”

This launch is the beginning of a series of increasingly complex missions aimed at landing humans on the moon the first since the Apollo program more than a half-century ago.

This mission dubbed Artemis I will serve as a pathfinder, testing critical systems of the vehicle like life support and its heat shield. Artemis II will follow a similar trajectory but with astronauts on board. And Artemis III will carry people bound for the lunar surface. The agency says those next moonwalkers will include a woman and person of color.

The announcement was a long time coming.

“With all large programs that NASA runs, it has been long delayed and it has been way over a budget and continues to be as we look forward to the first human lunar landing, which is currently scheduled for 2025 — but is likely to slip,” says Laura Forczyk, a space policy analyst and founder of the consulting firm Astralytical.

An internal NASA audit last year found the agency will spend up to $25 billion through 2025 on the program, with each mission costing $4 billion per launch.

And there’s still much more work to do. NASA hopes to build a space station around the moon and the agency is working with private company SpaceX to build the first lunar lander. Parts for that moon station still haven’t left Earth as SpaceX continues critical flight testing of the lander.

Still, says Forczyk, the announcement of a launch date for this first uncrewed Artemis mission is a big step. “It finally feels real because not only do we have a rocket and a mission, we have a launch date or at least a launch range.”

The announcement came on the same day as another important NASA lunar milestone. It was 53 years ago that Neil Armstrong and Buzz Aldrin became the first people to walk on the moon.