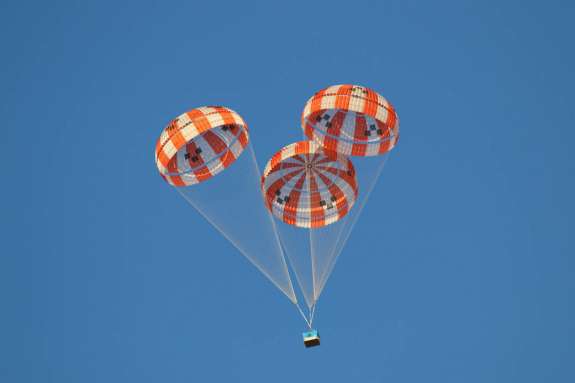 NASA plans to put the Orion spacecraft’s parachutes to the test, but not all the chutes will deploy – and that’s what engineers want.

A C-17 transport aircraft will drop a mockup of the Orion spacecraft from 35,000 feet above the Army’s Yuma Proving Ground in Arizona.

But two drogue chutes and one main chute won’t open – and that’s on purpose. Engineers want to know how the parachutes will work if something goes wrong.

It’s another step in testing the capsule that NASA hopes will one day take astronauts to asteroids and Mars.

Last year, the Orion capsule – and parachutes – performed flawlessly during an unmanned test flight from Cape Canaveral. The parachutes slowed Orion down from 20,ooo mph to just 20 mph before splashing down in the Pacific Ocean.