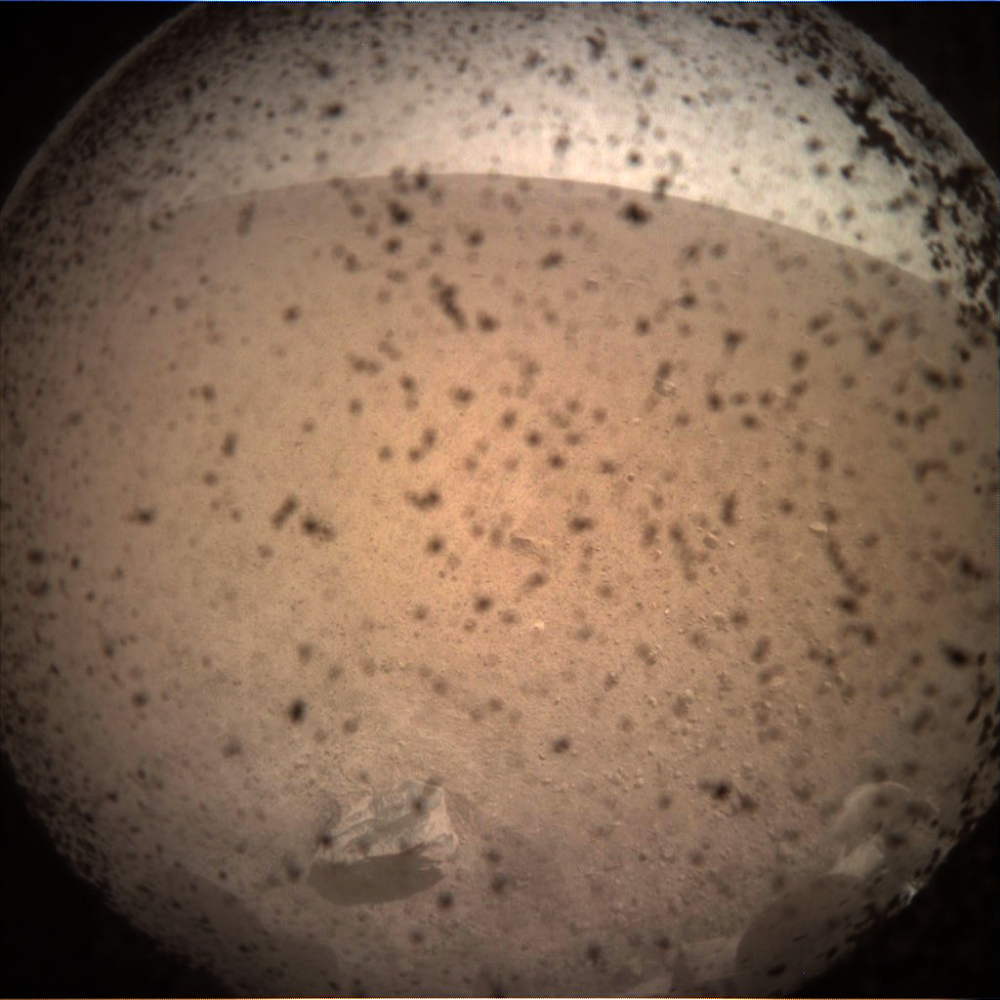 This is the first image taken by NASA’s InSight lander on the surface of Mars. The instrument context camera (ICC) mounted below the lander deck obtained this image on Nov. 26, 2018, shortly after landing. The transparent lens cover was still in place to protect the lens from any dust kicked up during landing. Photo: NASA/JPL-Caltech

NASA is celebrating the successful landing of another robotic probe on the surface of Mars. The probe will be the first to explore what’s beneath the Red Planet’s surface, and much of its journey was mapped out at Kennedy Space Center.

NASA’s InSight lander entered the Martian atmosphere at nearly 13,000 miles an hour before slowing and landing on the surface six minutes later.

It was a white-knuckle few moments at NASA’s Jet Propulsion Laboratory in Pasadena, California, as mission controllers watched the craft’s telemetry data. After hearing “touchdown confirmed,” people hugged, shook hands, exchanged high-fives, pumped their fists, wiped away tears and danced in the aisles.

Much of the spacecraft’s six month, 300 million mile trip was charted by trajectory analysts at Kennedy Space Center like Caley Burke. She said her team at NASA’s Launch Services Program created more than 900 launch trajectories to make sure the spacecraft got to where it needed to be at the right time.

The 800-pound spacecraft launched from Vandenberg Air Force Base in California, a rare event for a U.S. spacecraft heading to another planet.

“We like to think of launching to Mars like we’re a quarterback and we’re throwing to our receiver, but we’re a psychic quarterback,” said Burke in an interview ahead of the launch.

“Landing on Mars is one of the hardest single jobs that people have to do in planetary exploration,” said InSight’s lead scientist, Bruce Banerdt. “It’s such a difficult thing, it’s such a dangerous thing that there’s always a fairly uncomfortably large chance that something could go wrong.”

Two tiny satellites, cubesats named MarCO, followed as the spacecraft made its way to Mars, beaming data back to Earth in nearly real-time, including the first image from the surface just minutes after landing.

The InSight spacecraft will examine what’s below the Martian surface. The lander will use its 6-foot robotic arm to place a mechanical mole and seismometer on the ground. The self-hammering mole will burrow 16 feet (5 meters) down to measure the planet’s internal heat, while the seismometer listens for possible quakes. The findings will provide information to scientists about how the rocky planet formed.

It’s NASA’s eighth successful attempt at landing on the Red Planet. The agency last landed on Mars in 2012 with the Curiosity rover.