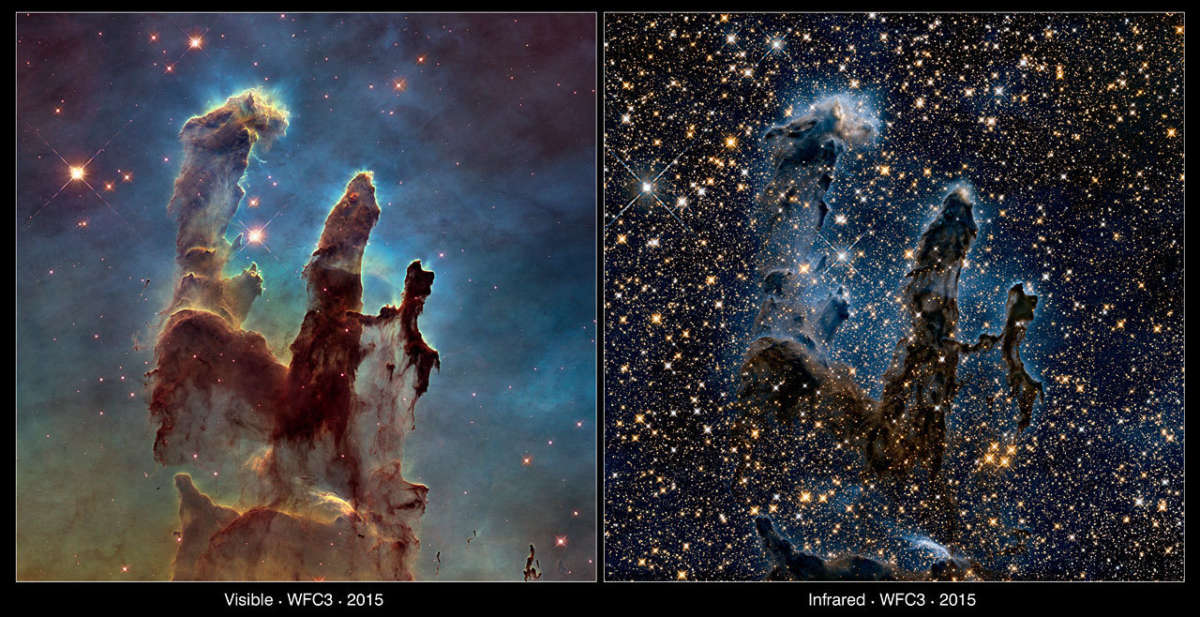 Two views of the Eagle Nebula's "Pillars of Creation," both taken by the Hubble Space Telescope. The left shows the pillars in visible light; the right image was taken in infrared light.

In December, NASA is scheduled to launch the huge $10 billion James Webb Space Telescope, which is sometimes billed as the successor to the aging Hubble Space Telescope.

The new telescope, the largest and most powerful ever put into space, will travel to a lonely spot 1 million miles from Earth, where it will be able to peer out into the farthest reaches of the universe.

After a setting-up period of about six months, NASA will unveil the telescope’s first images to the public.

“Will Webb images look as gorgeous as Hubble images? Will we love them not just as scientifically valuable, but are they gonna knock our socks off? I’m pretty sure they are,” says Jane Rigby, a NASA astrophysicist on the James Webb team.

But the new telescope has some important differences that will affect what kinds of science it can do and what kinds of images are sent home. Its primary mirror is 21 feet across and covered in gold, and it’s far larger than Hubble’s mirror. That will let Webb collect far more light and see much more distant galaxies. The telescope will also aid the search for possible signs of life on Earth-size planets in other solar systems by letting scientists analyze the tiny amount of starlight that filters through those planets’ atmospheres.

A generation of iconic Hubble images

For three decades, the public has gotten used to space as seen through the eyes of Hubble. “I think Hubble certainly is the first telescope where the images appeared everywhere,” Rigby says. “I have socks with Hubble pictures on them. I’ve seen them on the sides of a U-Haul going down the highway.”

The Hubble images, she says, hit us “in this kind of awe-inspiring, connected to everything, maybe spiritual way.”

It wasn’t always like that. After Hubble launched into orbit around the Earth in 1990, the first images it sent back were unexpectedly fuzzy. Its mirror turned out to have a tiny flaw, and this Hubble trouble made the telescope a household name as late-night comedians and comic strips mocked its poor vision.

Just a few years later, however, astronauts installed corrective optics. And what Hubble saw then was mind-blowing. Robert Hurt, an astronomer and visualization scientist with the California Institute of Technology/IPAC, remembers being at a science conference when some of Hubble’s first images were displayed. “It was like being at a rock concert,” Hurt says. “I mean, people were cheering.”

Big telescopes on the ground always had to look up through the Earth’s turbulent atmosphere, which has a distorting effect on the light that comes through, Hurt says. Hubble’s perch above all that, in orbit, gave it crisp, stunningly detailed views. Familiar stars and clouds of gas were suddenly transformed into gorgeous, glowing visions that got names such as the “Pillars of Creation.” Those celestial scenes became iconic.

While Hubble has gazed out at stars and galaxies, astronomers and engineers have been hard at work on the James Webb Space Telescope, which is named after a former NASA administrator. Its development has gone on far longer — and has been far costlier — than anyone anticipated.

This telescope’s massive mirror is divided into segments, so that it and a five-layer, tennis court-size sunshield can fold up inside a rocket and later unfurl. All of its technologies have to operate without a hitch, because unlike with Hubble, there’s no way to send up a repair crew.

Light takes time to travel through space, and Webb will be able to capture light that’s been traveling for almost the entire history of the universe. “Webb will be able to see galaxies as they looked a couple hundred million years after the Big Bang,” Rigby says.

The telescope can do this because it is optimized to see near- and mid-infrared light that’s invisible to people. Hubble, in contrast, primarily captures the kind of optical light that human eyes can see.

An infrared telescope such as James Webb not only can see older, colder objects, but it can also peer through dust that can obscure stars and other objects in Hubble images.

“A lot of those iconic Hubble images are because you are seeing dust scatter light all over the place, which is beautiful. But it makes it really hard to study the stuff that is inside,” says Nikole Lewis, an astronomer at Cornell University.

Deciding how to assign colors that our eyes can see to the various wavelengths of infrared light, she says, involves a little bit of artistic license.

But then there’s always been a certain amount of artistry in Hubble images, too. Hubble’s cameras send back black-and-white images. Vivid colors are added later — sometimes to mimic what our eyes can see and sometimes to highlight key scientific features such as the presence of oxygen or other elements.

And even though Hubble looks at the visible light spectrum, that doesn’t mean its view equals what people would see. If you could ride in a spaceship out to a nebula, a cloud of dust and gas, and then look out the window, it wouldn’t look like a glorious Hubble image.

“You would see the slightest faint haze in the sky,” Hurt says. “It would be very dark. Because the total amount of light that these nebulas emit isn’t very much, and our eyes are very small.”

He notes that Spitzer, another infrared space telescope that operated for about 17 years before shutting down in 2020, produced lots of stunning eye candy, though it was smaller and less powerful than James Webb will be. Spitzer was able to get images of the very center of the Milky Way galaxy, which is surrounded by particles of dust that prevent the passage of visible light.

Lisa Storrie-Lombardi, director of the Las Cumbres Observatory who was project manager for the Spitzer Space Telescope, expects that James Webb will produce its own iconic images.

“James Webb Space Telescope is a bigger telescope than both Spitzer or Hubble, and it’s going to take magnificent images in the infrared,” she says. “They will be beautiful.”

She recalls that once, early on in Spitzer’s mission, CNN posted one of this infrared telescope’s images and mistakenly called it a Hubble image.

“I knew Spitzer had really, you know, hit the big time,” she says, laughing, because for the public, Hubble has long been the gold standard for stunning outer space imagery.

The world will soon see how James Webb’s images measure up. If the launch takes place at the end of the year, as planned, the first pictures should arrive by next summer, once the telescope has been set up and adjusted and made ready to do science.

The James Webb team has a top-secret plan for what pictures it will release to the public first, Rigby says. Those pictures, she adds, “are intended to be jaw-droppingly beautiful, powerful, both visually and scientifically.”