NASA is bringing rocks back from Mars, but what if those samples contain alien life? 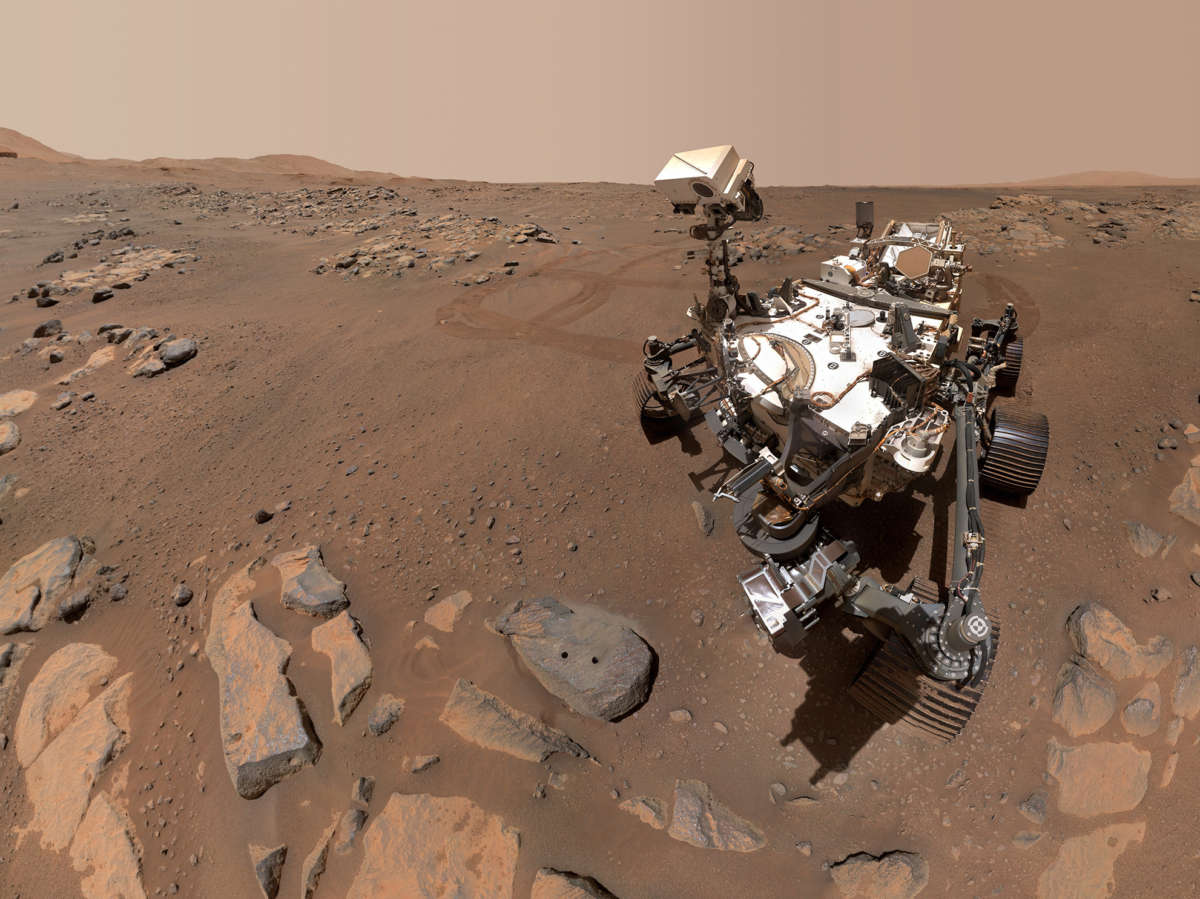 NASA's Perseverance rover took this "selfie" next to a rock where it drilled for samples. NASA wants to bring samples collected by this rover back to Earth.

NASA is planning its first-ever mission to bring dirt and rocks from Mars back to Earth — but before that momentous event happens, the space agency needs to figure out exactly how to protect our home planet from any alien microbes that might hitch a ride.

This week, the agency is holding public meetings and looking for feedback on its plan to land a spacecraft carrying Martian specimens at a U.S. Air Force testing range in Utah in the early 2030s.

“Maybe this is the most important environmental assessment that humans have ever done,” says Peter Doran, a geologist at Louisiana State University who studies life in extreme environments.

“I think that it’s a very low probability that there’s anything living at the surface of Mars,” says Doran, who also serves on an international committee devoted to planetary protection. “But there is a possibility.”

Having a rock sample from Mars here on Earth would let scientists run exhaustive lab tests to look for evidence of whether this cold, harsh, rocky world was once habitable and maybe even inhabited.

For scientists, this is a long-held dream

Talk of such a mission has gone on for decades, and it will cost billions of dollars to accomplish. Still, Doran says no one has thought through exactly how to handle Martian specimens. Questions like how to contain any potential microbes? Or what specific features are needed for the secure lab (or labs) that will house the rocks?

“Until recently, there hasn’t been a lot of focus on the details of the sample return facility and all that,” he explains, “because we didn’t think it was going to happen.”

Now, though, the effort appears to be on a fast track, with NASA officials collaborating with the European Space Agency and making plans to launch a set of retrieval spacecraft as soon as 2027 and 2028. To get ready, NASA’s Perseverance rover, which landed on Mars last year, has been drilling cylindrical samples of rock and sealing them inside metal tubes.

“We’ve got eight samples on board the rover now,” says Jim Bell, a planetary scientist at Arizona State University who is part of the Perseverance rover team.

He explains that the rover has been exploring an ancient crater on Mars that seems to have once had water. Occasionally, the rover drills out a cylindrical core of rock about the size of a dry-erase marker. The core then gets hermetically sealed into one of the rover’s 42 metal sample tubes.

Bell says a long-running joke among planetary scientists is that “Mars sample return has always been 10 years off.” But at long last, it truly does seem to be 10 years off, he says.

“I’m optimistic, right? We’re caching them, and we’re getting them ready to be picked up,” says Bell. “And so that is farther than the planetary science community has ever come before.”

NASA officials are hashing out a plan to safely collect the samples: A spacecraft would land on Mars and launch a container full of the previously collected rock samples into orbit around the planet. Once in orbit, this container could be engulfed by another container — like a big fish eating a little fish — to keep anything that had touched Mars inside.

It would then be sealed, and the seal would be heat-sterilized, says Brian Clement, a planetary protection expert with NASA’s Jet Propulsion Laboratory who is working on the mission.

“We’re applying very high heat. It’s going to be in excess of 900 degrees Fahrenheit,” he says. “We want to be able to break apart any biomolecules that might have activity of any concern.”

This is technically challenging, however, because scientists also want to keep the rock samples cold, as they were on Mars. “I liken this to welding your metal lunchbox shut while trying to keep your lunch nice and cold inside,” says Clement.

The sanitized container would then go into yet another container, which would also be sealed and put into the Earth-entry vehicle, which is what would eventually land in the Utah desert, without a parachute.

“We like to refer to it as a 90-mile-an-hour fastball, where the landing site is the mitt,” says Clement. “That 90-mile-an-hour landing, just like with a baseball, is well within the Earth-entry system’s capabilities.”

“We’re just going to bring it back and have it come back to the Utah desert, much like the Genesis solar-sample return mission, which, of course, broke up, broke open on impact,” says Barry DiGregorio, a science writer with a group called the International Committee Against Mars Sample Return, which has long opposed plans to bring Martian rocks directly to Earth.

“You could imagine what would happen if you have pathogenic organisms from another planet and you had that sort of event take place,” says DiGregorio.

But Clement says that multiple panels of scientific experts have weighed in on the risk of Mars sample return over the years and that “those panels have all agreed that the potential hazard is very, very low.”

Even so, he says, NASA is taking a conservative approach. “Anything that has contacted Mars directly will be contained or sterilized before it is returned,” says Clement.

And Bell says he’s not worried about the possibility that any Martian germs mixed in with the rocks might escape into the environment and cause problems or disease, “despite the fact that many science fiction fans out there are probably concerned about that.”

In his view, the main danger of a rupture or leak would be contaminating the precious Martian samples with Earth material. That’s why the samples will likely need to be opened in high-tech facilities that can replicate the environment and atmosphere of Mars, Bell says.

Public reaction to a special delivery from Mars

While the surface of Mars is currently dry, very cold and blasted with harsh ultraviolet radiation, LSU’s Doran says it’s still possible that microbes could eke out an existence in shielded cavities and holes or under the dust.

“The possibility is not zero,” says Doran, although he thinks it’s “highly unlikely.”

“We definitely have to take this stance of protecting Earth, at least in the early missions, until we know what’s there,” he says.

One of the few efforts to ascertain what the public thinks about bringing home Martian rocks was carried out back in the 1990s. That study found that “public perception of biological hazards associated with a Mars sample return mission is not seen as a large risk relative to other technological and environmental risks and hazards, such as nuclear technologies, food risks, and ozone depletion.”

But public perceptions might be different now, in part because of the coronavirus pandemic, says Margaret Race, one of the researchers involved in that 1990s study, who has worked on planetary protection with the SETI Institute.

“What we’re talking about is bringing it down in Utah in a great big desert and then you pick it up and you bring it to someplace else, a lab,” says Race, pointing out that people will want to know where that lab will be and exactly what protections will be in place.

“I can expect there will be lots of questions,” she says.

Even with many details left to be worked out, the prospect of a Martian rock being brought to Earth is just thrilling for scientists like ASU’s Bell, who has studied Mars for years.

“I just want to see this stuff with my own eyes,” says Bell. “We’ve been looking at this world through robotic eyes for so long, and I want to see that famous red dust and I want to see the insides of some of these rocks and little grains that may have formed in a watery environment 3 or 4 billion years ago.”