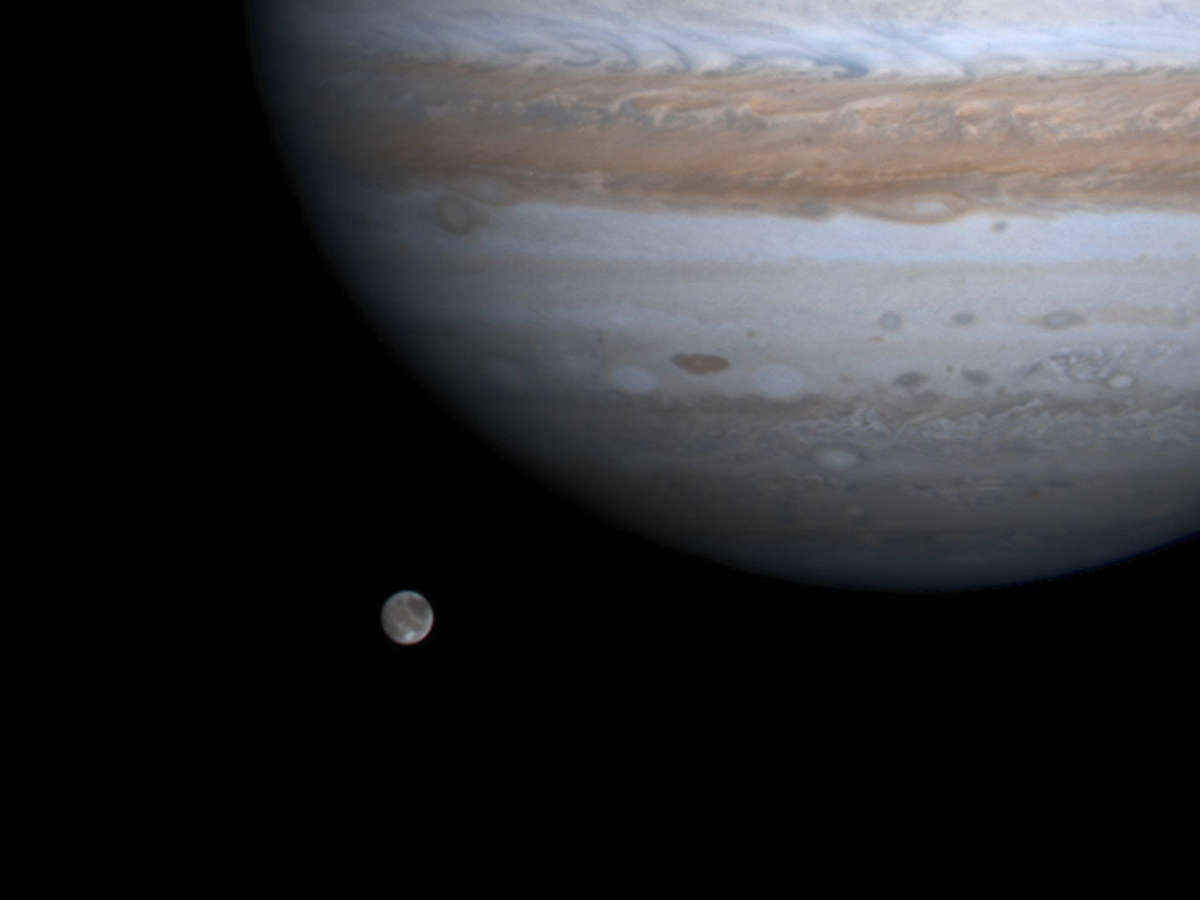 The solar system's largest moon, Ganymede, is pictured with Jupiter in a photo by NASA's Cassini spacecraft, Dec. 3, 2000. NASA's Juno mission will get close to Ganymede on Monday.
Image credit: NASA

Jupiter’s moon Ganymede will have a visitor from Earth on Monday. At 1:35 p.m. ET, NASA’s Juno spacecraft will zoom by, just 645 miles above the surface of the solar system’s largest moon.

It’s the first time a probe has made a close-up visit to Ganymede since the Galileo mission flew by in 2000.

Ganymede is an icy moon, and icy moons are attracting a lot of attention from planetary scientists these days. Ice is not unusual on moons, there’s even some on the Earth’s moon. But some of the large moons around the outer planets have significant amounts of water, and some are thought to have liquid oceans under their icy surfaces.

Researchers have come to understand that these watery worlds could be home to some kind of life, even though they are far from the sun. Gravitational tugging from the giant planets they orbit may help explain how the ice is able to melt.

Scientists used to think the heat would have to come from a planet’s star, in our case, the sun. “I think we’ve realized in the last few decades that the idea of habitability has extended,” says Scott Bolton of the Southwest Research Institute, who is principal investigator for the Juno mission.

Ganymede has one feature the other icy moons lack.

“Ganymede is the only one that has its own magnetic field,” says Katherine de Kleer, a planetary scientist at Caltech.

Earth’s magnetic field protects us from charged particles spewing from the sun. The magnetic field on Ganymede does something similar. “Except instead of the solar wind, the stuff that Ganymede’s surface is being protected from is all of this material that’s come off of Io,” says de Kleer. Io and Ganymede are among the four biggest moons of Jupiter. Io is the innermost moon and is volcanically active.

It’s not clear whether this protection increases the chance of finding some kind of life on Ganymede.

“The environment of Jupiter is pretty fierce,” says Margaret Kivelson, professor emeritus at UCLA and research professor at the University of Michigan. “So I wouldn’t be terribly thrilled about being the person to land on Ganymede.”

Kivelson was on the science team of NASA’s Galileo mission to Jupiter, the last one to visit Ganymede close up more than two decades ago.

But the Juno flyby should give scientists a better understanding of Ganymede’s magnetic field. It’s a complicated situation “because it’s a little magnetosphere orbiting within the enormous magnetosphere of Jupiter itself” says de Kleer.

In addition to studying the magnetic field, Juno’s Microwave Radiometer (MWR) will provide information about Ganymede’s water-ice crust. Other instruments will study the interaction between the charged particles that rain down on Ganymede and the moon’s thin atmosphere, and interaction that causes aurorae similar to the aurora known as the Northen Lights on Earth. Other instruments will study the aurorae on Ganymede.

And of course, there’ll be pictures.

“The images will be, I expect them to be spectacular,” says Bolton. There won’t be a lot of pictures. Juno will be traveling at about 12 miles per second as it speeds past Ganymede.

Juno will be flying over places that Galileo made images of when when it flew by, as well as when NASA’s Voyager space probe flew by in 1979.

“We’ll be able to look at those and detect potential changes that might have happened in that region before, since Voyager or Galileo took a look,” Bolton says.

Juno, which has a primary mission to study Jupiter itself, will return for closer looks at its other moons. Next year it will fly by another of the big four, Europa, and after that Io.