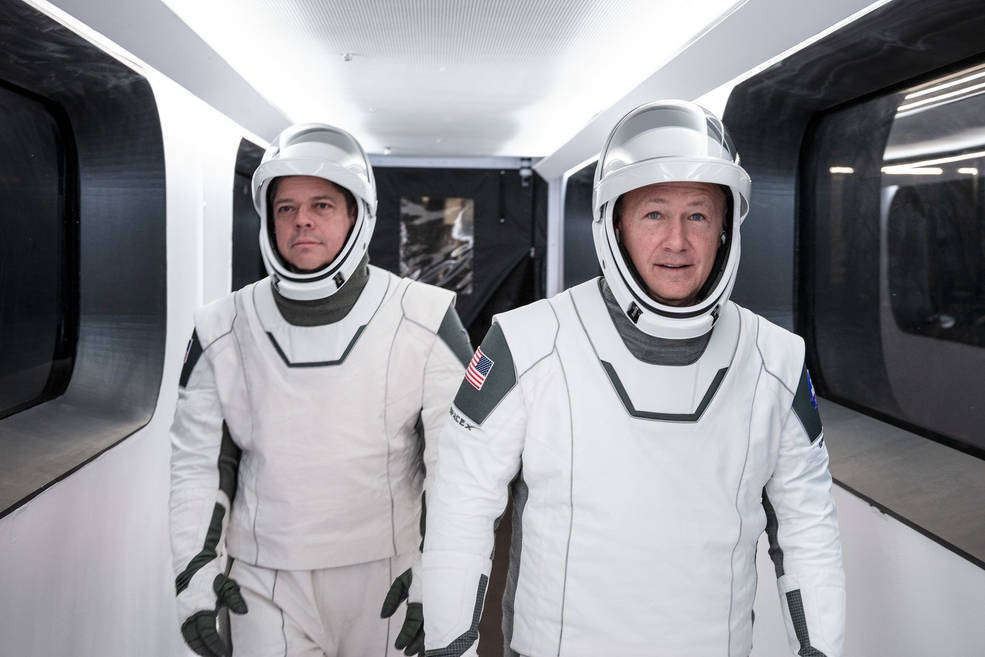 Doug Hurley is set to return to space this week aboard a SpaceX capsule. It’s the first time astronauts will depart from U.S. soil since the shuttle program ended in 2011.

Listen to the story on the player above, or read the transcript:

NASA astronauts will soar into space from the U.S. once again. They’ll launch from the Kennedy Space Center tomorrow, and this will be the first time astronauts have blasted off from the United States since the end of the space shuttle program in 2011. The pilot of that final space shuttle mission was Doug Hurley. Now, through a partnership with private company SpaceX, Hurley will head back into space. Brendan Byrne from member station WMFE in Orlando has more.

BRENDAN BYRNE, BYLINE: When Hurley and his crew cleared the tower on July 8, 2011, the future of human spaceflight after that last shuttle mission from Florida was uncertain. The program was ending, and a replacement ride from the U.S. to space was at least four years away from flying. Turns out, it’s been almost a decade. Now, thanks to a partnership with SpaceX, NASA will fly astronauts once more, and Hurley will once again fly to space.

BYRNE: Hurley joined the Astronaut Corps in 2000. The class named themselves the Bugs, after fears of the Y2K bug that gripped the world as they became astronauts. Hurley was selected for his test flight skills. He clocked more than 5,000 hours in military aircraft before joining NASA.

BYRNE: Terry Virts is a former astronaut and a Bug himself, a member of Hurley’s astronaut class.

VIRTS: He’s just solid, you know. He’s not going to make any mistakes. He’s going to stay cool no matter what happens. And he’s definitely a very good choice. I know why our bosses picked him for this job.

BYRNE: The focus of this mission will put Hurley’s test pilot skills to use. Named Demonstration Mission 2, Hurley and his crewmate Bob Behnken are tasked with flying SpaceX’s Crew Dragon for the first time. The duo will put the sleek capsule to the test, flying it using a touch screen and iPads before it docks with the International Space Station. Hurley has flown to space twice on two space shuttle missions to the ISS. His co-pilot for this SpaceX flight is Bob Behnken, another Bug. He says Hurley is cool under pressure and dedicated to the mission.

BOB BEHNKEN: I always know that Doug is going to be one step ahead of me and ready for whatever’s kind of coming in front of us. And so there might be things that I remind him out there. It’s like, hey, let’s throw this into the mix because we’re going to have to consider it. But he’s going to be the one who’s ready a second and a half before I am.

BYRNE: The mission is a critical test flight that, if all goes well, paves the way for more astronauts to fly to the station from the U.S. NASA is out of rides to the ISS from the Russian Space Agency, and a second commercial partner, Boeing, is facing delays getting its capsule certified for launch. The two will spend 18 hours in space, testing all the systems of the Crew Dragon capsule, from flying it in orbit to sleeping on board to testing the Crew Dragon’s toilet.

Retired astronaut Nicole Stott, yet another Bug, says Hurley understands the risk and importance of this mission, which is why he’s the perfect Bug for the job.

NICOLE STOTT: You also want to know that when it hits the fan, you know, when things don’t go as planned, as they will not always, that you have these people with you that will have your back and that they know you’ll have theirs. And that’s – I mean, you know, that’s Doug.

BYRNE: The craft is scheduled to launch tomorrow afternoon and dock with the ISS about 18 hours later, and the astronauts will spend between one and four months on the space station.

Copyright © 2020 NPR. All rights reserved. Visit our website terms of use and permissions pages at www.npr.org for further information.