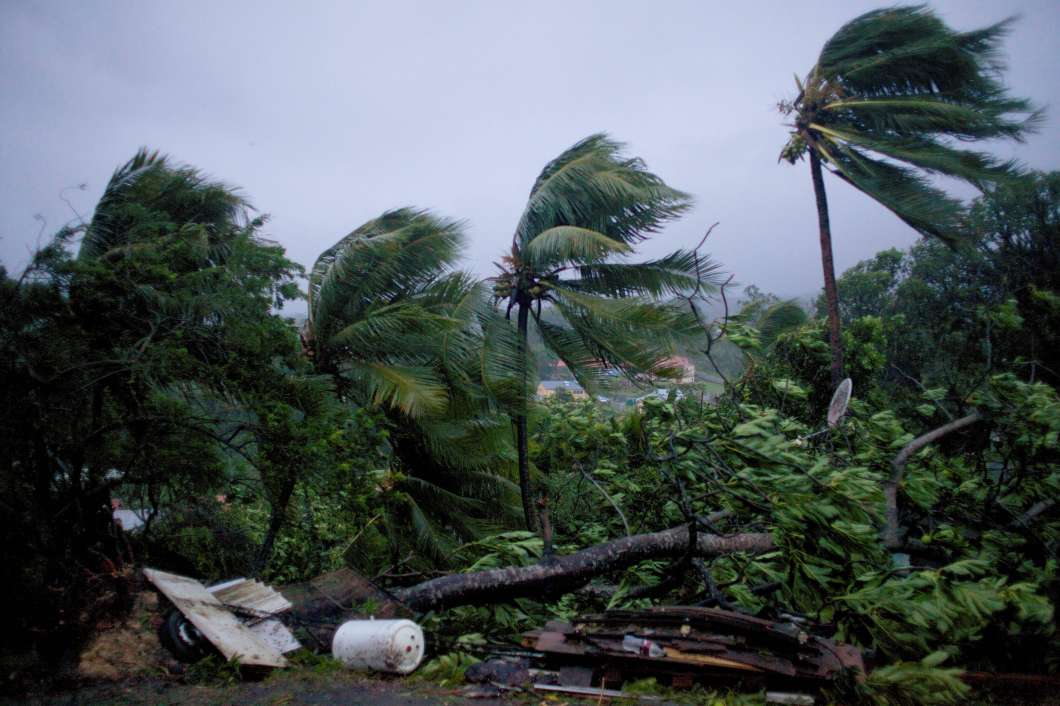 Powerful winds and rains of hurricane Maria batter the city of Petit-Bourg Monday on the Caribbean island of Guadeloupe.
Image credit: Cedrik-Isham Calvados

Hurricane Maria is barreling towards the U.S. Virgin Islands and Puerto Rico as a “potentially catastrophic” Category 5 hurricane, and is forecast to approach the islands tonight and tomorrow. It has already caused reports of “widespread devastation” on the island of Dominica.

“Preparations to protect life and property should be rushed to completion,” the National Hurricane Center stated in its advisory at 8:00 a.m. ET Tuesday, just two weeks after devastation in many of the same areas caused by Hurricane Irma.

In a series of posts on Facebook, Roosevelt Skerrit, the prime minister of Dominica, described the devastation to his own home.

“We do not know what is happening outside. We dare not look out,” he wrote Monday evening. “Certainly no sleep for anyone in Dominica. I believe my residence may have sustained some damage.”

This was followed by: “My roof is gone. I am at the complete mercy of the hurricane. House is flooding.”

Skerrit later confirmed that he had been rescued. But the fact that the island nation’s prime minister could see the roof fly off his own home highlighted the risks for the people living in the storm’s path.

“So, far the winds have swept away the roofs of almost every person I have spoken to or otherwise made contact with,” he wrote. “The roof to my own official residence was among the first to go and this apparently triggered an avalanche of torn away roofs in the city and the countryside.”

Hurricane warnings are also in effect for the islands of Guadeloupe, St. Kitts, Nevis, and Montserrat, and the British Virgin Islands, with other islands seeing Tropical Storm Warnings and Hurricane Watches.

The storm, with maximum sustained winds of 160 miles per hour, has fluctuated in intensity over the past day. That is likely to continue, the forecasters say. However, they add that “Maria is forecast to remain an extremely dangerous category 4 or 5 hurricane while it approaches the Virgin Islands and Puerto Rico.”

Maria is currently located about 85 miles west of the Caribbean island of Guadeloupe, moving west-northwest at about 9 miles per hour, according to the National Hurricane Center.

That’s expected to be accompanied by inches of rainfall – which “will cause life-threatening flash floods and mudslides.”

Maria is following a different projected path than Irma, NPR’s Bill Chappell reported. That means “Puerto Rico and other islands that suffered only glancing blows from Irma could now be directly confronted with hurricane conditions.”

Authorities in Puerto Rico are calling for “people in wooden or flimsy homes” to find shelter, The Associated Press reports.

“You have to evacuate. Otherwise, you’re going to die,” said Hector Pesquera, Puerto Rico’s public safety commissioner, according to the wire service. “I don’t know how to make this any clearer.”

On islands already devastated by Irma, there are fears that a second hit could cause an especially dangerous situation by kicking up piles of debris. BuzzFeed UK’s Jim Waterson, reporting from the British Virgin Islands, tells NPR:

“There is so much stuff on the island. There’s no where to put it, it’s just piled up by the sides of roads. … And if Maria came in and picked up shrapnel, essentially, picked up pieces of glass, picked up poles, this could be somehow more dangerous than the initial hit. Because at least then everything started off in one piece and was worn down. This time everything’s already broken up.”

The British military has sent reinforcements to the islands but there’s little they can do now, Waterson says. “There’s not much they can do right now, it’s just a case of waiting for the storm to pass and picking up the pieces afterwards.”